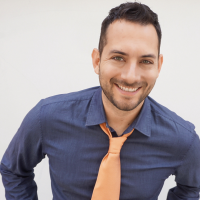 Born in Virginia, Aaron spent his childhood splitting time between Venezuela and the U.S. After graduating from Virginia Tech, he moved to Los Angeles to pursue a career in storytelling.

Constantly putting the pen to the paper, he found a writing home on the TNT show "Leverage". Following a two year stint on the show, Aaron moved on to more personal endeavors in both film and books. After writing and directing multiple festival films, he turned his attention to books, publishing multiple books. 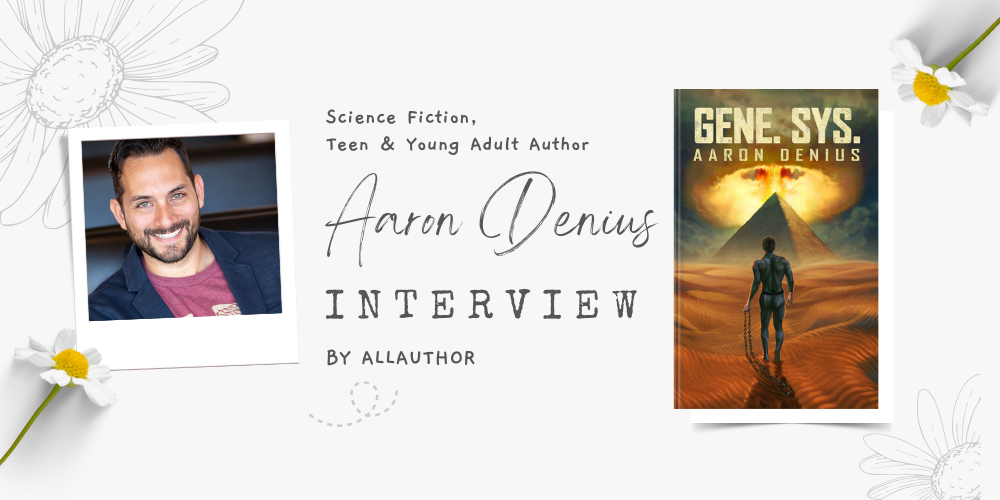 "Author and TV/Film writer, Aaron Denius grew up splitting time between the Washington D.C. area and Venezuela. He moved to Los Angeles to pursue an acting career. He took a screenwriting class, and it was there that he realized he wanted to be the one telling the stories. The details in his novel are so vivid that you feel captivated by it all. His mom is the first person to read the first draft of all his books."
Tell us a little bit about your childhood and where you grew up.

I grew up splitting time between the Washington D.C. area and Venezuela. It was amazing getting exposed to different cultures, but I always felt like an outcast. Teased for being too white in Latin America and picked on for being too Latin in rural Virginia. This made me very introverted, but ultimately allowed me to find my own unique voice.

I can't really say I had too many extraordinary experiences as a teen. I spent a lot of my time in the shadows. I was a follower. Luckily I had a couple of great friends that weren't trouble makers, but it made my teen years quite vanilla. When I finally broke out of my shell and realized that I was a leader, that's when I started to truly live.

What encouraged you to move to Los Angeles to pursue a career in storytelling?

Ironically, I moved to Los Angeles to pursue an acting career. I had a few early successes, but never felt fulfilled. On a whim, I took a screenwriting class, and it was there that I realized I wanted to be the one telling the stories.

What do you miss the most about Venezuela?

I miss the food. It was so decadent. At least that's what I remember. We used to get these things called Cachapas, which were like a sweet corn pancake and you would have this salty cheese with it. It was amazing. I wish I could find a place that served those in Los Angeles.

What was your reaction when you found a writing home on the TNT show "Leverage"?

When I was offered the job on Leverage, I was over the roof. It was a wonderful opportunity, but I was looking forward to learning from writers that had been doing it much longer than I have. I picked up so many tricks and I feel that a lot of my visual storytelling in my books comes from what I learned in that writers' room.

What inspired the plot of the high-speed action book, L.A. Legend?

L.A. Legend was a bit of an anomaly. I wrote the entire thing in 10 days. I didn't outline, I was just possessed by the story. I had to get it down as fast as possible to make sure that I didn't forget anything about it. I think it all just started from the idea of, "what if you got into your car and found $20 million in your back seat".

Have you planned all the books in the Gene. Sys. series?

Before I started the first book, I had the original trilogy planned out in my head. I'm sure I have a sheet of paper with it somewhere. But I don't like to put constraints on my stories when I write. Characters develop as you write them. This character development is what actually led me to write the second book of the series "80". Originally that character was supposed to die in the first book, but some beta readers of the first part of "Gene. Sys." loved the character so much that it made me revisit the character's path. I saw that there was still so much more story to tell. This has actually changed what will happen in the next book(which is the 2nd book of the original trilogy).

How many hours in a day do you write? Have you ever pulled an all-nighter writing?

I am a binge writer. I can go weeks without writing and then one day I'll write for 10 hours straight. I've tried to be more consistent with my writing hours, but it just doesn't work for me. That's not to say that I'm not doing other work to benefit my writing such as marketing, reading, etc. As for pulling all-nighters; I do it all the time. It's part of my bingeing.

When in life did you take a step that was contradictory to the opinion of many others, and what was its result?

I take contradictory steps all the time. When I broke out of my shell in my mid 20's, I worked on getting to a point where the opinions of others didn't affect me negatively. I welcome criticism and learn from it. Memories are made when you step out of your comfort zone, and I like to do that often. More times than not, the results make me happy.

Who is the first person to read the first draft of your books?

Always my mom. She's honest with her critiques. I also see it as my gift to her for allowing me to pursue whatever career I wanted.

The names I choose usually come from one of two places. I either honor someone in my life or I will look for a word in a different language that means what I want the character's main trait to be.

Having written and directed multiple festival films, how would you describe your experience so far?

The directing part of films is a blast. It's such a different experience to most anything in life. It's still storytelling, but you learn alot about how different tools can convey emotions. Lighting, the way the camera moves, among other things are such powerful tools to get your audience to connect. I do miss directing from time to time, and I'm sure I will do it again. The best part about filmmaking though is the collaborative nature of the storytelling. Of course the writer creates the originally story and dialogue, but those are just the bones. The director gives it muscle, lighting and sound gives it the skin. The actors give it the soul.

What interesting thing did you read today?

I just finished "Anxious People" by Fredrik Backman. It's a book that shot up to my top 10 of all time. I highly recommend it. It's full of wit and wisdom.

I just finished a small satirical book that will be released in early October called "tHIs Book Will Make You Anxious". It's just a fun little book filled with short stories and other triggers to phobias and anxieties. Next on my to do list is a stand alone grounded fantasy a la Forrest Gump, Benjamin Button. Then in early 2022, I will start on the next book in the "Gene. Sys." series. That's as far as I plan. I don't like planned years ahead because I would rather be surprised than disappointed.

Have brimming questions to ask author Aaron Denius? Ask whatever you like, but keep it appropriate.
** Please note that unanswered questions will not appear on the page. Refrain from posting promotional messages.

The author, a good book and you! Contact Aaron Denius here.
** Please refrain from spamming and don’t bombard the author with promotional mails/messages. Your IP/Email address may be blocked if found doing so.