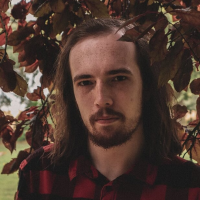 This is what I've always dreamed of, that I would be an author. For as long as I can remember I've been telling stories, odd tales which over time evolved into grander connected narratives. This in turn led me to do work experience at Igloo Publishing House and get a degree in English & Creative Writing, meanwhile also working for just over three years as a tutor of Maths and Science, such pursuits also being of great interest of mine, even if I don't desire a career in their respective fields. I've also enjoyed bringing stories to life by means of amateur performing arts, both scripted and improvised, both the works of others and my own.

At around the age of ten there was a moment where I, looking over the many scraps of paper upon which were written the chapter titles of my various planned stories, realised that with a little tweaking every idea I currently had could conceivably take place within the same continuity. Soon a timeline was drawn, people and enemies were made recurring, and thus The Ragnarök Chronicles were born, albeit not in the exact form the series is in today.

Since then, as my writing style evolved and the stories became more refined, this project, which is planned to consist of fifty-five books in total, has been my consistent goal. Each sub-series, defined by the year in the titles, can be read in isolation, yet when experienced together will form a greater saga spanning time, space and beyond. When it came to then incorporating a mythic side into the tale, taking inspiration from a plethora of mythologies (but per the series name primarily Norse), everything continued to naturally fall into place. There was just one thing though: where to actually begin? With none of the existing entries standing out as functioning as a grand introduction, a new instalment was instead devised. There would be these five figures, these Brethren Lords, these beings who could operate within a single moment or entirely outside of it. But what would they want? Well, that would be a Mancynn...

Going forward, my work is going to be doubled-down on the novel front (save maybe for some elusive other opportunities down the line). I hope you'll enjoy what's to come as much as I will.

Have brimming questions to ask author Dominic Hodgson? Ask the author whatever you like, but keep in the appropriate zone.
** Please note, unanswered questions will not appear on the page and refrain from posting promotional messages.

The author, a good book and you. Contact Dominic Hodgson here.
** No Spamming: Spam is an irritant to regular users or the authors. Please note that bombarding promotional mails/messages is strictly prohibited. Your IP address may be blocked if found doing so.