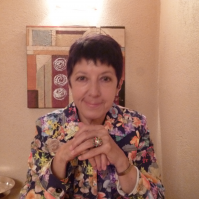 I grew up in England but now live in France, not too far from Paris, in a village on the edge of a forest. Our house contains more books than I will ever have time to read, besides many old favourites from my childhood. The children’s books that I have written are the sort of books that I liked reading as a child, and I hope children nowadays are not so very different.

Birds and animals have always been part of my life and they keep cropping up in what I write. Ebony and Spica tells the true story of a blackbird and a starling, both of whom became members of the family. A cat plays an important role in the novel A Paris Haunting, while Candlepower features a character who mysteriously attracts birds. For children, Tobias and the Demon is an adventure story told by a dog. In Flora and the Wolf, a girl suddenly finds that she can understand what birds and animals are saying. As for The Story of an Ordinary Lion, the idea of adapting this old legend came to me during a trip to Venice, and I am particularly fond of the main character, Leo, the small lion. I believe this last is a story for young and old, not only for children.

My novels could be classified as contemporary fiction with a paranormal twist. The unexplained has always intrigued me. I am currently working on a sequel to Candlepower.

My latest novel, Woman in Blue and White, takes place partly in Paris and partly in Greece. Bizarre experiences haunt the central character, and she must discover what they mean if she is ever to find happiness. 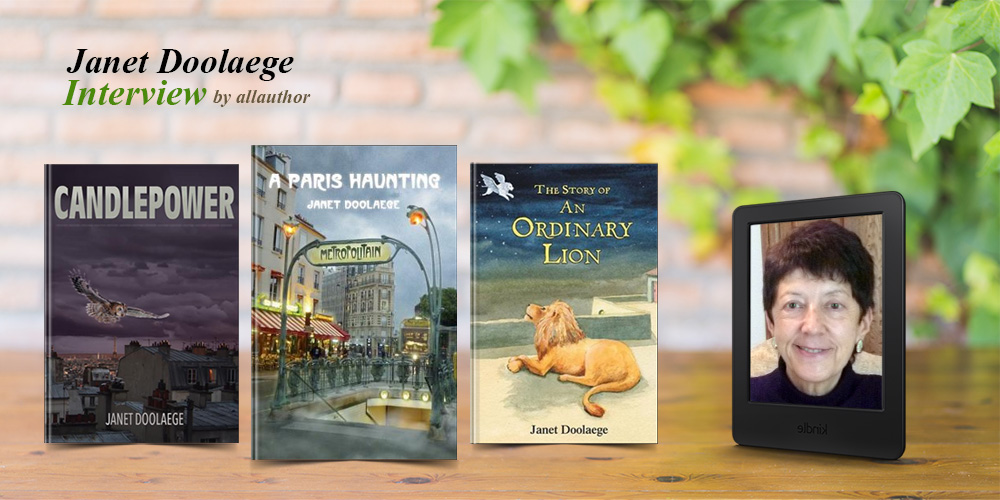 "She grew up in England, on the south coast, in the days when children could buy “penny chews” which were popular children’s snacks at that time. Now Janet is living in France and she has also spent quite some time in Paris where she worked as a translator. Birds and animals have always been part of her life and they keep cropping up in what she writes. Her house contains more books than she will ever have time to read, besides many old favorites from her childhood. She has her own personal style of writing as every writer does. But like all other authors, some good reviews boost her up on days without inspiration."
Tell us a little about growing up in England. What are some popular children's snacks in England that you won't find anywhere else in the world?

I grew up in England, on the south coast, in the days when children could buy “penny chews”. These were popular children’s snacks that were like small squares of fruit-flavoured toffee, wrapped in paper. I am sure they disappeared long ago. As L.P. Hartley said, “the past is a foreign country”.

Why did you move to Paris? How does life in Paris differ from life in England?

France has been my home for many years, a number of them spent in Paris, where I worked as a translator. Of course, life in a big city was very different from my schooldays in a small English town. I soon grew used to travelling on the crowded métro every day and buying fruit and vegetables in the street markets. Little cinemas in backstreets showed classic old films, while major exhibitions of painting were held in stately museums such as the Grand Palais. Something interesting was always going on, and it felt glamorous to be living there. However, Paris is a city, with constant noise, traffic and pollution, and I missed the countryside, birds and animals.

Did you ever have pets growing up? What about now?

When I was growing up in a house with a garden, I had a dog, a liver-and- white Springer spaniel called Bob, but because in Paris I lived in a flat, I didn’t think it would be fair to keep a dog. Now I am married to Jean-Luc, and we have moved to a house some 50 miles south of the city, near the forest of Rambouillet. Over the years we have adopted a dog, several cats and, of course, birds, not to mention the wild birds and the hedgehogs that we feed in the garden.

What do you think makes your writing unique?

I don’t think my writing is unique! I suppose I have my own personal style, as every writer does.

How did you come up with the idea for "A Paris Haunting"? What do you think gives this book such a magnetic appeal?

Ghosts and unexplained phenomena have always fascinated me. I am convinced that life is actually much richer and stranger than it seems in our humdrum everyday reality. I wanted to write a ghost story, and since I was familiar with the Paris métro, I felt able to describe the atmosphere convincingly in A Paris Haunting. I think people like to read about weird phenomena taking place in very real and recognizable places, and I’m also sure that in this book many readers care about the cat.

What do you like most about writing children's books?

When writing a children’s book, I remember all the books that I myself loved as a child. Books from my childhood are like old and treasured friends, and I will never willingly part with them. When I open one from my very early years, in my mind I can hear my mother’s voice reading to me. It’s so important to read to children.

What is the legend or story behind your book "The Story of an Ordinary Lion"? Who designed the amazing cover for this book?

The legend behind The Story of an Ordinary Lion is a medieval one, but I believe I’m the only writer who has told it from the lion’s point of view. The idea came to me on a trip to Venice, where there are plenty of classical paintings of Saint Jerome with his lion, not to mention the winged lion of Saint Mark displayed everywhere. My friend Alain designed the attractive cover for this book. I’m grateful to my books’ illustrators, Alain, Paolo and Jean, and to my friend Marianne, who does the layout of the text.

Why did you choose to set the story "Tobias and the Demon" in ancient Mesopotamia? What is the hardest part about trying to write from the perspective of animals?

The story Tobias and the Demon is set in ancient Mesopotamia because that is where it allegedly took place, according to the Apocrypha. I have added details from my own imagination, and again it is told from an animal’s point of view. It wasn’t difficult for me to write from the dog’s perspective, having grown up with a dog. I think Tag is realistic in many ways, even if a dog could not literally tell a story. However, neither could a horse, yet Black Beauty continues to be popular, doesn’t it? I think it’s normal to feel empathy with animals because we ourselves are animals. We are all part of nature. Alain has designed another fine cover for the paperback edition, and drawn pen-and- ink illustrations, too.

How did you first meet "Ebony and Spica"? What made you decide to finally write a book about them?

I was still living in Paris when Ebony, the blackbird, appeared on the scene. As I relate in Ebony and Spica, I rescued him from a cat when he was very young, and after that he was so tame that I couldn’t safely release him. Spica, the starling, had fallen out of a high nest when my husband found him and brought him home, and he, too became a house-bird, perching on my shoulder without any fear. Ebony lived to the ripe old age of 16, and Spica reached 14. These are great ages for relatively small birds, and they were such personalities that I felt they deserved their own biographies

Tell a little about your latest book "Woman in Blue and White". In what ways do you relate to the main character, Zoe?

Let me say straight away that Zoe, in Woman in Blue and White, is not me. Luckily I have been spared most of her experiences, and I don’t think I have any psychic gifts. I have been on holiday to the beautiful Greek islands, however, and I believe in social justice and equality between the sexes. I have tried to weave some important issues (violence against women, homophobia, addiction) into what is mainly a gripping story with a touch of the supernatural.

Are you working on (or thinking of working on) anything new at the moment? If so, is it a suspense or a children's story?

I have started writing a sequel to Candlepower, but some difficult times at home in the past couple of years have caused me to put it aside for a while. I’m hoping very much to continue and complete it.

What is the most heartwarming message you've received from a fan?

The most heartwarming message I ever receive from a fan is, “I couldn’t put it down”. This must be what every writer wants to hear.

During the days when you're feeling down and uninspired, what is something that always manages to pep you up again?

On days without inspiration, a good review is definitely something that peps me up and encourages me to go on writing. I think all writers need readers to react to their work and give them feedback, and especially to recommend their books to other people.