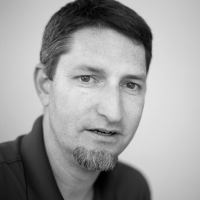 R.A. McCandless has been a writer both professionally and creatively for nearly two decades. He was born under a wandering star that led him to a degree in Communication and English with a focus on creative writing. He is the author of the steampunk The Clockwork Detective urban fantasy series Tears of Heaven, Hell Becomes Her, and Company of the Damned, short stories "And Into A Watery Grave" in In Shambles, "Grenadiers and Dragon's Fire" in Gears Gadgets and Steam, "Through the Sting of Fairy Smoke" in Nine Heroes: Heroic Fantasy anthology, and "He Who Tells the Tale" and "Holes Full of Dark" in Holes: An Indie Author Anthology.


He continues to research and write historical and genre fiction, battle sprinklers, and play with his three boys.

RobRoy McCandless 1 year ago
Early on, Jodi Perkins sets the tone for “Chasing Echoes” as Topaz—Taz for short—starts to lay things out, “It all starts because of a rat.” With relatable characters that will have you laughing, awing, and rooting all the way to the end, Perkins has set the bar high for both young adult and urban fantasy books.

Perkins’ story is the youthful misadventures of Stryder Black, bully and emotionally disgruntled teenage boy, and Topaz Aevos, the semi-average girl with some pretty interesting powers. They’ve known each other most of their lives, but they haven’t really known each other—being more or less aware of the other, but not involved.

Of course, following the “rat incident” things start to take a turn for the weird. Both Taz and Stryder carry around a lot of baggage, not little of it self-inflicted. Perkins adds several layers for all of her characters as strange events start to take place around town, including a very tragic shooting. But when Stryder finds himself “cursed,” and Taz inadvertently joins the curse, they’ll have to work together before they run out of time.

Perkins creates a very believable world with fine attention to detail. The pacing is a little slow in parts, but this musical read is hard to put down. The struggles and obstacles that face Stryder and Taz are emotional, passionate, and well told. I don’t want to spoil anything, but Perkins was able to build to one of my all-time favorite story tropes in such a way that I never saw it coming, and I’m still in awe of the mastery.

In “Chasing Echoes”, Jodi Perkins debuts impressive skill in storytelling built around two interesting and very real characters. Readers will get to see some fascinating depth, as the plot builds to a very satisfying and surprising conclusion.

RobRoy McCandless 1 year ago
BLACK LILIES, the sequel to Jodi Perkin’s excellent CHASING ECHOES, continues with everything that made the first installment so excellent. While it can be read as a standalone, readers will not be disappointed to follow the story (so far) from start to finish.

Perkin’s story this time is still in Taz’s world, but follows Aviva, who gets to travel around in time, when the ghost of a boy from the 1800s, Kade Oaks, starts to “haunt” her. Aviva dives head long into the ghost’s history, believing that if she can solve his murder, she can free him—and hopefully herself.

Perkins has crafted an immersive world of believable characters and fascinating stories. Never one to pull punches, the plot is wonderfully layered, and just complicated enough. Is Aviva headed for a trap? Will she figure out the mystery? Can she save her sisters or even herself? It’s all so delicious, readers will want to keep turning the pages to find out.

In BLACK LILIES, Jodi Perkins has advanced her craft and continued to shine as a force in the urban fantasy genre. With very read, believable characters, and a stunning plot that will leave readers gasping for air and desperate for more.

RobRoy McCandless
JAMES P. BLAYLOCK said: “This is my kind of book: a wonderful, fully realized, utterly plausible steampunk world with a dynamite plot, great characters, and the best dirigibles this side of anywhere.”

Constable Aubrey Hartmann left the Imperial battlefields with a pocketful of medals a clockwork leg and a fearsome reputation. She must survive centaurs thugs and a monster to find a killer and stop a war.

Have brimming questions to ask author RobRoy McCandless? Ask the author whatever you like, but keep in the appropriate zone.
** Please note, unanswered questions will not appear on the page and refrain from posting promotional messages.

The author, a good book and you. Contact RobRoy McCandless here.
** No Spamming: Spam is an irritant to regular users or the authors. Please note that bombarding promotional mails/messages is strictly prohibited. Your IP address may be blocked if found doing so.