USA Today and Wall Street Journal bestselling author Brighton Walsh spent nearly a decade as a professional photographer before taking her storytelling in a different direction and reconnecting with her first love—writing. When she’s not lost in her own made up worlds, she’s probably either reading or shopping—maybe even both at once. She lives in the Midwest with her real life hero of a husband, her two kids—one taller than her, one not quite yet—and her dog who thinks she’s a queen. Her boy-filled house is the setting for dirty socks galore, frequent dance parties (okay, so it’s mostly her, by herself, while her children look on in horror), and more laughter than she thought possible. 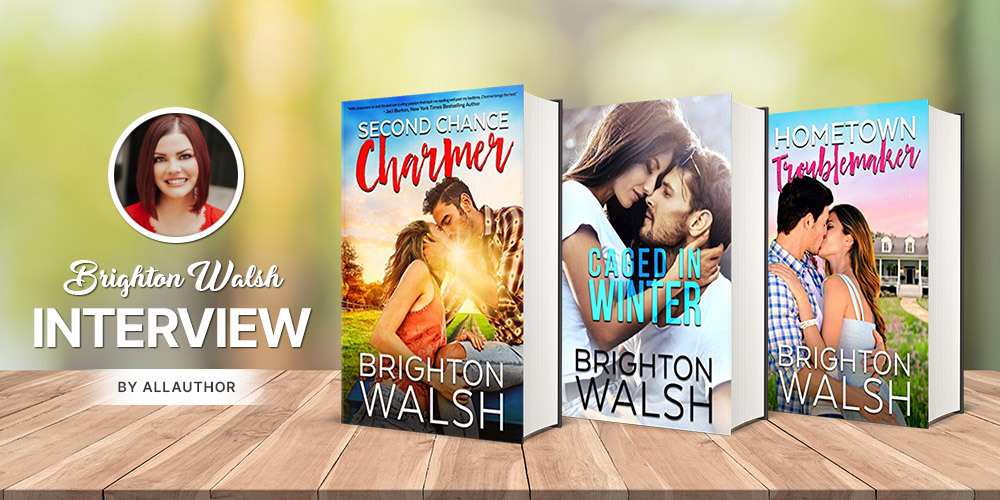 "Brighton Walsh writes in a way that readers fall in love. She used to write poetry a lot when she was younger. In February 2009, she wrote her first fiction—a 10k word "one shot". As a writer, she strives to put together the worst possible couple and make them end up stronger together. Brighton is incredible and her writing never ceases to amaze."
Where were you born and brought up? What is your favorite spot in your hometown?

I lived all over when I was younger—my stepdad worked for the VA, so we moved all over the country. I've lived in ND, WA, PA, SC, TX, SD, WI, and IL. I consider Sioux Falls, SD to be "home," though. It's where I spent most of my adolescence, where I met my husband, where I got married, and where I had my first kid.

Do you remember what your first piece of creative writing was? Tell us more about it.

I used to write poetry a lot when I was younger—maybe late middle school? In high school, I was on the literary magazine and had several poems in that, but I didn't truly get into fiction writing until my late 20s.

What inspired you to take your storytelling in a different direction and reconnecting with your first love—writing?

HA! When I read this, I thought it sounded awfully familiar. LOL Twilight is actually what started this chain reaction. I read it in June of 2008, and by July, I was fully immersed in the fanfiction world. In February 2009, I wrote my first fic—a 10k word "one shot"—and then proceeded to write half a million more words about those characters. Stephenie Meyer and the world and characters she built is 100% responsible for me reconnecting with writing and becoming a published author.

What was your favorite genre and book to read in childhood?

I love love loved horror. When I was younger, it was RL Stine and Christopher Pike. In middle and high school, I graduated to Koontz and King. I got my fill, though, and now only read romance. LOL

I love love. I love all the different ways people can come together. I love the hope in the genre. I love that women's desires (be it professional, personal, or sexual) are at the forefront of the genre. I love how progressive it is. And I absolutely, one hundred percent love that there is a guaranteed happily ever after. There's enough horror in real life. I don't want it in my escapism, too.

How do you deal with a writer’s block?

Recently, I was dealing with a pretty heavy block. While I'd been writing my current series, I'd suffered tragedies with each book. So much so, that I believe my brain associated the series with pain. As such, every time I opened it to start writing, my brain was like, NOPE. When I'd had enough, I reached out to a writing coach who gave me tips specific to my personality and strengths, and pushed through. So, my advice is to reach out to people smarter than you and see if they have a solution.

Which was the most challenging book to write in the Reluctant Hearts series?

What sparked the idea for your book, "Dirty Little Secret"?

That was originally part of an anthology based on 90s songs. Mine was Janet Jackson's If.

Who inspired the character of Madison Frost in "Captive"?

My characters aren't ever really inspired by people—I might base their looks off a model or actor/actress, but who they are at their cores are unique to themselves and have a lot to do with the situation/plot and/or who their counterpart is.

How supportive is your family when it comes to your writing? Do they contribute to your stories in any way?

They're completely supportive and have been since day 1—even when I was writing fanfic! That doesn't mean I don't have to yell at my kids to leave me alone while I'm on deadline, though. LOL They've each contributed in little ways—the kids in my books might have sayings or little quirks that are mirrors of what my own children have done. And all my heroes have a little bit of my husband in them.

Did you plan in advance that Havenbrook is going to be a trilogy?

It's actually planned to be a quartet, but then Pact snuck in there as a fun project. So as of now, it'll be five books. But I have plans for lots more characters in the series (Drew, Nola, and Avery to name a few) if the readers are still hungry for them.

How did you come up with the story of "Hometown Troublemaker"?

I knew in Second Chance Charmer that something wasn't right with Rory's marriage. And then the end came, and Nash was the logical (read: completely illogical) choice to be Rory's pairing. As a writer, I strive to put together the worst possible couple and make them end up stronger together. Turned out okay for them, I think. LOL

Which is the next book you're working on? Is it another romance book?

I actually just signed a contract for a duet that I can't give much information on yet. But I'll be working on that in the coming months. Also on my plate this year is a women's fiction/romance crossover that I'm super excited to start writing. And then, of course, Nat's book for Havenbrook—which readers have already been contacting me, hungry for it. It's coming, I promise!

I've really enjoyed using it! I love the stylized images that get delivered to my email every week—I do wish I were able to change which books get featured, though, so I could rotate through on my social media. I also appreciate the tweets that go out on behalf of me and my books!

Have brimming questions to ask author Brighton Walsh? Ask the author whatever you like, but keep in the appropriate zone.
** Please note, unanswered questions will not appear on the page and refrain from posting promotional messages.

The author, a good book and you. Contact Brighton Walsh here.
** No Spamming: Spam is an irritant to regular users or the authors. Please note that bombarding promotional mails/messages is strictly prohibited. Your IP address may be blocked if found doing so.