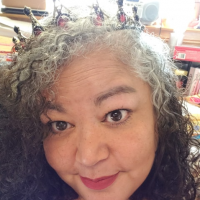 Carolyn Hector knew she was destined to become a writer when she wrote scripts for her Barbies and passed them out to her friends prior to play dates. In 7th grade she wrote--what is now considered fan-fiction--story based on her disappointment of the ending to Streets of Fire. When she later watched Romancing the Stone, she finally knew what she wanted to be when she grew up--a Romance Writer!

She currently lives in Tallahassee, Florida where there's never a dull moment of college sports, politics, and Southern heat... aka... #BookFodder. 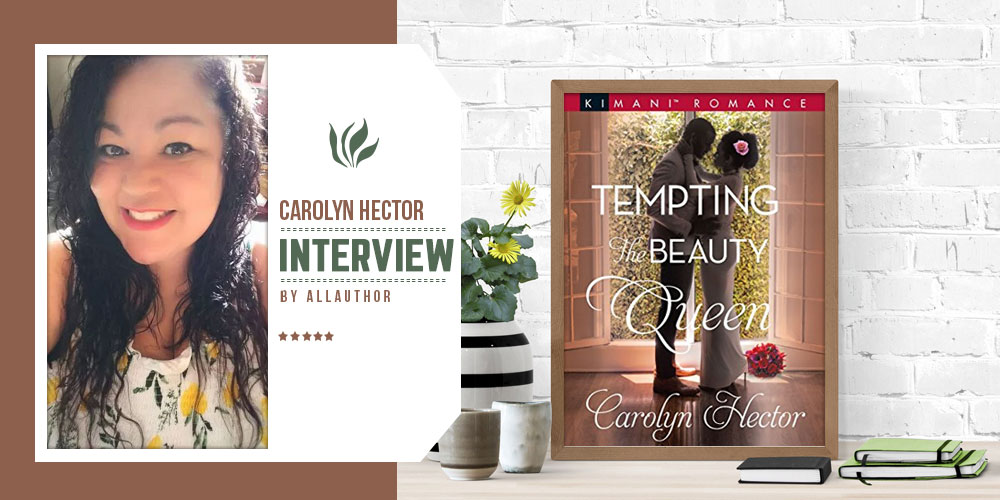 "Author Carolyn Hector was born in West Virginia and has lived in Englewood New Jersey, Hollywood Florida and kind of all over the place. Keeping herself busy with a notebook helped her not feel as insecure. Her friends have been the biggest support for her as an author. When not writing page-turning romance novels, you can find her in the kitchen creating a lot of the cupcakes written about at The Cupcakery in Southwood.
Currently, Carolyn is working on her last two books in the Once Upon a Tiara series for the ending Kimani line."
Did you grow up in Florida as well? How has your childhood influenced you as an author?

I grew up kind of all over the place. I was born in West Virginia and placed up for adoption. I was raised in culturally diverse neighborhood with my family in New York City up until my parents decided to divorce. I've lived in Englewood New Jersey, Hollywood Florida, Tallahassee, Florida, Orlando area in Florida, Carmel Indiana, outside of Atlanta, back to Carmel, and then finally back in Tallahassee for college. Go Rattlers! You could say I was a professional new-kid. Writing kept me sane during the initial new-kid phase where cliques were already established at school long before I arrived. Keeping myself busy with a notebook helped me not feel as insecure.

Can you tell us about the scripts you wrote for your barbies? Do you still have them? What were they about?

The scripts for Barbie are long gone. Too many moves and I believe there was talk about a storage facility and mold. Prior to copy machines, I would out about Barbie and Joe (as in GI Joe). Usually they were reuniting after stint off at war. I recall my friends being upset that I ended the script once on Joe proposing and Barbie leaving for the day to "think about it". And I grabbed my Barbie and went home.

Who has been the biggest support system for you as an author?

My friends have been the biggest support for me. My best friend in Carmel would devour my stories during class. My college best friends in college predicted I'd be a published author. My work family has always given me the encouragement to put my work out there in the universe.

You have written single titles as well as a book series. What are the challenges involved in writing these? Which do you enjoy writing more?

I have a sheepish grin on my face as I answer this. I am an honest to goodness down home series gal. While my single titles may not have a series of tales filled with family members, they do have potential for future stories. Mr. and Mrs. Rossi, I loved writing about Dante and Harley, but there are several members in the bureau who have a story to tell. I love a series; they're like revisiting old friends. A major challenge of writing them is keeping up with the town and who is where and hold old they should be versus how old my editors thinks they should be.

Which couple’s story has been your favourite to write in the Once Upon a Tiara series and why? Which has been the most challenging?

With each book I write, I love them more and more. The challenging story for me was /is Her Mistletoe Bachelor which is coming soon. HMB is about a former beauty queen turned STEM teacher. Instead of a beauty pageant, she and her team are involved in a science pageant. The hardest part of the story was what to put in and what not to put in. I want to showcase the interesting projects women have done in the STEM field but I still had a romance story to tell.

Can you tell us about Waverly Leverve? How did you come up with her name and what is the dilemma that she’s in?

Waverly (truly named after this elegant neighborhood in my home town and wish to one day live) is in a bit of hot water for not controlling response to a popular photographer’s unwanted advances and gave off a few un-queenly-like choice words which were recorded. Her whole life has been planned out from winning a state title, to winning Miss USA and then on to Miss Universe, but her foul mouth gets her into trouble and dethroned of a local title.

If you could make a movie based on any of the Once Upon a Tiara novels, which novel would you choose and why? Which actors would you cast as the characters in this movie?

Oh wow! That’s a hard one. I think I would start off with The Bachelor and the Beauty Queen. While writing Lexi Pendergrass. I’d cast Rita Ora as Lexi and Stephen Bishop as Stephen Reyes. Because my secondary characters and the town are so loveable, you’re going to want to see what’s going to happen to them. I can totally see it! The Once Upon a Tiara Franchise, the DVD-Box set!

Have you ever considered diversifying into other genres? If you had to write a book from another genre, which would you choose to write in?

I have written Romantic Suspense, but I would call it more like Action Adventure Romance. I dream of getting into Historical Romance. I have a few manuscripts in the fire but I want to make sure they’re done right.

At what point did you begin to consider yourself to be an author?

I’m still having a hard time calling myself an author.

What is the most ideal ambience for you to write in?

Anywhere where I’m supposed to be paying attention to something else… a classroom, meetings, football games. For some reason my characters come to life then.

What can we find you doing when you’re not writing page turning romance novels?

You can find me in the kitchen creating a lot of the cupcakes written about at The Cupcakery in Southwood.

How should Streets of Fire have ended, according to you?

Oh Ellen would totally have ended up with Tom. She would show up as soon as Tom and McCoy were going to leave the bar and profess her love to him and leave the celebrity life behind. McCoy would have been the next sheriff or at least the deputy right next to Price. Bird and Baby Doll would go on to be the next music industry’s It Couple.

What advice would you give to new or emerging authors?

I encourage all new and emerging authors to continue writing, keep submitting. Your story is meant to be read by someone out there.

I am working on my last two books in the Once Upon a Tiara series for the ending Kimani line. I’ve started a gulp historical novel. And I’m following my advice to other emerging authors, I continue to submit my work.