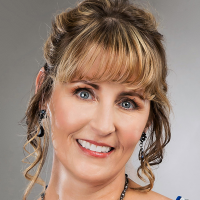 USA Today Bestselling, award-winning author COLLETTE CAMERON® scribbles Scottish and Regency historicals featuring dashing rogues and scoundrels and the intrepid damsels who reform them. Blessed with an over-active and witty muse that won’t stop whispering new romantic romps in her ear, she’s lived in Oregon her entire life, though she dreams of living in Scotland part-time. A self-confessed Cadbury chocoholic, you'll always find a dash of inspiration and a pinch of humor in her sweet-to-spicy timeless romances®. 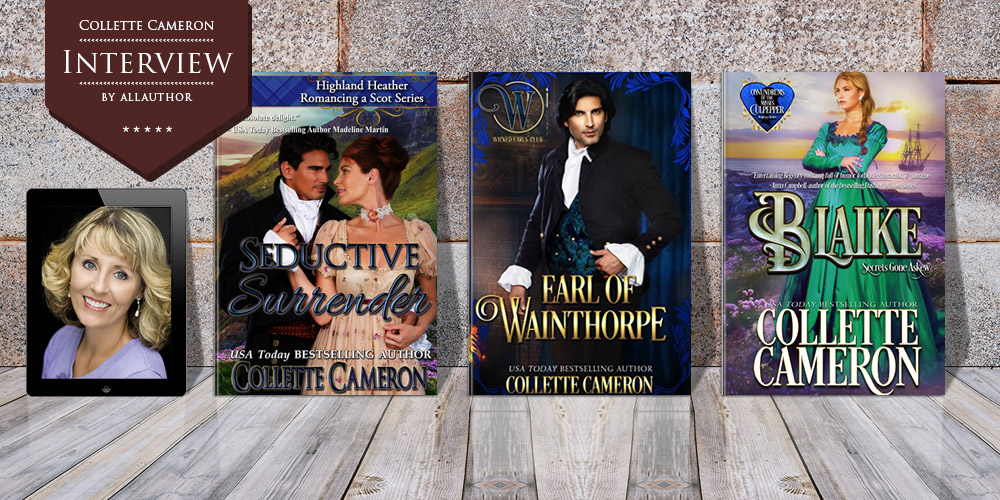 "Author Collette Cameron never thought she would write fiction and is the USA TODAY bestselling author today. An avid gardener, Collette enjoys hiking, trips to the beach, baking, and reading.
Beginning to write with her first published book, Highlander’s Hope in February 2011, Collette knew right then that she had found her calling.
Callotte is an animal lover and you can find evidence of it in all her stories where you will find all kinds of animals who she thinks give depth to the story. She wishes to give her readers a place to escape to for a few hours, away from their cares and has a very unique, sensible, and rather humorous way of handling reviews.
Collete has just finished A ROSE FOR A ROGUE, which is part of an anthology, ROGUES TO LOVERS: THE
LEGEND OF THE BLUE ROSE and is working on a number of new books for her readers."

Which was the first award that you won for your writing? How do you feel about the many feathers in your cap that have added on over the years?

My first award? Hmm, it had to be the Celtic Hearts Sneak Peak Contest. The Viscount’s Vow won the historical category and the Grand Prize.

Did you always want to be a writer? What were your career aspirations as a child?

No, I didn’t always want to be a write. Writing came easy for me in academic settings, and in the back of my mind, a notion niggled away that maybe someday I might write a book. But I don’t have boxes under my bed filled with years of writing. I did dabble in a bit of poetry writing as a teen (awful stuff) and I honestly never thought I’d write fiction.

Too much dialogue, I thought. Now look at me.

What else do you enjoy doing apart from writing?

I’m an avid gardener, and my one-acre yard is a certified wildlife habitat too. I also enjoy hiking, trips to the beach (I’m from the Oregon coast) and baking. Oh, and reading of course!

You would like to live in Scotland. Why Scotland? Why not any other place?

I think it must be in my blood. My grandfather was Scottish. His family moved from Scotland to Nova Scotia several generations ago (mid 1700s during the clearings in Scotland). Maybe that’s why I write Highlander and Scottish Regency historical romances too. I had a chance to visit Scotland last summer for two week and fell in love with the country.

Which was the first book you wrote? Did you ever publish it?

HIGHLANDER’S HOPE is the very first book I wrote, and it was also my first published book. Writing it began on a whim. I had a scene floating around in my head that just wouldn’t go away. So one day, suffering from acute empty-nest syndrome and no teaching job for that day, I parked my rear end in front of the computer and starting typing away. That was in February of 2011. I knew immediately I’d found my calling, though up to that point, I would have sworn teaching was.

We find dogs and birds in your romance stories. Do you love animals in your real life? Do you have any pets?

You’ll find all kinds of animal in my stories: dogs, cats, owls, cockatoos, horses, sheep . . . and more. I am an animal lover; I have six dogs and five cats. The cats are all rescues, and one of the dachsies is a rescue from a puppy mill.

I think animals add depth to stories, and how my characters interact with them reveals a lot about that character’s personality.

Plenty of writers write in the genre of historic fiction. What, according to you, sets you apart from them that you became the USA Today Bestselling Author?

Hmm, that’s a hard question. I honestly believe it’s having books that readers want at an appealing price point, as well as a good deal of luck. I’ve had books not make the list that sold more copies that books that did.

While it’s an honor to say I am a USA Today Bestselling Author, making a list is not my reason for writing. Giving my readers a place to escape to for a few hours, away from their cares and stresses, and in some cases illnesses, to bring them a little bit of happiness is what motivates me.

What is your advice to the young writers of the world?

Read! Seriously, read the genre you want to write in and read books about writing craft. Oh, and other than punctuation and basic writing mechanics, remember academic writing is not the same thing as writing for publication.

Out of the many series of books that you have written, which one did you enjoy writing the most?

I’ve loved my Highland Heather Romancing a Scot Series. I really think it’s because I know those characters so well. Some have been on the pages of my books since I started writing. I also liked mixing genres. While the series is definitely historical romance, I like to call the books Scottish Regencies, because at least one character is Scottish, or part of the story takes place in Scotland which is not your typical Regency Era setting.

Conundrums of the Misses Culpepper series had four books. Which one was the most difficult to write? Why?

Four books so far. There’s one more sister who is pestering me to write her tale. I expect to release that book late summer 2018.

The most recent book, BLAIKE: SECRETS GONE ASKEW was the most difficult for a couple of reasons. I switched the setting from Regency England to a ship for most of the novel. That meant I had to learn a lot about ships. I also introduced a naughty talking cockatoo, and in order to make her speech believable, I had to do a ton of research on cockatoos.

Also, when I named the twins Blaike and Blaire in the first story, I didn’t consider how confusing that might be to readers if they were on the pages a lot together as they are in BLAIKE.

What inspired the plot of Conundrums of the Misses Culpepper?

The series is loosely based on my two cousins and my two sisters, though not the characters, by any means. None are like any of us. But the relationships between them was what I was hoping to capture.

Any art is bound to receive both positive and negative responses. How do you deal with negative reviews of your work?

Occasionally, I get a good laugh, and once in a while, a reviewer makes a valid point. After five years of being published, I usually shrug it off and say, “Mushrooms.”

The mushrooms quote started in the early years of my writing, when I compared books to mushrooms, which I loathe. My husband loves them. Neither of us is right or wrong. We simply don’t agree on whether they are delicious enhancements or revolting slimy fungi that taste of dirt.

What is the sweetest fan mail you have ever received?

Oh, there have been several that touched me so much. One in particular was from a charming elderly man whose ill wife is in care facility. When he visits, he reads my books to her.

What is the next book that you are working on?

I just finished A ROSE FOR A ROGUE, which is part of an anthology, ROGUES TO LOVERS: THE LEGEND OF THE BLUE ROSE. I’m writing the next book in my Seductive Scoundrel’s Series and the next in my Heart of a Scot Series before I tackle the last book in my Conundrums of the Misses Culpepper Series; BLAIRE: TRUTHS TORN ASUNDER. I’m going to have a very busy summer!

Have brimming questions to ask author Collette Cameron? Ask the author whatever you like, but keep in the appropriate zone.
** Please note, unanswered questions will not appear on the page and refrain from posting promotional messages.

The author, a good book and you. Contact Collette Cameron here.
** No Spamming: Spam is an irritant to regular users or the authors. Please note that bombarding promotional mails/messages is strictly prohibited. Your IP address may be blocked if found doing so.