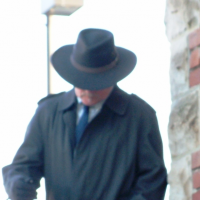 When Don Kesterson left West Virginia in 1974 to attend the University of South Carolina, he swore he would never come back--except, of course, to visit his parents. Four years later, Kesterson was back in West Virginia, much to his chagrin, employed as a petroleum geologist in the oil and gas industry.

After three years, Kesterson started a consulting petroleum geology practice. His career was built around small oil and gas companies developing Devonian shale wells. Throughout his career, Kesterson built a reputation of being a good researcher, particularly finding old, obscure data and being "tight-lipped when it comes to client's secrets." For the next twenty years, Kesterson's career was focused mostly on the Appalachian Basin throughout West Virginia and Ohio. There were numerous occasions when his work led him to other areas of the United States.

Then one day Kesterson's career took an unusual twist; while at his post office, Kesterson bumped into an old family friend, who asked to use his fax machine. This simple act blossomed into a three year relationship with the older gentleman mentoring him in the international business and banking world. As their relationship developed, the mentor introduced him to more of his international contacts and relied on Kesterson more and more for help in analyzing and researching projects. Kesterson's knowledge of this international business grew, and the more he learned, the more fascinated he became. Throughout that relationship, his mentor often told Kesterson, "Don't give up your day job."

One day, the mentor invited Kesterson to his office to show him a gold certificate issued by a world prime bank. A company he was consulting for had asked him to check its validity. While the mentor worked on it from the banking side, Kesterson researched the individual to whom the gold certificate was issued. A little over a year later, the mentor passed away, leaving Kesterson to finish the research and discover what had happened to the gold.

At this point in Kesterson's career, he was working on the two things that make people crazy--crude oil and gold.

As Kesterson's research expanded, it began to open doors into other areas of intrigue and deception. What Kesterson didn't realize was it was opening the door to a potential new career.

After ten years of research, Kesterson had prepared a 1000 page history volume, still unpublished. Once completed, he lined up an editor to prepare the history book for publication. As the editing process moved along, the editor advised him that an exciting novel could be developed from this research and directed Kesterson toward the world of writing fiction.

Not forgetting the advice given so many years ago, Kesterson continued to work his day job. However, he also began plotting and outlining his first novel. Shortly, after finishing his first manuscript, The President's Gold, Kesterson became so caught up in his characters, he had to have more! Within a few months, Kesterson had created an outline to the prequel of his first book, which provided deeper insight and explanation for the setting of the original book. Writing occupied much of his spare time.

Don resides in Chapin, South Carolina, with his wife of over twenty-five years, Jayne, and his only daughter Amber. In his spare time, besides writing, he is also a runner and involved with basketball coaching.

Kesterson has two of three novels out in his Gold series is now available, The President's Gold and Gold of the Spirits. He is currently writing the final novel in that series. Additionally, he has another two of three novel's published on the Vietnam Conflict, Pawns: Magic Bullet and Pawns: Kings In Check. The next novel in this series has just been returned from the professional editor.

Kesterson plans to write at least four additional novels - based upon real history--not the history taught in school.