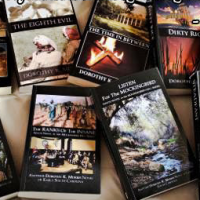 I am a native of Charleston, grew up in the Low Country of South Carolina. Well-traveled, I adopted the West as my home and now reside in Tucson, Arizona. I enjoy genealogy and obtain many of the elements of my characters and plots from my extensive family history. Among my ancestors were many early settlers in the American Colonies. Member of Daughters of The American Revolution. Listed in Marquis Who's Who in America. Received Marquis Who's Who Lifetime Achievement Award for books and other contributions.
All books in the series, which follow in time sequence, are based on actual happenings in South Carolina, with fictional characters leading the action.

Dorothy K Morris has earned excellence awards over time. Here is the glimpse of the accolades clinched by the author. 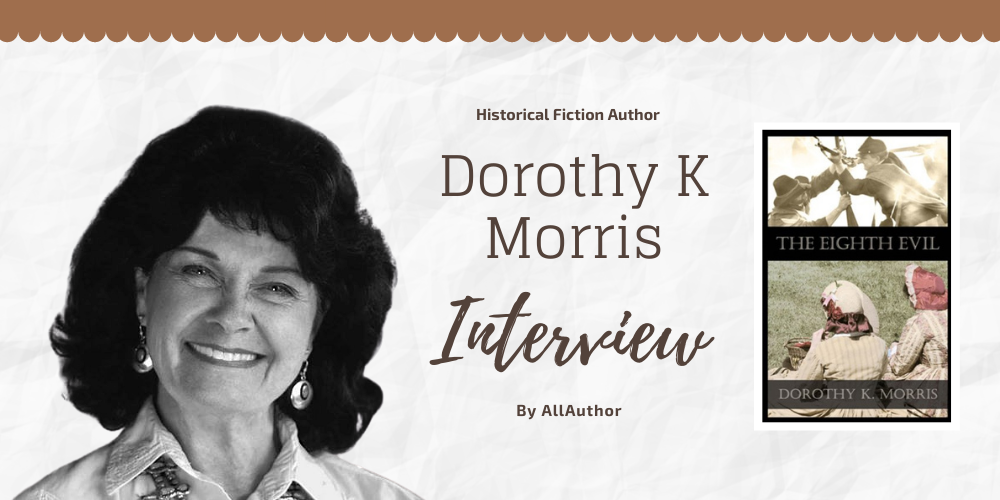 "A gifted author, Dorothy K Morris grew up devouring any book that she could find about animals. She began writing her first story in 1996. The writing style Dorothy has is impeccable. She is a creative story teller and she pays attention to details so much so that the reader gets hooked till the end. With every book, Dorothy has proved that she can create characters and write a book you cannot put down."
What do you miss the most about growing up in the Low Country of South Carolina?

Did you have a nickname when you were growing up? If so, what was it and why were you called that?

What do you enjoy the most about genealogy?

I enjoy the surprising discoveries, knowing where my ancestors lived, how early they came here, finding my mixed ethnicity…White, early colonial Native American, and John Punch, who was the very first 'named' slave in America, and the fun of finding ties to English and French royalty, the Mayflower and the ship that came after it..

At what age did you begin writing your first story?

I began writing my first story in 1996. I was 61 years old. Writing a book was on my bucket list and there were many things I had to accomplish before beginning A book. I intended to write only one.

Why did you choose the historical fiction genre?

I chose historical fiction because I was so close to it. My grandfather was born in 1865, the year the Civil war ended. He and my father and all relatives of those generations spoke of little else when they gathered, but the Damned Yankees and Great General Lee. I was fed that diet while I grew up and I know that when I go back to Charleston, my cousins still speak of it. I am also a history buff. I think we can only explain an era by knowing what happened for a thousand years.

Since how long have you been a member of Daughters of The American Revolution? What is it all about?

First, what is it all about. Daughters of the American Revolution is a very old organization made up of women who can prove…document…that an ancestor either fought in the Revolution or aided and supported it in some recognizable way.

I was accepted Feb 3, 2001, based on my ancestor, Nathan LeGare, of Charleston. He was my first ancestor but since then I have found many more in my genealogy research.

In which year did you get listed in Marquis Who's Who in America?

To be listed in Marquis Who's Who, one must be referred by a standing member. I never knew who recommended me, but I was accepted sometime in the late 1990s. Since that time, I was listed in Who's Who of American Women and Who's Who in the World.

What was your reaction to receiving Marquis Who's Who Lifetime Achievement Award?

I was surprised, of course. I never expected something like that, but I also felt a bit of pride in my accomplishments.

What made you decide to write stories based on actual happenings in South Carolina?

First of all, I chose South Carolina because it is my home. That was the basis of the first four books. After those, when I considered a fifth, I had done enough research to wonder what was behind everything that had happened…what had occurred and why…to make South Carolina the place it had become. I sensed something bigger than just stories of people and began deeper research. What I discovered shocked me and caused me to write books five and continuing, to show how those actual happenings, good and bad, influenced people and history. The history of South Carolina is fascinating and so much of it is not taught in school or is colored with the minds of those who write the books. I wanted to tell it more like it happened. The fifth book took me back to the early time of 1726 after I had read Judith Carney's book, Black Rice. It was an eye opener for sure.

How did you come up with the idea for your book, The Eighth Evil, Number three in the Mockingbird Hill Series?

The Eighth Evil continues the story of Margaret O’Donnell and her companion characters begun in book one, Secret Sins of the Mothers, and continue through this book and the next, book four, The Time in Between. In The Eighth Evil I attempt to show that there are not only seven deadly sins, but another: The Eighth.

Do you like reading more or writing? Who are some of your favorite authors?

I like both equally. I grew up devouring any book that I could find about animals. Then as I grew older, I tried my hand at poetry, but realized that I had no talent for it. In my twenties I discovered the earth sciences, ancient history and then psychology, which occupied my reading most of the time. After reading Carl Jung extensively, and the Sufi tradition, now I focus on Ancient history…very ancient; however, for light reading I have enjoyed Elizabeth George, Raymond Chandler, John Hart and Vince Flynn.

Why did you decide to set your novel "Dirty Rice" in the early 18th Century in the Low-Country of the early South Carolina Colony?

I think I addressed that above, but again, it is because South Carolina was the focus of my series and Charleston my home. Charles Town, as it was called then, was also the wealthiest city in

Colonial America and that wealth was based on growing rice…African Rice…by Africans who were shipped there because they had the knowledge and experience which Europeans did not. Credit was not given to them and I never learned of that in my public education. We were told that they were almost mindless creatures who only did what they were told. That was far from the truth.

Who inspired the dark character, Conger Nash in "The Time In Between"?

Excellent question and you are the first among all the readers to ask about him. I am and have been a student of Carl Jung's Depth Psychology, the study of the Deep Unconscious and the strange entities and Arch Types found there. Conger Nash is both a physical character and a psychological representative of the Negative Shadow in all of us. He is the tempter who tells us that is OK to do certain things. He sits on our shoulder and tells us that everyone else does, so why not us. He leads us astray, to dark paths and then laughs when we choose to take them. He feels powerful before our human weaknesses, but he also has his sense of honor, which he shows in the action with Maggie and Anthony. He keeps his promise. Even the negative shadow is not all evil, even as we are not all good

With book #14, I am bringing this series to a close. I have focused on the lives of two major families, their descendants, those others who join as wives and husbands and children. The title of #14 will be Horizons. There are horizons out there and there are horizons within us. The book is about both and will finish the stories of the Grenville and the Talleigh families and their friends. After that, I have no idea. My Muse will let me know.

Have brimming questions to ask author Dorothy K Morris? Ask the author whatever you like, but keep in the appropriate zone.
** Please note, unanswered questions will not appear on the page and refrain from posting promotional messages.

The author, a good book and you. Contact Dorothy K Morris here.
** No Spamming: Spam is an irritant to regular users or the authors. Please note that bombarding promotional mails/messages is strictly prohibited. Your IP address may be blocked if found doing so.