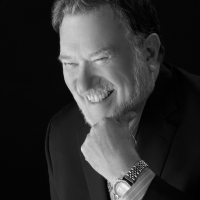 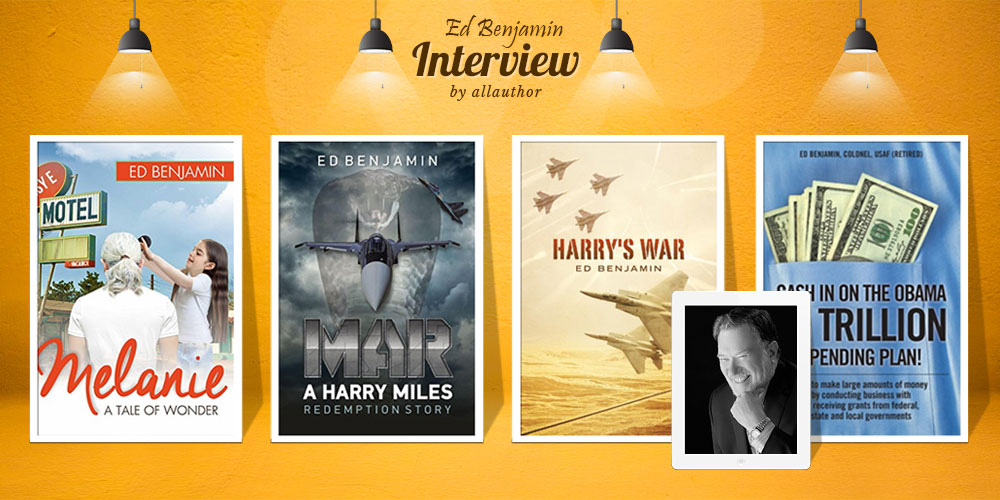 "Raised in Alabama and subsequently, North Carolina, Ed Benjamin was one of those children addicted to reading. Retired from United States Air Force, Benjamin, who once had dreams of becoming a pilot, is a busy technical writer and writes action adventure, suspense, mystery, and unusual short fiction. Finding himself grounded for two months from traveling due to illness, Benjamin decided to write a book for small Mom and Pop businesses, ‘Cash In on the Obama $3 Trillion Spending Plan!’ Working as a proposal manager and writer, the author mostly reads detective mysteries and thriller novels and enjoys series of books with continuing characters. He believes people need to be well rounded and whole individuals, so they can continue to contribute to society.
His motto is to do everything in his power to ensure the client submits a technically compliant proposal."
Tell us about your childhood. Have you always wanted to be an author?

My parents raised me in Alabama and subsequently, North Carolina. I was one of those children addicted to reading. You would find with a book stuck in my nose at all times. I have to admit I did not think of being a writer until I was a junior officer in the United States Air Force. I entered and won some essay contests but did not pursue any fiction. Several years after I retired from the Air Force, I started writing for myself. In 1997, I won a regional writing contest for a short story I wrote, I published my nonfiction book in 2009 and entered the fiction arena in 2012.

I am a busy technical writer and do not get much time to pursue my fiction. But I intend to pursue it more fully now and in the immediate future.

Why did you decide to join the United States Air Force in 1963?

When I graduated from college in 1962, I toyed with the idea of joining an intelligence service; however, I decided to serve my country in the military. The United States Air Force appealed to me the most, and I had dreams of becoming a pilot. The needs of the Air Force came first; however, and I ended up as a supervisor of aircraft maintenance personnel.

In what ways have your experiences in the Air Force influenced your writing?

I spent a lot of time talking to fighter pilots while in the Air Force. They inspired me. They reminded me of the descriptions of Tsar Alexander in the novel, “War and Peace.” In the Air Force, I met many people, not just pilots, who put their country first and dedicated their lives to a greater cause. Those are the kind of people I want to write about the most.

Do you enjoy writing fiction more, or non-fiction? Which is the more challenging genre?

I do enjoy writing fiction more, but both have their good points and not-so-good points.

Fiction is definitely the most challenging.

The blurb of your book Mar: A Harry Miles Redemption Story is so intriguing to read. DO you write these blurbs yourself? How do you decide how much of the story you should reveal in them?

Yes, I write my blurbs myself. I want to ensure my readers know what the book is about rather than try to con them into buying something else. If my sales hurt because I tried to give an honest portrayal of what my stories are about, then that’s the way life flops. In some of my stories (where there is a twist) I may withhold more detail than I would normally.

What inspired you to write the book ‘Cash In on the Obama $3 Trillion Spending Plan!’? What is this book about?

When I retired from the United States Air Force, I started a one person business writing proposals to help companies get business with local, state, and federal governments (mostly the federal government). This business involved some travel. In 2009, I found myself grounded for two months from traveling due to illness. To keep busy, I decided to write a book for small Mom and Pop businesses to inform them how the government procurement system works and how to get business contracts and grants from government. This book is the result.

How did you come up with the character of Harry in Harry's War? Is he based on someone from your own life?

I never knew my paternal grandfather, Harry Miles Benjamin. When my father was around 8 or 9, my grandmother died, and her family looked after him and his sister. Apparently, there was a division in the family and my grandmother’s family would not allow my grandfather to see my father or his sister. They eventually adopted my father and his sister. Legend has it my grandfather was an adventurer and succeeded in obtaining a new life for himself in the wilds of Canada. I felt a calling to name my character after him.

Harry is a composite of many fighter pilots and dedicated people of all ranks who have dedicated their lives to their country’s cause.

What message were you trying to send with the book Harry’s War?

Harry put his whole life into being a fighter pilot. He was the “best of the best.” Then when the Air Force removed him from flying duties, he had nothing to fall back on. I wanted to show while it is good to be the “best of the best;” sometimes life throws you a curve. People need to be well rounded and whole individuals, so they can continue to contribute to society.

How important is reading for an author? What kinds of books do you like to read?

I think it is important for authors to read and see how others express themselves. I mostly read detective mysteries and thriller novels

Is there any author that have greatly influenced you as a writer? Who are some of the people who act as inspirations for you?

Ernest Hemingway has had a profound influence on me. Others include Thomas Wolfe. More recently, the passion in the early works of Norwegian author, Jo Nesbo, has impressed me. I enjoy series of books with continuing characters (Robert Crais, Michael Connelly, Daniel Silva, etc.).

Can you tell us what it means to be a proposal writer and manager?

Have you ever considered leaving your day job to write full-time? Would you consider doing it in the future?

I think about it all the time. I like to eat.

Do you have a secret to success?

I don’t know if I have any secret. I just try and do what is in front of me to the best of my ability. I fall short more often than not. I always fall back on this idea. “No matter what happens, never, never, NEVER quit!”

I have been working on a sequel/revised version of Harry’s War for five years and received a detailed substantive edit from a well-known editor. As a result, I have a lot more work to do on it, but the book will be better as a result.

I am currently working on two full-length novels. One, tentatively entitled “Redemption” expands Harry’s story into a full length book and leads to his life after the Air Force as a private detective.

The other is tentatively entitled “The Mission The Mission: A Story of the Unusual – An Alien Abduction story involving UFOs, Conspiring Government Agencies, and a Romantic Black Comedy Twist.” (Now there’s a mouthful.) Needless to say, it is an alien abduction story where everything goes wrong for the aliens who try and abduct an unusual lady.

I have also started a series of stories entitled “Bulverde Beat,” dealing with a Comal County Sheriff’s Investigator investigations in the Texas Hill country.

I also want to update my book, ‘Cash In on the Obama $3 Trillion Spending Plan!” and re-title it. I will incorporate some changes to government regulations, add some new information, and rearrange the content.