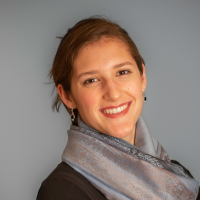 E.G. RADCLIFF IS AN INCURABLE WRITER, lifelong imaginer of worlds, and author of the first-in-series novel THE HIDDEN KING. An insatiable reader and researcher with a penchant for all things Celtic and a love of the mysterious and magical, she brings a knowing touch to her Young Adult fiction. She is based outside of Chicago, Illinois.

Take a moment to join the E.G. Radcliff Readers to learn about frequent GIVEAWAYS for the best titles in the Young Adult Fantasy/Fiction genre: tinyurl.com/EGReaders .

BlueInk Reviews awarded E.G. Radcliff's THE HIDDEN KING a *Notable Book* designation and a starred review saying, “With its unusual characters and compelling story, The Hidden King will be enjoyed by fantasy readers of all ages.”

The International Review of Books crows about THE HIDDEN KING: "The execution of Radcliff’s story sets it apart from others in the genre. It blends LGBT themes, chosen family dynamics, and darker moments (including torture) into an exciting and wholesome tale. Well-written, focused, entertaining. I especially appreciate the author's elegant and evocative writing style.”

WHAT READERS ARE SAYING (average 4.5 stars on Amazon)
★★★★★ A promising debut! [...] I'd recommend this author to people who enjoy books by Holly Black, Leigh Bardugo, and Sarah J. Maas. (A. Murphy, EPL Librarian)
★★★★ The Hidden King is a first-rate read (Amazon reviewer)
★★★★★ Fiery debut and I need more (Amazon Reviewer)
★★★★★ "Oh, what a great story!" (Amazon Reviewer)

Stay connected with E.G. RADCLIFF and stay informed about specials deals, GIVEAWAYS, new releases, and other reader perks—by signing up to receive her exclusive updates: tinyurl.com/EGReaders 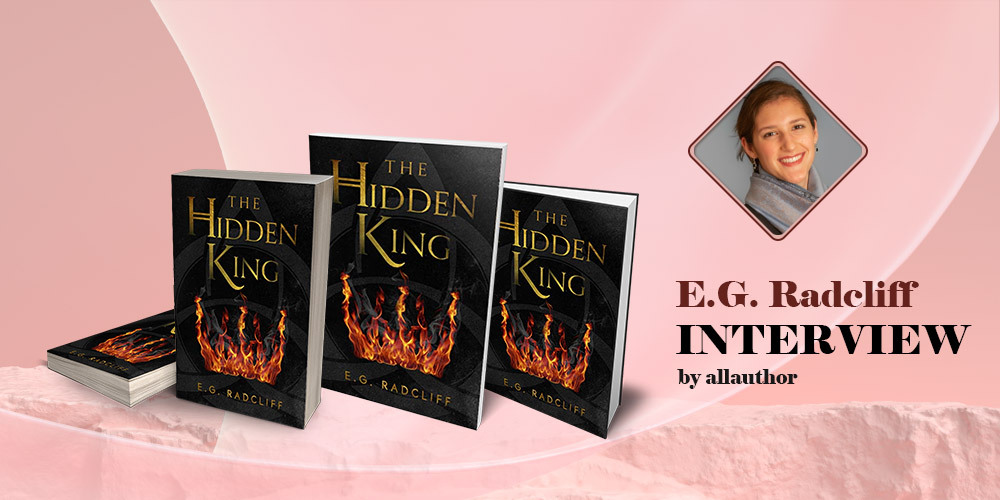 "E.G. Radcliff is a captivating storyteller. She draws you in, leaving the reader with an edge-of-the-seat feeling, demanding to know what's next. Radcliff writes a fantasy world to life with authentic characters and compelling relationships."
Where were you born and where were you raised? What was your childhood like?

I was born in Lincoln Park, Chicago, and grew up in a suburb. As a kid, I was pretty shy with other kids, but I loved talking to adults because I could use my vocabulary--I read the dictionary, I was/am that kid--and they thought it was adorable. In addition to that, I grew up surrounded by a lot of stories from my parents, extended family, and my favorite novels, and since I was naturally quiet, I observed a lot. That really fueled my development as an author.

I’m not actually sure when I decided that I wanted to be an author. I’ve loved storytelling for as long as I can remember; I told tales before I could hold a pen, and when I learned to read and write, it was like learning how to walk. I tripped a lot, but it felt natural. One thing led to another, and I realized that if writing ever became more than a hobby, I could truly have a dream job.

How do you make sure to bring a knowing touch to your Young Adult fiction?

Fiction and fantasy are, by definition, not real… but that doesn’t mean the characters shouldn’t feel real. I do my best to bring a kind of honesty to each person I write, trying to avoid common tropes that can condescend to readers. I also find that writing what I know means writing real-world themes, and in fantasy, such themes often make the narrative more relatable.

What draws you to the genre of teen and young adult? What are some of the challenges involved in writing in this genre?

I personally love teen and YA books--it’s a genre in which authors can tell some really powerful, emotion-driven stories, and even address important themes in a medium that’s generally neither overly heavy nor overly highbrow. One of the major challenges for YA writers is that since YA is not geared toward an adult audience, it’s very hard to get it taken seriously in many ways. Yes, instalove tropes abound in this genre, but the fact is, YA is literature, and it deserves recognition for the depths it explores in a way that’s intended for enjoyment.

How do you think the publishing industry has changed over the years? What is your perspective on self-publishing?

Publishing has become rather notorious for being one of the hardest industries to break into. It’s true that without previous publishing experience, it’s difficult to get published, even in most literary magazines, and it’s my belief that self-publishing is just as legitimate an option as traditional publishing through a publishing house. Usually what makes people wary of an independently-published work is the view that it wasn’t ‘good enough’ to be chosen by a publishing house, but this view is simply inaccurate: The Martian, for instance, was independently published, and it became a bestseller and a movie featuring Matt Damon. The ‘goodness’ of a book has nothing to do with how it was published, because a truly dedicated self-publishing author will ensure their work is well-edited, formatted, and beta-read to achieve the same level of polish and quality as a book which has been accepted by a publishing house. It’s a lot of work, but it is a valid option.

How did you come up with Áed's character in "The Hidden King"? What qualities about him do you adore the most?

Áed’s basic character traits--that is, his appearance, relation to other characters, and a few other aspects--came to me all at once in a dream. His personality, though, evolved throughout the process. I really had to let him show me how to write him. I’d create a scene between, say, Áed and Ninian, and their interaction would create a certain dynamic; there were times when I’d think ‘no, that isn’t right, he wouldn’t say that,’ and I’d realize that Áed’s character was coming out of my subconscious and guiding my hand. I really like his connection to other characters in ‘The Hidden King,’ and I think that’s my favorite aspect of Áed: no matter how strong he is, he really, really needs other people in order to be whole. Most of his motivation stems from his desire to protect or avenge someone else, and that makes him a pretty dangerous person to cross. But he’s not a totally selfless hero either, and that gives him a dash of… dare I say humanity?

Do you ever have writer’s block? How do you overcome it?

Eesh. Sometimes I feel like I have writer’s block more often than not. Honestly, the main cause of my block is disliking my work, so I try to avoid rereading until I have a lot down. In some situations, I find mustering the courage to delete things I’ve written can be very helpful, like freeing up mental shelf space. When I’m actually trying to get words on the page, I like to get a workout in, stay up really late, and wait for my brain to loosen up.

What inspired you to write the series The Coming of Áed?

I had a huge number of stories in my head before I started writing The Hidden King, and one night, they all mixed together in a particularly wild dream. I woke up with the setting and the characters firmly in my head. I couldn’t not write--it was like the opposite of writer’s block, it was writer’s rush--and once I started, I couldn’t go back.

There are so many fantasy writers out there. How do you ensure that your stories are exclusive and not like any other mainstream fantasy novel?

The only way to manage this is to read a lot of other novels. I actively study tropes, and if, when I’m writing, the next plot point seems too obvious, I’ll try to think of other ways the action could flow that could potentially move the story with more power.

The creative process is slippery. Usually, I like to spend a while with the idea in my head; if I get bored of it after a week or so, I know it won’t stand up to the novel-writing process. If, after that time, I’m still excited about it, then I try to identify the overall tone of the piece, and from there, I start playing with a thematically- appropriate first scene. In that first scene, I often switch up the voice of the writing, trying to find one that suits the story best, and then I edit for uniformity later. Once I’m committed, it’s a matter of setting out time to write, and putting myself in environments where I can be inspired; I personally like the library.

Who has been your biggest support system in your journey as a writer?

My mother. She not only read the first draft of ‘The Hidden King’ and encouraged me to go further, but was a huge asset when it came to admin and navigating the technical elements--she was in technology sales before she retired, and I think it shows. Her encouragement has been invaluable. I’m inclined to think that everything I produce is trash until someone I trust tells me otherwise. My mother was always the person who was honest with me.

What are some of your other interests apart from writing? What would you be doing today if you weren’t a writer?

I play water polo as a goalie, and I sing as well. If I weren’t a writer, I think I’d still be pursuing those hobbies on the side, but I’d be doing more to indulge my love of history. I’ve always wanted to travel, so I’d probably be working in a research position that allowed me to move frequently.

Is there any other genre that has enticed you like Fantasy has, that you would consider writing in in the future?

I’ve always loved fiction for the liberty it grants me, and aside from fantasy, I’ve thought often about exploring historical fiction. That would allow me to feed my historical research fascination while still offering the freedom to create as I please.

What advice do you have for new and aspiring authors?

The most important advice I can give is to keep at it. It’s really easy to get discouraged by the publishing scene, but persistence is everything. While you’re persisting, learn. Read excellent fiction, and take notes. Experiment with different styles. Go over your old writing, decide what you’d change, and then see if those changes carry through to your later works. Give your writing to your friends, and people you know will be honest with you. Most importantly, enjoy your writing. It’s an art, and if it doesn’t give you pleasure, there’s no reason to do it.

Have brimming questions to ask author E.G. Radcliff? Ask the author whatever you like, but keep in the appropriate zone.
** Please note, unanswered questions will not appear on the page and refrain from posting promotional messages.

The author, a good book and you. Contact E.G. Radcliff here.
** No Spamming: Spam is an irritant to regular users or the authors. Please note that bombarding promotional mails/messages is strictly prohibited. Your IP address may be blocked if found doing so.