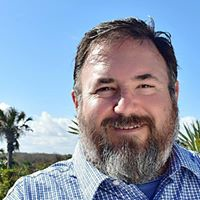 Although he worships San Francisco, he lives at the beach on another coast.

Born on a windy day in November of 1966, he was elected President of his high school Spanish Club in the spring of 1983.

After moving across these United States like a rapid-fire pinball, he currently makes his home in a hurricane-proof motel with superior water pressure that was built in 1947.

While he hasn't met any dolphins personally, that invitation is always open. 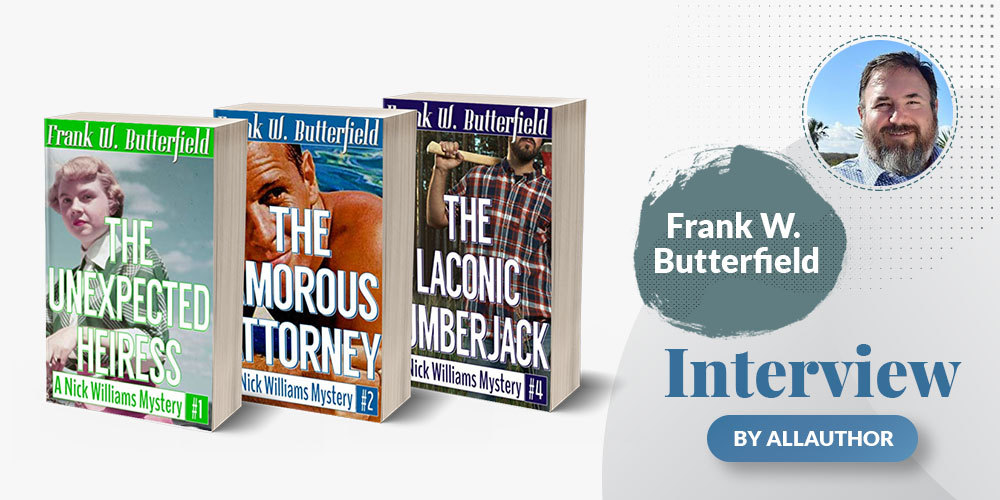 "Frank W. Butterfield was born and raised in Lubbock, Texas, which is in the Texas Panhandle. He has always been fascinated with LGBT history and the fact that so much of it is lost to time. He loves old movies, wise-cracking smart guys with hearts of gold, and writing for fun. He writes for the pleasure of it. And he does take some time off, but not much, because he likes to write.
He only has one goal: write books he wants to read."

What was your childhood like? Where were you raised?

I was born and (mostly) raised in Lubbock, Texas, which is in the Texas Panhandle. My parents divorced when I was young and, after the dust settled, my sister and I grew up with our father. We spent our summers and Christmas vacations going back and forth from Lubbock to either Dallas or my grandmother's house on Caddo Lake in deep East Texas (about a mile from the Louisiana line). Those two parts of the state are vastly different. Lubbock is in the American West and the other two are in the American South. When I was in high school, I was lucky enough to spend six months in Chile as an exchange student. That changed my life in really profound ways.

Did you always want to be an author? When did you first start writing?

When I was 9, I sat down and tried to write a short story and couldn't figure out how to do it. After that, I pretty much assumed I didn't know how to write. My English teachers tended to agree with me... I tried my hand at a gay murder mystery in the mid 90s (when I was 30) and made the mistake of asking a fan of Jane Austen to read the first couple of chapters. That didn't go too well, so I dropped that story. But when I was 49, I started writing fanfic and posting it online. As a result, I realized I did know how to write and, after practicing with that and getting about 300K words under my belt, so to speak, I decided to write a book I could sell. That was in May of 2016 and that's when I wrote THE UNEXPECTED HEIRESS.

What made you decide to write historical mystery and LGBT novels? How do you maintain a balance between the two?

I've always been fascinated with LGBT history and the fact that so much of it is lost to time. I've also always been intrigued with the personal stories of the 20th century and how so much happened so fast and changed so dramatically in just a hundred years. For me, there is no balance to be struck since the historical stories I write are about LGBT characters and they sit in the center of the narration and drive everything.

How did you come up with the plot of the "A Nick Williams Mystery" series? Did you know it was a series when you started writing it?

For many years, I'd been telling myself the story of Perry Mason, but where Perry and Paul Drake (his private investigator) were a couple and Della Street and Gertie (the receptionist) were having an on-again, off-again relationship. In many ways, THE UNEXPECTED HEIRESS is a version of that story, but once I sat down and let Nick (the narrator of the Nick Williams Mysteries) talk to me and tell me his story, it became something unique and, for me, wholly unexpected. And, to be clear, I don't plot anything. Nick tells me his stories and I write them down.

As for whether it would be a series... I knew that after I finished the second book, THE AMOROUS ATTORNEY. I woke up one morning with an idea for a short story that takes place in June of 2008. That's significant because that would have been the first time Nick and Carter would have been able to legally marry in California. That was when I realized their marriage is the end of their story (this isn't a spoiler since I've talked and written about this extensively).

That said, I just wrapped up the MYSTERY series with THE LOVELESS LAWYER, Book 32. It takes place in January and February of 1967. The next Nick and Carter book will be THE CROOKED COLONEL. That starts on New Year's Day of 1970 and begins a new series: THE ADVENTURES OF NICK AND CARTER. There will still be mysteries, but calling them ADVENTURES gives me the flexibility to write a wider variety of stories about their lives together.

Simply put: they show up and tell me who they are and how to describe them and what happens. I don't plot, don't plan, and don't develop. I just follow what I see and hear in my mind. That allows me to write fast since I can let the story tell itself.

Who was your favourite character to write in "The Romantical Adventures of Whit & Eddie" series and why?

In this series, I pretty much like everyone. In the current work-in-progress, I've even begun to respect and somewhat admire Whit's mother, who's not easy to like. The narrator of the series is Eddie. And, in most ways, he's me. His back story is mine with some details altered to protect the privacy of some folks. I like writing as him. It's therapeutic and I've learned a lot about myself in the process.

But I really like writing about Whit. His life is so very different than mine. He was raised in a strict religious environment and was a star athlete from an early age. Writing about him allows me to get some insight into things I know very little about. For example, I know next to nothing about American football (other than the team names and cities). Fortunately, my brother and a couple of readers know a great deal about the subject. They helped me build a fictional team, a roster of players, and Whit's personal story. I've learned a lot, but realize I've barely scratched the surface.

How did you start writing the Daytona Beach series? What spawned the idea?

I started writing this series because I wanted to write some legal procedurals. Not every book will be set around a trial, but most will (I suspect). I also wanted to write about the place I now call home and that very much feels like home. Florida in the 1940s was a very different place than it is now—much more so than, say, San Francisco. And that fact has already produced some juicy tales.

I only have one goal: write books I want to read.

If you could spend a day with any one of your characters, who would it be? What would you do?

This is a tough question. It's like asking who is your favorite child. However, if I have to come up with just one, I'd choose Carter. And, since he seems to remember EVERYTHING, I'd ask him to take me on a walking tour of San Francisco to show me his favorite places and all the interesting stories connected to each spot.

Between Mario Ossler and Dr. Robert Jenkins in your book, "Their Own Hidden Island", which do you think you'd get along with the best and why?

This is a great question since Eddie (of Whit & Eddie) is friends with both of them. And, since Eddie is me, I know the answer. I'd get along with Mario better but that's only because he's funny and goofy and kind of wild (both in how he acts and how he looks). Bob is a scientist and likes to deal with life logically. I know I would like them both and tell them that. But I would secretly like Mario better.

Do you write to escape or to focus more? Can an author ever have "vacation" weeks or months where they don't write or is it something you just always want to do?

I write for the pleasure of it. And I do take some time off, but not much, because I like to write. Actually... I like to read. Writing provides me a really deep dive into a story that reading can't do. That's the truth of it.

Where do you see yourself as an author in 10 years time? Are there any goals you hope to accomplish by then?

I really do live one day at a time (as much as I can). I expect to be writing in 10 years, however, and to have a bookcase or two full of published books along with a stack of DVDs containing their adapted films.

I really like the sense of community at AllAuthor and how the team really goes out of their way to support both authors and readers. I wish you all the best success because I think you've got something really special going on here. Thanks for your work and support!

Have brimming questions to ask author Frank W. Butterfield? Ask the author whatever you like, but keep in the appropriate zone.
** Please note, unanswered questions will not appear on the page and refrain from posting promotional messages.

The author, a good book and you. Contact Frank W. Butterfield here.
** No Spamming: Spam is an irritant to regular users or the authors. Please note that bombarding promotional mails/messages is strictly prohibited. Your IP address may be blocked if found doing so.