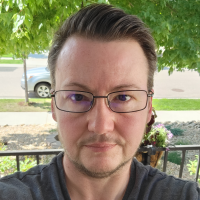 Grayson Bell has had a love affair with the written word since the age of four. He taught himself how to read with the help of a phonics segment on Sesame Street, and he’s been devouring books ever since.

Sharing his home in Colorado with his dogs, Grayson also enjoys whipping up something creative in the kitchen or escaping into the world of video games. He is an out and proud gay, transgender man.

"Grayson's hometown is Chicago. He writes something every week. Whether it’s adding to a novel he is working on, writing a blog post, or contributing an article to an online news site. He cooks several times each week. He enjoys the creative process of handcrafting a good meal. When he sits down to start a new novel, he remains focused and tries to write at least 2,000 words each day until it’s complete. He has a dark erotic romance he plans to write next."
What is the name of your hometown and what do you think is the best thing about the place?

My hometown is Chicago. The best thing about growing up there were all the museums, and the fact they always had one day each week that were free so everyone had access to the knowledge stored in them.

Travel abroad. Every time I leave the US and visit somewhere new, I learn more about this wonderful planet we live on.

How often do you write? What inspires you to write?

I write something every week. Whether it’s adding to a novel I’m working on, writing a blog post, or contributing an article to an online news site, I’m always writing something. Ideas for stories and articles come to me more frequently than I have time to write them all down. I guess what inspires me the most is life and living.

What books inspired you to become an author?

It wasn’t a book, it was a video game, that inspired me to start writing. The game is called Dragon Age and it has a very rich storyline, and I was inspired to add to that storyline with the first story I wrote. Eventually I began to have story ideas completely unrelated to the video game and that’s where my first novel came from.

[Note: I removed the ‘genderqueer’ part of your question. I am a genderqueer person, but I write gay romances, not genderqueer romances].

What was the biggest challenge of writing your first LGBT book?

Writing it was easy. The story flowed out of me as I wrote it, and I finished it in about 5-6 weeks. The biggest challenge has been to market and promote it.

How did you come up with the title of your book, "Coffee-to-Go"?

The title “Coffee-to-Go” refers to the nickname that the barista, Leo, gave to his romantic interest, a male nurse named Andy. Andy always hurries into the coffee shop and merely orders a simple cup of coffee, to-go. That stood out to Leo since everyone else always ordered fancier coffees, like cappuccinos, espressos, and lattes.

In what ways do you relate to Scott in "Mark My Soul?" Who is your favorite character in this book?

In “Mark My Soul” I love both main characters equally. I would say I relate to Scott a little more just because he’s also a novelist, who came from a single-parent household.

What are some under-represented themes or people you feature in your books and why do you think it is important?

Did you take inspiration for the character of Leo in ‘Coffee-to-Go’ from a real-life character?

No, Leo is completely fictionalized and not based on any real person I know. I always come up with the plot of my stories first, and then I write characters that fit the plot.

How do you decide when a story is over and how to end it? What're the most times you've changed the ending of a book because you weren't satisfied?

Once all the main plot points in the story have been resolved, that’s when I end them. I tend to prefer happy endings, so I always leave my characters on a happy note. Honestly, I’ve never rewritten an ending yet. I’m usually satisfied with how my stories end. I may revise the wording, but the overall intent of the ending remains the same.

When I sit down to start a new novel, I remain focused and try to write at least 2,000 words each day until it’s complete. My first drafts take me about 4-6 weeks, and then I move toward the editing process. When I’m editing, my work is more sporadic. I begin by running the manuscript through a grammar software tool, followed by a complete read-through to fix any issues I find. Then I recruit beta readers, anywhere from 5-8, to read and give feedback on the pacing, plot holes, and other issues there may be with the narrative. I repeat this process at least 5 or 6 times to make sure the manuscript is as close to flawless as possible before I begin prepping for publication.

How often do you cook? Have you ever thought of creating a character of a chef in any of your books?

I cook several times each week. I enjoy the creative process of handcrafting a good meal. I have not yet been inspired to include a chef in my novels, but if that profession lends itself to the plot, I would be open to having such a character.

What was the best advice you've ever received related to writing?

Don’t stop. Keep writing. Don’t go back and edit while working on the first draft. Just get the story out. Editing is for after the first draft is complete. That advice is what helps me complete my first drafts so quickly.

Grayson Bell is a thinker and a doer. These are the quotes by famous personalities the author resonates with.

True love doesn't happen right away; it's an ever-growing process. It develops after you've gone through many ups and downs, when you've suffered together, cried together, laughed together.
Ricardo MontalbanLove 352

But love is blind, and lovers cannot see What petty follies they themselves commit
William ShakespeareLove 273

Every heart sings a song, incomplete, until another heart whispers back. Those who wish to sing always find a song. At the touch of a lover, everyone becomes a poet.
PlatoLove 232

Pure love is a willingness to give without a thought of receiving anything in return.
Peace PilgrimLove 181

Have brimming questions to ask author Grayson Bell? Ask whatever you like, but keep it appropriate.
** Please note that unanswered questions will not appear on the page. Refrain from posting promotional messages.

The author, a good book and you! Contact Grayson Bell here.
** Please refrain from spamming and don’t bombard the author with promotional mails/messages. Your IP/Email address may be blocked if found doing so.