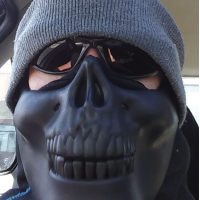 Jason Laureno is an irrepressible smartass and a terminal fuckup, but he means well. He lives in one of the worst neighborhoods in Gresham, Oregon and he absolutely loves it. He bites his fingernails, picks his nose, and farts a lot. He is enjoying a few beers while he writes this, as he feels pretentious writing about himself in the third person. 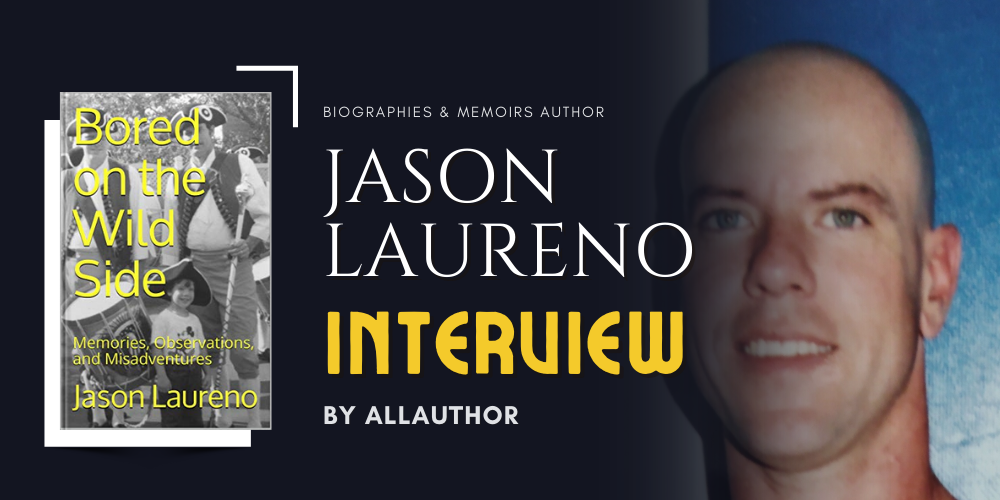 "Author, cannabis breeder, recovering musician, Jason Laureno is very grateful to have been a kid during the 1980s. He has always enjoyed writing, even when it was in the form of mandatory school assignments. His debut novel, Bored on the Wild Side is being appreciated for its originality and strong voice. Jason really knows how to paint a picture with words."
Which is your favorite childhood memory?

I have so many fond childhood memories that it’s all but impossible to narrow it down to a single one. Generally speaking, I’m very grateful to have been a kid during the 1980s. We generally felt safe, we had a tremendous amount of freedom and independence, and we were encouraged to explore and engage the world around us rather than merely watch it on a television screen.

One of the first stories I recall reading was a personalized book my mom had made for me. It was a generic story about a day spent at a circus and zoo, but I was the main character in it and it contained the names of many of my relatives, pets, friends and such that I encountered as the plot progressed. The impact was that it made me feel special and worthwhile as the focus of a story- which grew into my love of biography and memoir.

I’ve had a number of people compliment and encourage my writing through the years, but my fiance Jamey has been the most supportive in both word and deed. It’s one thing for someone to say, “You should write.”. It’s quite another to hear “You need to write, and I’m going to leave you alone so you can- even though I’ll miss you and I’d rather be talking to and having fun with you.”.

I’ve been writing as far back as I can remember. I’ve always enjoyed it, even when it was in the form of mandatory school assignments. A story that sticks in my mind was hardly my first, but it’s a fond memory. I had a short story due for a Humanities class I was taking, and I couldn’t get any kind of flow going. We were supposed to describe a grand ball we were attending during the Rococo period in France. I didn’t identify with the wealth and opulence of the period and I was stuck. About a half hour before I had to leave to turn in the project, I had an idea to write from the perspective of a poor outsider looking in at the ball with contempt. Ultimately, my character robbed and murdered a drunken aristocrat who had wandered outside to get some air. My character then explained that this act was the springboard for his revolutionary activities- which culminated in his taking a lead role in the French Revolution decades later.

When writing novels, is it better to have daily time-spent-writing goals or words-written goals?

I don’t have any real experience writing novels, as I’m just beginning the outline for my first. I’ll get back to you when I’m done.

What challenges did you face while writing the memoir, "Bored on the Wild Side: Memories, Observations, and Misadventures"?

Being a memoir, Bored on the Wild Side was literally a lifetime in the making. My biggest hurdles in writing it were finding my writing “voice”, establishing a writing discipline / schedule, and making the decision of where to actually end the story.

When writing the memoir, how did you remember specific details of past events and scenes?

As I mentioned in the intro of “Bored”, I have the mixed blessing of a very long and vivid memory. Outside of the writing and editing of certain stories, the details surrounding the personal tales came rather effortlessly. So far as newsworthy and historical events that I used to give context to my own story, I simply put my choices on a rudimentary timeline and then refined and fleshed out the ones I felt were most relevant to the work as a whole.

I’m a huge movie buff. That being said, I’ve all too often been disappointed with the film versions of truly great books. I know it’s an enormous task, but so few screenwriters and directors are capable (or permitted) of doing justice to some of the books they take on. Sometimes I’ll read the book before seeing the film, sometimes vice versa. But if I like either version, I’ll often check out its counterpart to compare the two.

It really wouldn’t be fair of me to try to narrow it down to a single compliment. I’ve received many humbling reviews and far more praise than my ego deserves. I always love hearing that a reader can relate to my story or that it touched them, but at the end of the day I’m just grateful when someone takes the time to read what I’ve put down. I appreciate even the worst and most critical reviews I receive. No book (or writer) is universally loved and I always try to find something positive to take away from even the most harsh evaluations.

I’d have to say honesty and vulnerability were among the most important facets of this particular project. Nobody likes to be the bad guy in their own story. But good or bad, if you’re attempting to make excuses or obscure facts, people will see through it and treat it with the disdain a lie deserves. And you’ll know in your heart that you cheated yourself as well.

What is a helpful advice for people who are interested in writing their memoirs?

Get started. I’ve met so many people who would either hem and haw about a project or talk about the best books they have in their heads- but never actually write them. Books don’t write themselves. It’s hard work that requires discipline, but the elation and satisfaction of being able to look back at a completed project is all but impossible to explain to someone who has yet to experience it.

What's something on your bucket list that you think is unique?

That’s actually a tough question as I don’t really have a bucket list. I just try to live with the knowledge of my mortality swimming around in my head and do the things / have the adventures / chase the dreams as they come up. Death sneaks up on us all. Better to live like you’re always being stalked by the reaper than to risk facing a list of “I never got tos”. At least that’s my opinion.

How important do you think it is to spend time with yourself?

I cherish every moment I get to be alone. Always have. Granted, I deeply enjoy great company when the opportunity to keep it arises, but I relish the time when I can be by myself and simply think, learn, and reflect...about anything and everything.

I have started working on my first novel, but I’m just scratching the surface and I honestly have no idea when I’ll complete it.

When did you first come across the AllAuthor website and what were your expectations coming in? What are your thoughts now?

I’m a DIY guy. Once I had a book completed, my next question was “Now how do I let people know it exists?”. That’s how I crossed paths with AllAuthor. I didn’t know what to expect, but I can say I’ve definitely enjoyed the partnership. The tools, the tweets, the camaraderie established with other authors, it’s all been great!

Have brimming questions to ask author Jason Laureno? Ask the author whatever you like, but keep in the appropriate zone.
** Please note, unanswered questions will not appear on the page and refrain from posting promotional messages.

The author, a good book and you! Contact Jason Laureno here.
** Please refrain from spamming and don't bombard the author with promotional mails/messages. Your IP/Email address may be blocked if found doing so.