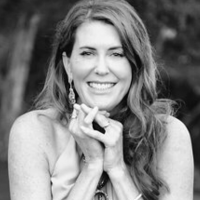 A native New Yorker and captivating storyteller with a flair for embellishment, Jennifer Irwin currently resides in Los Angeles with two cats, a dog, and her boyfriend. After earning her BA in Cinema from Denison University, she worked in advertising and marketing raised three boys, and ultimately became a certified Pilates instructor. While she has written screenplays and short stories since her college days, A Dress the Color of the Sky is her first novel. 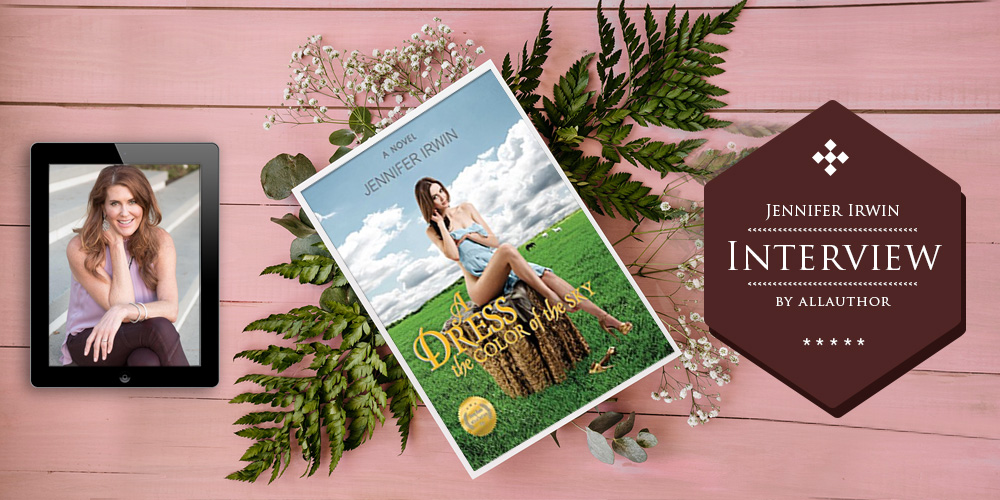 "Raised by a single mother, author Jennifer Irwin, spent most of her childhood in Cold Spring Harbor, a small town on the North Shore of Long Island. She began writing again after her divorce because it made her feel better. Jennifer writes contemporary fiction and is fascinated by humans - what drives their desire and behavior. A mother to three boys, she counts her lucky stars to be their mom. She advises young people to keep their options open because a person can have multiple fulfilling careers during their lifetime. Speaking of women’s fiction, Jennifer believes the genre has taken a fabulous turn lately and it is a great time to be a writer of women’s fiction. Irwin is a huge fan of romantic comedies and would love to write one some day but is a total scared cat when it comes to horror. She would also enjoy writing a Nora Ephron type memoir."
Give us an insight into your childhood and growing up. How has your life inspired you to become a writer?

I was raised by a single mother who had a dynamic career. She worked her way up the corporate ladder and I witnessed the many trials and tribulations associated with her climb to the top. There wasn’t a lot of supervision growing up so I learned to fend for myself. There is a part of me that believes everything happens for a reason and I suppose much of the hardship I experienced as a child was beneficial to me being a strong storyteller. The painful parts of my life are what inspired me to become a writer.

You grew up in New York and currently live in LA. How have these cities shaped your life?

There is a lot of east coast in me even though I reside in Los Angeles. All three of my sons wanted to attend east coast colleges so I suppose I rubbed off on them as well. Most of my childhood was spent on the North Shore of Long Island in a small town called Cold Spring Harbor. It was there that I learned about society, trust funds, manners and social graces. There was a clear line between the “haves” and the “have nots” and we were in the latter group. My years living and working in New York City were exciting and wild but I knew that if I stayed I wouldn’t survive. The city can eat you alive. I still dream of keeping an apartment in New York and visiting often. Los Angeles was the most difficult place for me to make friends and to feel like it was home. Although it seems to have a laid back vibe, people keep to themselves and are more closed. I will never forget the first time I landed in Los Angeles and actually felt like I was home. It took many years before that happened! Los Angeles humbled me a great deal, perhaps because I got divorced here and had so much pain and heartache.

A Dress the Color of the Sky is your first novel. Tell us more about the novel. What was your inspiration to write it?

A Dress the Color of the Sky was a story that I had in my head for many years. It is the universal story of wanting to be seen and heard, healing from trauma, and the journey to find self-love. When I went through my divorce, I started writing again because it made me feel better. There was a fascination inside me about happiness, love, and how some people find their soulmates and some don’t. I became curious as to the connection between childhood experiences and who we become as adults. Then when certain men were coming forward as sex addicts I wondered if a woman could be one too. While I was teaching private Pilates I got to know many types of women and realized that we are all very similar in our wants and needs. When Fifty Shades of Gray was released, I was astounded by the impact the book had on women, marriages, sex lives, and I wanted to dig deeper into the subject.

Are your characters inspired by real-life people? Who is your inspiration for Prudence's character?

The first few rough drafts had characters that were loosely based on people I knew. As the story developed, the characters took a life all their own and no longer resembled anyone I knew. The inspiration behind Prudence was to create a relatable yet flawed female protagonist. A woman who does bad things but is a good person. She’s a character you root for and empathize with. Prudence Aldrich is my alter ego I suppose.

Prudence's character shows how her past affects her present choices. Do you relate to that idea? Are there any real-life instances that have inspired parts of the novel?

The foundation of who we are as people is partly because of our childhood experiences, good and bad. This book explores how not dealing with painful experiences, healing and moving forward can affect many aspects of ones adult life. I completely relate to the concept that my childhood deeply molded who I am as a person. There are many real life instances that inspired parts of the novel. My mother’s man-picker was broken beyond repair and therefore, I lacked strong male role models. The parts of the book in which Prudence faces her father’s addiction issues are very close to home for me.

You have been writing screenplays and short stories since college days. How different is it to write for visual media from the print?

When you are writing for television and film you have the opportunity to take into consideration the actors physical movements and expressions which can only be done through descriptions in a book. The other factor is that film is extremely expensive so the scene must be critical to moving the story forward. I do think that my years working on the production side of advertising helped me understand how to tell a succinct story in a short timeframe.

When you wrote screenplays in college, what was your favorite genre to write?

I’ve always been the contemporary fiction storyteller, even when I was a film major in college. I’m fascinated by humans - what drives desire and behavior. My favorite books are contemporary fiction and memoirs. I am a total scaredy cat when it comes to horror. I’m the girl screaming under the seat with her head in her hands.

Your career includes working in advertising and marketing. How different do you find writing from such jobs?

My experience in advertising was on the production side but we worked with the copy writers and creative team to put the story on film. Television commercials are meant to generate product sales whereas a book is more about creating emotion.

You have a diverse career graph- from a degree in Cinema to working in advertising and marketing, and now a Pilates instructor, and also a writer. What was your original career plan?

A few years into my advertising career, the production departments were shrinking in favor of outsourcing. I started working in industrial theatre producing shows for corporations that are gathering in cities like Vegas for their annual sales meetings. It was like putting on a broadway show and striking it in a matter of days. Those were crazy times and not conducive to being a mother. By the time my third son was born, I made the decision to be home but still wanted to work. Pilates was a viable option because I could work when my kids were in school and home when they weren’t. I also loved the idea of helping my clients feel better about their bodies. It was a win win. To answer your question, even the best laid plans change so my advise to the young people out there - you can have multiple fulfilling careers during your lifetime. Keep your options open.

What is it like being a mother to three sons? How supportive and understanding are your kids of you following your passion to write?

There’s a special place in heaven for the mothers of all boys! There’s an upside to being the only girl in the house, whenever we played Star Wars I was always Princess Leia. Seriously though, my sons are great guys and I count my lucky stars to be their mom. All three of my kids have been extremely supportive of my writing journey and they are very proud of my accomplishments. They have learned that it’s never too late to chase your dreams.

You have three pets- 2 cats and a dog, and you are a mom to three kids. How do you manage your time and attention between work and children and pets?

I’m skilled at multi-tasking. I get a lot done but nothing I do is perfect. Everything is just a little off and I’ve learned that it’s okay.

What is your take on Women's fiction and how women characters are portrayed in contemporary novels?

I think that Women’s fiction has taken a fabulous turn lately. The flawed female protagonist, whether likable or unlikable, is something we’re seeing more of in Contemporary fiction. Of course, 50 Shades of Gray, was a game changer for many women. I absolutely loved how that book changed lives and recharged lots of relationships. It was also encouraging to see a self published book go viral. Reese Witherspoon is embracing the flawed female protagonist through her popular book club, and the fact that she is snatching up the film rights to so many books is also quite exciting.

How do you think the portrayal of women in novels has changed over the years?

Women are portrayed as thinkers, leaders, and far less helpless than they had been in the past. These days, the more flawed your protagonist, the better. It’s a great time to be a writer of Women’s fiction!

Are there any other genres that you would like to write on in the future? Which ones would they be?

I’m a huge fan of romantic comedies and would love to write one. I also would consider a Nora Ephron type memoir in which I mixed humor with every day life and growing old.