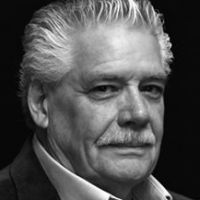 John was born in February of 1941 and raised in Flint, Michigan.
John served in the United States Marines, was a Califonia Peace officer, and owned and operated a security business.
In 2003, John retired to Las Vegas, Nevada. He began writing using his experiences and knowledge of the military and police. John has written three novels, "White Crow," "The Crow Legacy," “The House of Crow,” and a novella, "With Deadly Purpose." All titles are now available as Audiobooks.

John W Wood has earned excellence awards over time. Here is the glimpse of the accolades clinched by the author. 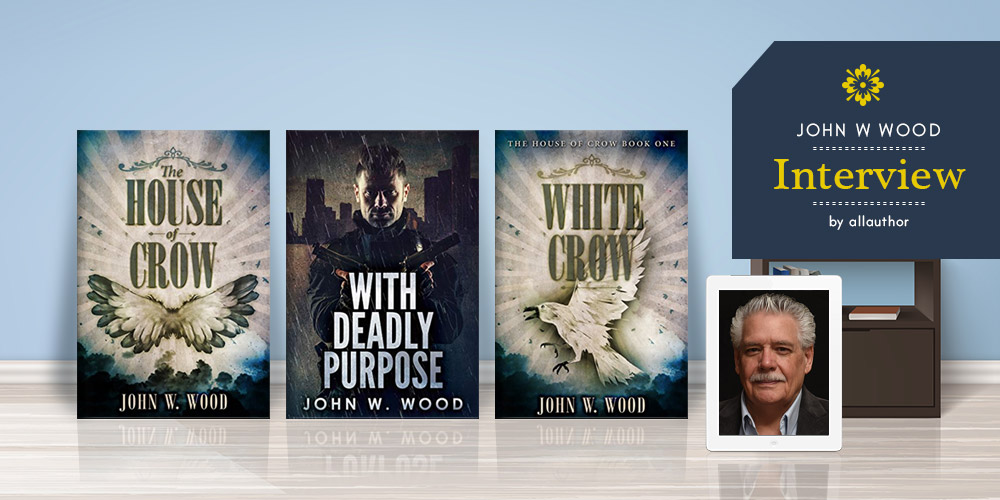 "Born in February of 1941 and raised in Flint, Michigan, John W Wood began writing using his experiences and knowledge of the military and police. The workings of law enforcement and the many types of crimes and the people who commit them have been a significant influence on his writing. His work as a bodyguard and as a businessman has been an influence also. He has written a prequel called White Crow, which is now a Five-Star read on Amazon.
He is currently writing another House of Crow book call The Crow Legacy."

Do you love music? As a child, did you ever think of becoming a musician or a radio disk jockey like your father?

I do enjoy music, Sundays as a kid was often a music day. It could be an opera or a musical. Everyone would be doing their own thing in the house while listening. I tried both radio and playing the saxophone, but it just didn’t hold my interest.

Have you read any of your mother's short stories? Do you think she inspired you to become a writer?

Yes, my mother wrote from the heart, using her experiences in life. She won many contests and was often published in magazines. She did the first editing on my book. I got upset. “Do you want to write,” she asked. “Then you’d better toughen up!” Yes, she was an influence.

“I learned a great deal about the character of men. The unwritten rules and etiquette of hunting and shooting. I was afforded the opportunity to meet the editors of many of the sports and hunting magazines. My working there impacted what I did when I joined the Marines and that I was an expert shot.

How was your experience of becoming an instructor for shooting skeet and trap? What it felt like to come in second as junior state champion?

I and several others were trap boys (setting the clay targets) we were often asked to help shooters who were having an off day. We all became excellent shots. I was seventeen when I shot for the state championship. On my last set of doubles (two clay targets at the same time one high, one low) I missed both and lost by one point. To say I was disappointed would be an understatement. But I learned to stay focused to the end; “It’s not over till it’s over.”

One thing you wish you knew when you started working in heavy construction as a teamster driving the big heavy trucks we often see in mining.

I wish I had known how to operate the trucks! I was green, didn’t have a clue, but I needed the job. A couple of old-timers took pity on me and gave me some instruction. It was scary work, I lost my brakes once, with a full load, my wheel drums were on fire, and I was moving fast. The foreman jumped onto the hood and shouted, “Can you handle it?” I nodded yes, and we both rode her to the bottom of the mountain and got it stopped. Had a long cold drink of water after.

Being involved in a prolonged gunfight with six intruders in a highly restricted area, what motivated you to switch from a federal officer to a writer?

The gunfight was while I was a Marine in Guam. After I got out of the service, I became a police officer and then a Federal officer. I really didn’t like the position of a Federal officer and became a deputy sheriff. It was many years later at the age of sixty-two and retired, that I began writing. I was going through a tough time, and one night I started writing a few lines describing a man on a train. It ended up being my first book, The House of Crow.

How do you think your experience of working in law enforcement in California helps you to write crime fiction and mysteries? What inspired you to write "With Deadly Purpose?"

The workings of law enforcement and the many types of crimes and the people who commit them have been a significant influence on my writing. My work as a bodyguard and as a businessman has been an influence also. I wanted to write about Post Traumatic Stress Disorder, as it has impacted all of our military men and women. I used experiences from just about every aspect of my life to write, With Deadly Purpose.

The security business required you to travel across the United States, Europe, Japan, Korea, and the Middle East. Out of all the places you have been to, where would you like staying for the rest of your life? Why?

I love my country, and this is where I will stay. But Japan was by far my most favorite place to go, and I went there as often as I could. I enjoyed the people and the culture. Their history still fascinates me, and I still have my friends in Japan.

The security business started out with three employees and two patrol vehicles. Are you still in contact with those three employees? How did they react to you becoming an author?

No, I no longer have contact with the original three. I still have an occasional connection with three of my partners in the business, they were surprised at my writing and have been encouraging.

What inspired you to write the series "The House of Crow?" Which book in the series took the longest to write?

It took ten years to write The House of Crow. It was changed many times and was only a conversation piece about someday I’d like to publish it. Then I met Mary Felix who turned my life around and encouraged me to publish. I self-published on Amazon, and to my surprise, people loved the book! I was lucky enough to get a publisher, Creativia, and the book became a bestseller through their promotion. The inspiration for the House of Crow? I was writing a description of a man on a train. The character came alive and began telling me this story, I just put it down on paper.

How did you manage to tell a story that is intriguing and also shares history in all its glory? How much did you research for "The House of Crow"?

I do research as I write. If I need an answer about a place or time in history; I stop and look it up. Invariably it impacts the story and tells me what the characters would or will do. You asked about my mother’s influence earlier; we were looking at a painting one day of a blacksmith in his shop. There was a window behind the blacksmith. She asked, “Interesting isn’t it, all the tools and the horses?” I said yes. “Look at the window and wonder what is outside.” I have been looking out that window ever since.

What inspired the character of Charles Crow? Do you wish to add more books to this series?

I saw that The House of Crow had the potential as a series. W.E. B. Griffin has been a significant influence on my style of writing. I wanted a way to tell the history of the Crow family and at the same time keep it in the present. Charles Crow learns about his family and also realizes who he is and probably why he became a Marine. I have written a prequel called White Crow, which is now a Five-Star read on Amazon. I am currently writing another House of Crow book call The Crow Legacy.

How has been the journey from joining the Marines to becoming an author? What would you advise the young writers?

Read, read, read and then write, write, write. Be observant of what is going on around you, people, conversations, sounds. Be aware when you play how children or adults react. All of these things, life, help make you a writer, but most of all you have to write. It is all wrong in the beginning, that’s why we edit. Like the saying goes, “If you wait for an idea to write, you are not a writer, you are a waiter.”

What are you currently working on? When is your next book releasing?

I’m working on the Crow Legacy, and I hope to have it ready for the publisher in the next few months.

Have brimming questions to ask author John W Wood? Ask the author whatever you like, but keep in the appropriate zone.
** Please note, unanswered questions will not appear on the page and refrain from posting promotional messages.

The author, a good book and you. Contact John W Wood here.
** No Spamming: Spam is an irritant to regular users or the authors. Please note that bombarding promotional mails/messages is strictly prohibited. Your IP address may be blocked if found doing so.