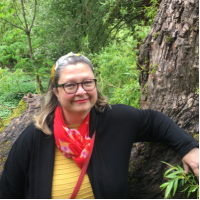 After 27 years in teaching I am now fully focused upon my writing, as an author and poet. With 5 books now published, there isn't much spare time left, but I use what remains to bake, have family days out, walk my dog and share the spotlight with my friends in my local drama group.

My first book ‘Finding My Way’ is a memoir style narrative looking at midlife, motherhood and menopause with humor and honesty. Feedback has been overwhelmingly positive, making connections with many women of a certain age.

I am particularly proud of my historical fiction novella 'Unravelling - A Tale of Strength, Love and Dementia.' This felt like a significant achievement on my part and has received acclaim for its well-drawn characters and beautiful prose.

Primarily though, I am a poet - now with 3 collections to my name - all of them making connections with readers, spreading kindness and understanding, one word at a time...

‘Diary of a Dizzy Peri - Poems and Thoughts on Midlife, Menopause and Mental Health.’ This is my contribution to keeping both the menopause and the mental health conversation going.

‘Click and Connect - A Collection of Hope’ brings together poetry and writings completed over the pandemic year.

'Polaroids and Petals' is my latest collection, with a nostalgic thread running through it. The poems highlight what really matters to us. 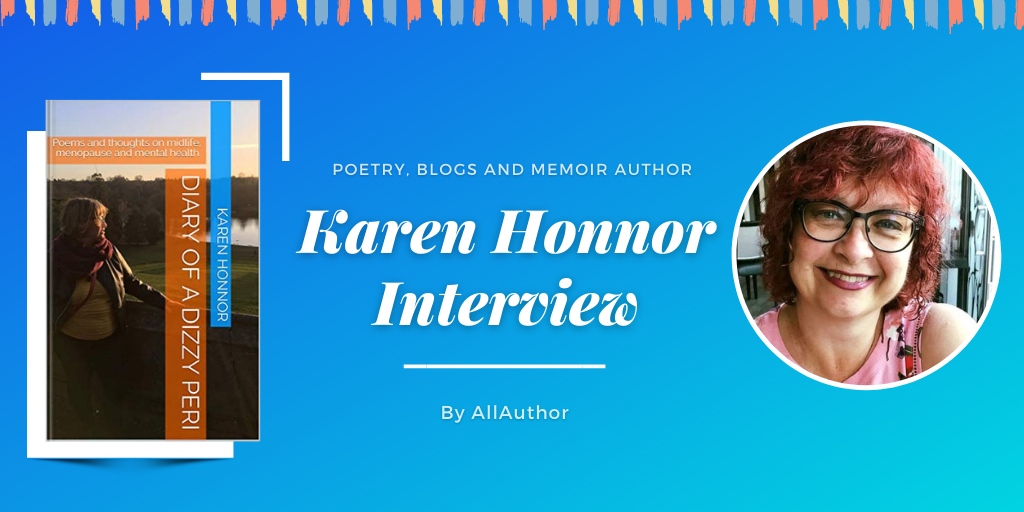 "Author and poet, Karen Honnor has published two books and continues to write scripts and poetry. Writing has been part of her make-up since she can remember. Karen grew from writing poems and scripts for plays at school to continuing both the poetry and script writing alongside her day job. She likes to bake, have family days out and walk her dog."
How did your parents decide on your name?

I think it was just a popular name at the time, there were certainly several other girls named Karen in my High School classes.

What is the one thing that should be taught in school that isn't already?

I don’t think there is one particular subject that should be taught, as such, more that a whole approach to learning should be adopted. Encouraging children to be creative and therefore able to problem-solve and have resilience when a challenge arises, would be of lifelong value. Creative subjects are being systematically trimmed or viewed as an indulgent extra when in reality, those subjects allow the brain to think in a different way to much of the more traditional academic subjects. Considering that we cannot foresee the jobs that our children will be working at when they are grown, creative mind-sets are likely to be the ones best place to face such a future.

What made you decide to take a career break and focus on writing?

Writing has been part of my make-up since I can remember. At school, I enjoyed story writing lessons and later, I began to write poems and scripts for plays. As an adult, alongside my day job teaching in various forms, I continued with both the poetry and script writing but I would always have my dream ready to tell anyone who asked “If I win the lottery, I want to live by the sea and sit in a turreted room and write.”

Teaching is an exhausting job. Rewarding in so many ways, but definitely exhausting. Having worked in various aspects of it for 27 years and the most recent of those years being alongside managing family issues, I decided not to wait for my dream. I closed my classroom door and instead, set up a ‘writing den’ in a space at home with a determination to give it a go and see where my writing might take me.

What are some memoirs, autobiographies, and biographies that everyone should read?

I think it is interesting to read books about people who you find interesting – whether that be because they have something in common with you or because there life is so different from yours that the appeal of discovering that other world is enough of a draw for you to open the front cover. Personally, I find it interesting if there is an historical aspect to the book but every reader would be different.

What challenges did you face while writing your first book ‘Finding My Way’?

As my first book grew organically from my blog posts, it did not look like a book at first. Once I let the idea of forming the separate pieces into a book, my challenge was finding a way to thread it all together. Reviews from readers talk of how brave and honest my account is and therefore how the writing struck a chord with them. I did not see it so much as brave, because once I started to write about my experiences, the act of writing became my therapy. The other challenges were once the initial draft was complete – I had a very steep learning curve in regard to editing, formatting, publishing and promoting the finished article. Even after teaching children about writing for years, I had no idea how much was involved in the whole writing process.

What truths about motherhood need to be said?

It’s hard, there are no right answers, sometimes it feels like all your decisions were the wrong ones to take but there is nothing to compare it with and nothing that can take the precious moments of it away from you. As I say in my first book, you will always ‘wear the Mother Hat' no matter how old your children get and it is indeed a privilege to do so.

What should be considered to publish a successful poetry chapbook?

I suppose that comes down to writing poems that people can connect with on some level. Readers have commented about mine – ‘Diary of a Dizzy Peri’ – that they enjoyed dipping in and out of it, or reading it all in one go but recognising that they want to return to it again to re-read particular favourites. I think there was a clear thread running through the poems to give the chapbook an identified theme, which helps when collating poems for publication.

How do you decide whether you should publish a chapbook or a full poetry collection first?

I researched how many poems would be good for either a chapbook or a collection but also I thought about how they would all hang together. I had more poems, which numerically would have put the book into more of a collection than a chapbook but I felt it then started to lose its definition. Either way, it is important to stand back from it and look at how the poems form together as a whole entity.

How was the idea for your first poetry chapbook ‘Diary of a Dizzy Peri’ born?

I started writing some poems during the Covid Lockdown in March 2020. I found it helped me process my emotions, my feelings of feeling trapped, my need to get out for permitted walks to be close to nature. At the time, I had been unable to get past a writer’s block for my current piece of fiction so I decided to shelve that and to just write anything that came to mind, to pour it all out onto the pages of my notebook. Once I had a few poems, I began to think that my thoughts might help others as I was sure that I would not be alone in my reactions to this strange time. From there, the idea grew to collate my poems and thoughts about mental health, midlife and menopause. The chapbook was the end result.

What would be your tips for starting a conversation about your mental health with your family and friends?

Just start by telling one trusted person that you are not okay. Too often, when people ask how we are, we go to the default answer of saying that we are fine. I found that once I found the confidence to tell one person, it was easier to tell another. Also, once I let on that I was not managing that well, I discovered that my friends were saying similar things. As a family, we have got better at signalling to each other when one of us is struggling and in being able to give each other space when they need it.

Have you become close friends with people you have met while walking the dog?

Mostly I walk our dog, ‘Gizmo’ with my husband. We take a break out of our day to walk her in local parks or a bit further at weekends. It is definitely true that we have both chatted more to people we meet, whilst walking the dog. People use their dogs as ice breakers.

What was your worst baking disaster?

I guess the lemon cake that didn’t bake! It wasn’t really my fault as I discovered that the oven had stopped working part-way through the cooking process so had to swap the sponge to the top oven, but it never quite recovered from the experience and was quite a flat end result.

When was the last time you genuinely applauded something at your local drama group?

I started running the drama group in 2005. In that time, I worked with a whole bunch or people from different backgrounds, with different experiences and levels of ability. Between us we had many times when we would applaud each other’s performances, laugh together when things went a little wrong and support each other through rehearsals, backstage preparations and all that goes into making a show ready. The single most inspiring thing that I have missed since Covid pressed the pause button on the group, is the camaraderie of the friendship of us all. Much more than a performance to be applauded, is the connection we all had with each other whilst involved with the group, working together to be ready for curtain up.

I am currently in the first edit stages of my first fiction piece, which I am very excited about. The story is told from the perspective of a main character who has dementia and tells of how she is desperately attempting to hold onto her memories whilst she can still share them with her granddaughter. It carries central messages of family, love and acceptance.

I joined AllAuthor in June and have enjoyed connecting with readers and other authors through the process.

Have brimming questions to ask author Karen Honnor? Ask whatever you like, but keep it appropriate.
** Please note that unanswered questions will not appear on the page. Refrain from posting promotional messages.

The author, a good book and you! Contact Karen Honnor here.
** Please refrain from spamming and don’t bombard the author with promotional mails/messages. Your IP/Email address may be blocked if found doing so.