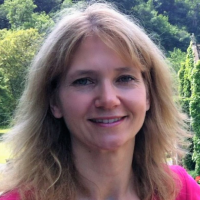 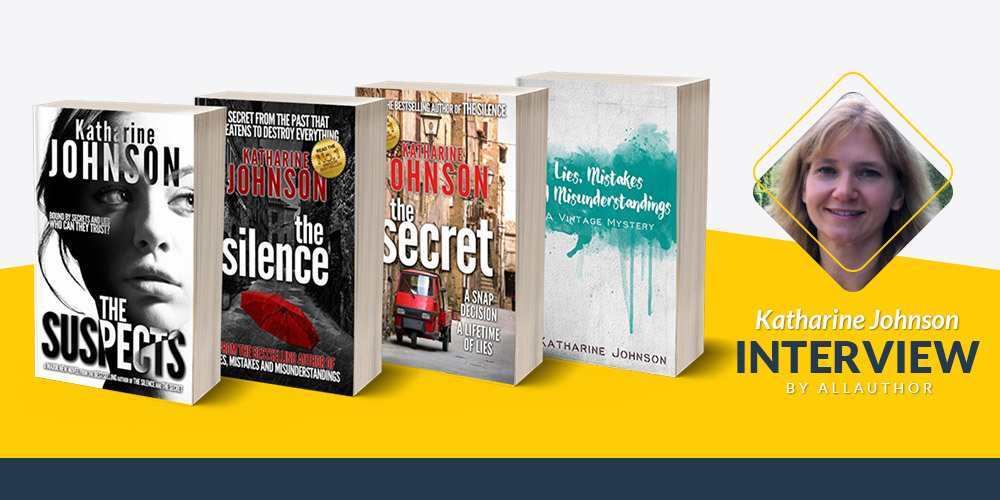 "Katharine Johnson's birth town where she grew up is Bristol, UK. Her first book Lies, Mistakes and Misunderstandings was inspired by a true story about a relative. Her parents were both teachers so she grew up in a house full of books. She loves psychological suspense because she has always been more interested in the whydunnit than the whodunnit. Currently, she is working on a London-based psychological thriller about a woman."
Where is your hometown located? Do you still live there? If not, do you plan on moving back there one day?

My birth town where I grew up is Bristol, UK. I still feel a strong attachment to the city and go back regularly as I have family there. I chose Bristol as the setting for The Suspects because it’s a big town with lots of shared Georgian houses with basements so it was easy to imagine a body being discovered after a party.

My first book Lies, Mistakes and Misunderstandings was inspired by a true story about a relative and grew out of a what-if situation but of course when I started writing it went off in a different direction!

What was your parents' relationship with reading and writing? What do they think of you being an author now?

My parents were both teachers so I grew up in a house full of books. My mother has a quotation for every occasion and an eagle eye for mistakes so is a brilliant beta reader.

My favourite part of the publishing journey for my first book was getting that acceptance email from Crooked Cat Books. I had to read it several times to make sure it was real!

What kind of research do you do, and how long do you spend researching before beginning a book?

The Secret which is partly set in Mussolini’s Italy needed a lot of research but I enjoy this (I trained as a journalist) and I love history (I did it for my degree.) I did a lot of reading, online research and visits to museums and real places as well as speaking to local people. A lot of what I found out didn’t end up in the book but was essential for me to understand my characters’ world.

I spend a lot of time in Italy as I have a house there which was helpful for researching The Silence and The Secret.

I’ve also shown my books to doctors, lawyers, police officers etc to make sure I get facts right - this has saved me from a few disasters!

Which of your characters in "The Suspects" is your favorite and why?

I think I like Emily best as the story’s told from her point of view so I feel I know her best.

What is your work schedule like when you are writing? What would you say is your most interesting writing quirk?

I write when I can wherever that might be but don’t impose a word count on myself because that would make me want to cheat!

What are some of the references you used while researching for the "The Secret"?

I got the inspiration for The Secret from visiting the village of Sant Anna Di Stazzema - near my home in Tuscany where one of the worst Nazi reprisals took place. The present-day secret guarded by my fictional village has its roots in a similar event in WW2 and is about the long term effect of betrayal.

What’s the most difficult thing about writing characters from the opposite sex? How do you select the names of your characters?

I don’t find it hard to write characters of the opposite sex because I think people are basically people. For my first draft of Lies, Mistakes and Misunderstandings I had two storylines, one being Jack and the other his daughter Julia but in my online writing group most people connected much more with Jack so poor Julia got the chop.

What is "The Silence" about and how did you come up with the idea for this book?

The Silence is about a British doctor, Abby Fenton, who has a seemingly perfect life - a rewarding career, loving family, desirable lifestyle - but she also has a secret that could destroy everything. This secret goes back 25 years to a summer she spent in a villa in Tuscany as a teenager - a summer that ended in tragedy. When human remains are discovered in the grounds of a Tuscan holiday home Abby recognises the villa and realises her secret is no longer safe...

I came up with the idea for the book when a human skeleton was found in a house near ours in Tuscany. I’d wanted to write a coming of age novel about a summer that changed someone’s life and Tuscany seemed an ideal location for this as it’s beautiful and some villages are very remote so it would be relatively easy for a body to stay hidden for many years but with the trend for restoring old houses it's likely the discovery would eventually be made.

What is it about the suspense genre that you enjoy writing it so much? Do you plan to explore any other genres in the future?

I love psychological suspense because I’ve always been more interested in the whydunnit than the whodunnit. However I do have a cozy crime series sketched out - I just need time to write it down.

If you could bring to life one character from all of your books, who would it be and why?

Oh what a question! I’d like to bring Stuart from The Suspects to life and give him better luck.

I’m working on a London-based psychological thriller about a woman who moves into an apartment and finds her neighbours’ behaviour very disturbing. Is it all in her mind or are they actually out to get her? It doesn’t have a release date yet because it’s still at an early stage but I’m very excited about it!

How do you try to grow from the reviews that your work gets- both positive and negative?

It’s a wonderful lift to get a positive review. After spending so long writing and rewriting a book and wondering if anyone will like it it’s great to find out that someone does. But sadly a hundred positive reviews don’t add up to one negative one in your head. I’m very aware my books won’t appeal to everyone so fair criticism is fine but spoilers and misrepresentation are annoying. As for vicious rants - I like to think they say more about the reviewer than the book.

I’ve joined other promotional sites but AllAuthor is the best! I came across it through seeing other authors using it - I love the review gifs and scheduled tweets and receiving my weekly mock-up is always a lovely surprise.