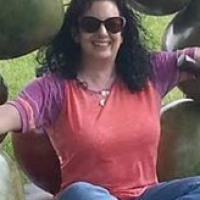 When Karen realized that flying an invisible jet and saving the day while wearing a swimsuit wasn’t a viable career path, she turned to teaching yoga and writing. She’s the author of a new superhero action romance trilogy, The Persistence of Memory, as well as several short stories and poems that have appeared in literary journals and anthologies. She has earned several writing awards, and earned her master’s degree in English in 1994. 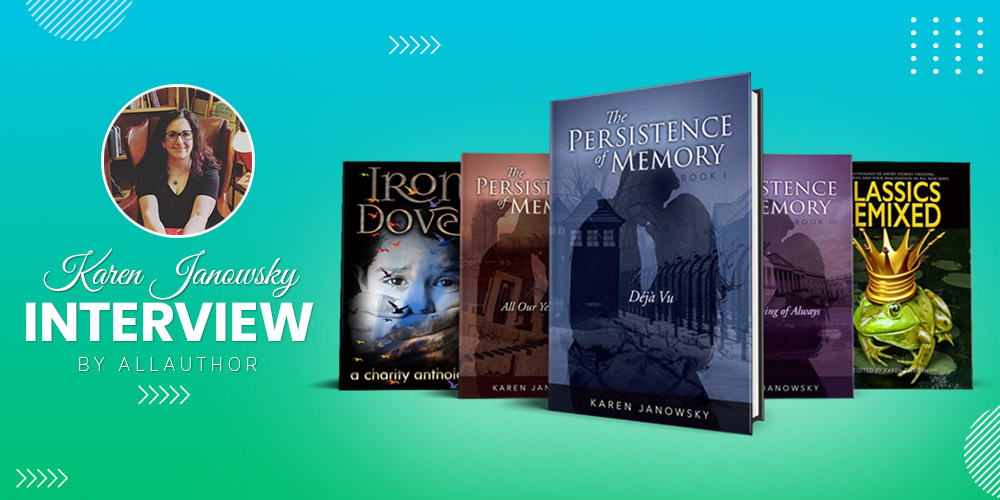 "Maryland author Karen Janowsky, who has been writing since the first grade, made an impressive debut with THE PERSISTENCE OF MEMORY. Having earned her MA in English, she now teaches writing at the College of Southern Maryland. Her first love has always been poetry. She apparently has a passion for ancient mythology and for superheroes! Janowsky's Persistence of Memory books is definitely worth the read."
Apart from flying an invisible jet and saving the day while wearing a swimsuit, what were your other childhood dreams?

I had a few aspirations. Until my second year in college, I wanted to be a psychologist. My real love since I was five though, was writing. Eventually, that became my path.

How and when did you turn to teaching yoga and writing?

I’ve been writing since the first grade. I was a shy kid, and this was a way to express my personality and creativity in a non-confrontational way. By the second grade, I was submitting to and getting published in my elementary school newspaper on a regular basis, and giving poetry readings for my reading class by the third grade (usually reciting Shel Silverstein, not my own work!). I discovered yoga during college. I found that it helped a lot with stress reduction. Eventually, I wanted to offer the gift of peacefulness I’d found through the practice by teaching it to others.

What are some of the challenges you've experienced as a yoga teacher?

It was a learning curve for me to get up in front of a bunch of people and have them copy me moving into strange shapes while I talked to them. I was already used to teaching and lecturing about literature writing by then, but this was a different kind of performance, and, perfectionist that I can often be, I was nervous about “getting it right” the first couple of years. Now I’m a lot more confident about my classes. I’ve developed a teaching style, I’m reasonably knowledgeable about the theories and philosophies as well as physiology of the practices, and have a bit of a following, which is gratifying.

How has your master’s degree in English helped you shape into a writer?

I’d say it in many ways made me a writer. Before my undergraduate major and my graduate program, I wrote as a hobby. I didn’t have much by way of discipline, technique, or direction. I had this idea that the best writing came from inspiration spontaneously. The master’s program, along with the mentors and colleagues I had along the way, shaped my writing practice and my attitude. I came to understand that craft and discipline were just as important as talent, if not more so. You can’t do much with raw talent beyond a certain point. There are brilliant exceptions of course, but I think ultimately, in order to be a serious writer, you need a solid background in the nuts and bolts of creative writing.

The Persistence of Memory Book 1 Déjà Vu beautifully blends multiple genres. What challenges did you face to blend action, sci-fi, fantasy, and romance together?

The main challenge was that, so I’ve been told, that mix of genres is rare. I had to be careful about balancing the tropes of each genre without relying on them too much, and staying away from the cliched language I see in a lot of genre fiction. Additionally, I went to a conference to learn how to write fight scenes and action sequences. My own background is literary fiction, and this kind of writing was new to me. I ended up turning a lot of conventions for genre writing on their heads or ignoring them altogether to tell the character-driven story I wanted. This experimentation proved unpopular with readers sometimes, since with genre fiction, readers expect certain things to happen and a certain style of plot-driven storytelling. More readers love it than hate it though (there don’t seem to be many in-betweens). It also was extremely rewarding to write though, and most professional editors and seasoned writers have said that while my take is very much postmodern, it works well, and they enjoy the books.

What inspired you to write a set of short stories, "Iron Doves"?

It’s actually an anthology of several writers. This was a charity book, and the editors accepted my work. All proceeds from sales go to the Iron Doves Foundation, which supports those who are in flight from abusive situations. My story, “Steps,” is about a spy who might or might not also be a Cthulhu-type monster who eats people.

What do you enjoy writing more - action romance books or poems and short stories?

My first love has always been poetry, and have been publishing in literary magazines since I was in my early twenties. Having said that, I’m having a lot of fun with the romance and action stories.

What is your greatest weakness? What are you doing to improve it?

Probably time management! If I’m writing, I have a hard time stopping, and my other responsibilities (including eating and staying hydrated) sort of fall to the wayside. I have to be careful about carving out time to write and working the rest of my life around that tendency.

What is your writing dream? How close do you think you are to achieving it?

It used to be to become one of those poets that students are forced to read from their Norton anthologies in English classes! Now, I want people to read, enjoy, and appreciate my work. I have no delusions of grandeur here. Stephen King or J.K. Rowling level popularity and financial success are a nice fantasy, but the reality is that they’re more than a longshot for any indie writer. So, I just want as many people as possible to like the books. Professional recognition is a plus, as well. One of my editors was pretty emphatic about querying my next book to agents.

How has been your experience of being at the book signings?

Mine have been pretty successful so far. It took a lot of advertising to get people out there though. I probably spent more on p.r. than I made in sales.

What inspired the plot for thought-provoking fiction & fantasy, "Classics ReMixed"?

Like Iron Doves, Classics Remixed is an anthology of several writers, one of which is me. The anthology consists of reimagined classic legends, fairy tales, and other fiction. My story is a modernization of Andersen’s “The Little Mermaid.”

Organization? Time Management? What are those? Seriously, as I said, this is my biggest obstacle. When I wrote the trilogy, I was at it nonstop, sometimes going without sleep for a couple of days at a time. I’m the same way with poetry and short fiction. It’s like the creativity spigot is on full blast, or it’s twisted shut tightly. When I’m working on a project, I have to keep notebooks and pens on me at all times. For that matter, I have to do that when I’m in front of my computer actually working on a project as well.

Read a lot. Read outside your genre. Read non-genre fiction. Read everything, and write for the love of it. Not everyone’s going to like your work, and it’s unlikely you’ll see your books on a shelf in a bookstore with the words “Harper Collins” or “Penguin” on the back. Dream big and try your best, but do this as a labor of love, because no matter what, that’s what it is.

Has your AllAuthor experience been a helpful and positive one so far? Is there anything you particularly like or dislike?

It’s been fantastic. Extremely helpful in several ways, from marketing materials to publicity to networking.

Have brimming questions to ask author Karen Janowsky? Ask the author whatever you like, but keep in the appropriate zone.
** Please note, unanswered questions will not appear on the page and refrain from posting promotional messages.

The author, a good book and you. Contact Karen Janowsky here.
** No Spamming: Spam is an irritant to regular users or the authors. Please note that bombarding promotional mails/messages is strictly prohibited. Your IP address may be blocked if found doing so.