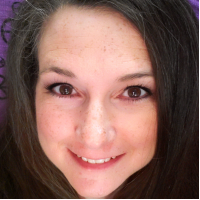 L. D. Nash was born early one stormy November morning. A warrior at heart, she's only killed people on paper and dreams of becoming a ninja; an idea her husband will tell you is impossible considering her severe clumsiness. She began her writing career at the age of 14 and hasn't stopped since.

Never tell her that she can't do something, because she will do it twice and take pictures. She lives in the piney woods of Northern Louisiana with her gorgeous husband, two rowdy grandsons, and entirely too many dogs. Once a month she turns furry and chases her tail, but otherwise, she can be found firmly rooted on her sofa, watching Supernatural and living vicariously through her many female heroines. 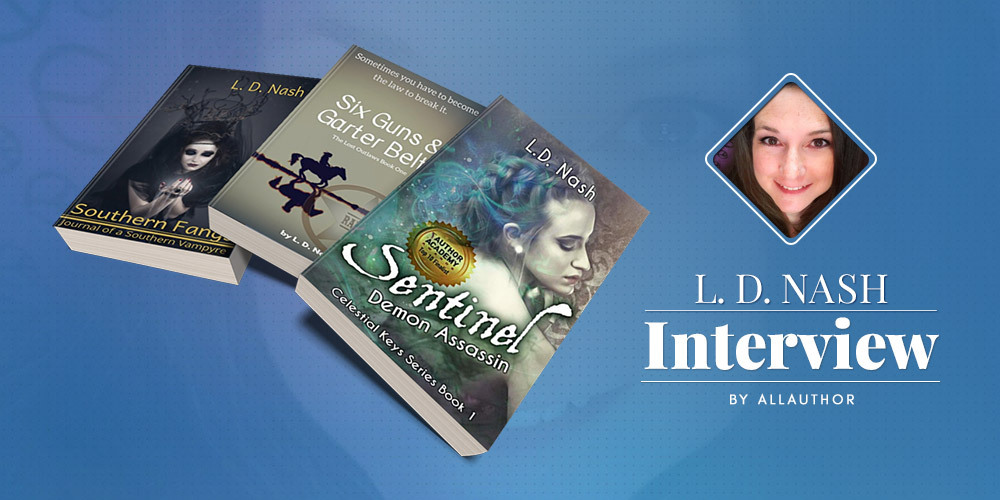 "Procrastinating her English assignment and writing twenty-five poems in one night made L. D. Nash fall in love with creating worlds. She even won three awards for two of those poems. She has a deep obsession with the idea of angels being warriors. The author is currently working on her first psychological thriller. She began her writing career at the age of 14 and hasn't stopped since."
Who named you L.D. Nash? Have you ever considered writing under a pseudoname?

"L. D. Nash" is my pseudonym! I went with my initials instead of my legal name because of J. K. Rowling's reason. I don't write romance, and female writers of science fiction, horror, and thrillers have a difficult time selling their stories. It's a sad fact, but true. I also wanted a bit of anonymity, some of my work is a bit racy ;-)

What inspired you to start your writing career at the age of 14?

My freshman english teacher gave our class an assignment to write twenty-five poems. We had a three-week deadline. Like any good procrastinator, I waited until the last minute, and ended up writing twenty-five poems in one night. I won three awards for two of those poems. I instantly fell in love with creating worlds and molding them to my will. One of those poems was published in an anthology!

Since how long have you been living in the piney woods of Northern Louisiana?

Ever since I was born! I'm a life-long resident, and would only move to Alaska or Hawaii!

How do you manage writing your books along with your gorgeous husband, two rowdy grandsons, and entirely too many dogs?

I don't manage! Lol, I squeeze in writing sessions whenever I can. I do most of my world-dominating while the boys are in school and hubby is at work.

What is the hardest thing about writing books filled with suspense and mystery? What inspired the story of Trinity?

I have no trouble with creating mystery and/or suspense. My imagination is naturally a dark place! I love watching horror films - the darker the better - so I usually play old horror movies while I write in order to set the mood.

I wrote TRINITY back in 2006, (two years before the release of WANTED, the movie featuring James McAvoy and Angelina Jolie). I loved the idea of a mega-bad female assassin. I wanted to write her as a ruthless, heartless creature who simply does her job and then goes home and sleeps like a baby. But throughout the story, Hope began developing a softer side. No matter how much I pushed her to be a badass, she kept softening up. So, I let her have her way.

And I know this wasn't part of the question, but I wanted to add that I still hadn't made any publishing headway with TRINITY by the time WANTED hit the theaters, so I shelved it in disappointment. I waited a sufficient period of time and then self-published because I couldn't stand the thought of readers not getting the chance to enjoy Hope's journey.

How did you get started with the Celestial Keys Series? What is the future of Luna Ashwind?

I have a deep obsession with the idea of angels being warriors. I began the Celestial Keys Series back in 2005, with the purpose of writing Luna as a demon assassin after a dream of an angel falling from heaven, stripped of her power, and struck with amnesia. The rest is "fly by the seat of my pants" adventure. Luna's future isn't definite yet, as I'm only on book 2 of the series, and I've only outlined up to book 4! But I can tell you that it will involve the Ultimate Sacrifice.

When it comes to writing supernatural suspense, what are some of your top tips? Do you wish to write in any other genre?

Writing supernatural suspense is second nature for me, but I can say that the weirder the better. Every idea under the sun has been written, so be different, be individual, and follow your imagination.

I actually write in many genres: paranormal fantasy, paranormal romance, urban fantasy, action/adventure, horror/thriller/suspense, psychological thriller, historical western (with and without romance), and children's stories! I don't restrict myself, I go where my muse leads me.

What inspired the plot for Southern Fangs? Do you draw inspiration to write from your real life instances?

My 3rd great maternal grandmother actually inspired SOUTHERN FANGS. She ended up running a prominent plantation near New Orleans after her parents died in a horrific accident. Since I can't write anything without a vampire or werewolf popping up, I decided to make Catherine a vampyre during a time when women weren't usually in power.

Who inspired the character Della in "Six Guns & Garter Belts"? How were you struck with the idea for this novel?

I love Billy the Kid and I love researching actual historical events. In thinking about how much of a lady's man William Bonney was said to be, I kept asking myself "How did he not have any illegitimate children?" Thus, Della (and others) were born ;-)

What has been your most memorable and enriching experience as an author so far?

My most memorable experience has yet to happen! But, for now, I'd have to say that my first negative review was the most memorable and enriching. After I stopped crying, I picked myself up off the floor, and began taking notes. I forced myself to evolve, and it's forged me into the writer I am today.

Is there a darker side to the book industry that you not many know about? If so, what are some things you do to keep your head above the water?

Honestly, I've only dipped my toe in the published waters. I depend on Draft2Digital and Kindle Direct Publishing to handle the rest.

Do you have any special rules in your house for when you're writing (no blending, no loud noises, no loud music, etc)?

Nope, I zone out when I'm writing. A freight train running through my living room wouldn't disturb me.

I want my readers to fall into my stories. I'm not a fan of flowery descriptions, so I tend to build a world, and I want them to feel like a part of it.

When did you first join AllAuthor? Has this site been useful to you? Do you have any feedback?

I joined AllAuthor about 5 or 6 months ago, with the hopes of finding a budding writer's community. Sure, there are many groups on all social media outlets, but I wanted a place to feel at home. AllAuthor has been very useful in helping me learn about marketing and promotions!