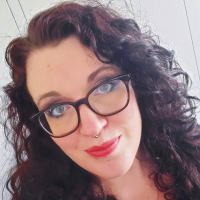 Marla Holt believes in second chances, romance, and the radical notion that everyone deserves a happily every after. She's living her own fairy tale, writing contemporary romance novels in her Kansas farmhouse with her husband, three boys, three cats, and flock of imaginary sheep. Follow her at marlaholt.com or on Instagram as @marlaholtauthor

"Author Marla Holt has lived in Kansas (American Midwest) for most of her life. The first piece she ever published was a novelette called When Abe Met Lane. She likes to push the boundaries a little with self-aware heroines and feminist heroes who are still swoon-worthy. Marla believes in second chances, romance, and the radical notion that everyone deserves a happily ever after."
Where did you grow up as a child? What was your favorite holiday as a child?

I have lived in Kansas (American Midwest) most of my life, which is why all of my books are set in that state, at least in part. I always liked Thanksgiving. Not for the problematic origins, but for the copious amounts of food and uninterrupted reading time.

Since how long have you been living in your Kansas farmhouse with her husband?

We moved into our house in September 2019. The buying process took us nine months, but it was totally worth it. We love living here and are excited to keep improving the house and the property. We just got our first little flock of chicks, and I'm planning a huge garden this summer. I can't wait.

I kind of feel like romance chose me. I hadn't finished a writing project since I'd graduated college, and was super frustrated. In November 2014, I decided I was going to win nanowrimo and nothing was going to stop me. I didn't have a plan outside of using a short story I'd written in college as a jumping off point. The original story had a young woman (Lane) going through a hard day and dealing with trauma at work, then on November first, Abe sat down at her counter, oh hey! I ended November with a romance novel.

What makes you believe in second chances?

I think people should be given room to grow and evolve. Sometimes we aren't allowed that space until adulthood and we make really stupid decisions while we're figuring out who we are. I think every one deserves a little grace.

What are some things that haven't been done in the romance genre that you hope to introduce through your books?

I wouldn't say it hasn't been done, because writers have been doing it since romance emerged. Romance has been a safe space for women to acknowledge and explore their sexuality and play with their independence since the genre was created. I like to push the boundaries a little with self-aware heroines and feminist heroes who are still swoon-worthy. Promoting ideas like consent and empowerment are a huge part of the way I write.

What was the first piece of writing that you published? What inspired you to write it?

The first piece I ever published was a novelette called When Abe Met Lane. It was meant to be a reader magnet for my upcoming full-length novel, but it was still a story I really wanted to tell. I had all these notes about Abe that didn't quite fit into The Other Lane, and he's such a sweet guy, I wanted the reader to have the opportunity to see behind his eyes.

What is the one most important thing you are trying to achieve by your writing?

I'm not sure I have great aspirations. I want to write quality, sexy romance with good characters that inspire readers to be better, to want better.

I'd probably watch a lot more television and actually finish some of my knitting projects for a change.

What is the story behind "The Other Lane: A Modern Fairy Tale"?

What do you enjoy most about writing contemporary romance? I touched on this a little bit above. The Other Lane started as a short story I wrote in college. It was probably the only piece I liked form my who college career. The book now doesn't resemble the original at all. During the writing, it sort of morphed into a Jane Eyre retelling mashed with a little bit of Cinderella taking place in a town a lot of people don't think much about.

Who inspired the character of Colleen Hawthorne in "Read and Wright"?

Out of all of my heroines, Colleen is probably the most like me, but I didn't draw from myself when writing her. She was originally written as the sister Juliet left behind, and evolved from there.

Are you friends with other authors? If so, how have they helped you in your journey as a writer?

I have become good friends with a few writers I've met online. It's a fantastic support group. We help each other out with beta reading and marketing. It's nice, since the actual writing process is so solitary, but we all kind of get how it feels.

Have you ever been approached by fans on the street? What's the nicest thing a fan has ever said to you?

Once or twice. I have to try really hard not to get embarrassed and clam up. Being an author in person is way different than being an author on the internet, and I have way more practice with the latter.

How did you begin writing the Try Again Series? Do you find it more challenging to write?

The Try Again Series was conceived and born right along with my youngest son. I was taking a break from The Other Lane and wanted to intentionally write a romance series. I had been pregnant three times in the course of as many years, so I'd been spending a lot of time with midwives. It seemed like a logical choice to write an opposites attract story between an OB-GYN and a midwife. The rest of the series sort of fell into place after that. Writing the series really helped me find my stride. Each book needed fewer revisions than the last, and I really understood my process by the end.

What other things, apart from writing do you enjoy doing?

I'm a bit of a home body. I like to garden and knit and cook and hang out with my kids. I'm well known for finishing a novel in a day when I'm not on deadline.

The cover contests are so fun. It's a great way to check out new books and new authors.

Have brimming questions to ask author Marla Holt? Ask the author whatever you like, but keep in the appropriate zone.
** Please note, unanswered questions will not appear on the page and refrain from posting promotional messages.

The author, a good book and you. Contact Marla Holt here.
** No Spamming: Spam is an irritant to regular users or the authors. Please note that bombarding promotional mails/messages is strictly prohibited. Your IP address may be blocked if found doing so.