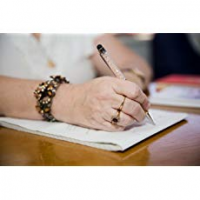 I am a former professional singer and actor who only realised I was ageing when I was offered the part of the ancient, grey-haired Granny in a stage production of The Addams Family. I decided then I had matured enough (physically and mentally) to give away theatre and turn to my other passion; writing, specifically, science fiction and even more specifically, time travel and space opera.

I am a complete Star Wars nerd! And I would say Star Wars (and Star Trek) sparked a fascination in me for building worlds and civilisations, creating characters and watching as their story unfolds. 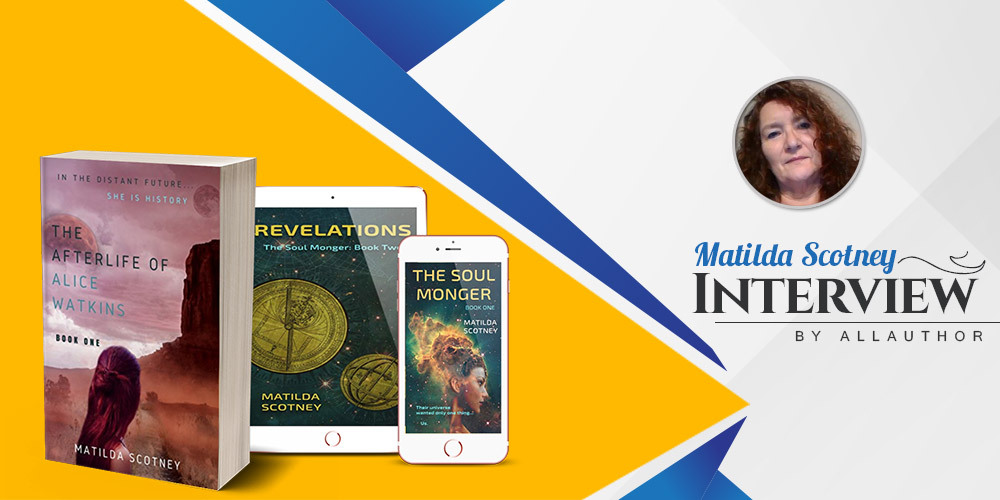 "A former professional singer and actor, Matilda Scotney writes well crafter stories that take the reader on an unexpected and captivating journey. Matilda's characters are wonderful! Scotney maintains her beautiful style of writing and is dynamic in her storytelling, keeping things a little unpredictable and ensuring the readers' curiosity. Her next book, Testimony: The Soul Monger Book Three is ready!"
Did you ever dream of becoming and actor?

No. It never occurred to me even though I liked showing off as a kid! I had a few speech problems as a child, so I had speech and singing lessons to help me overcome those difficulties. Singing led to acting; I would say I was a singer who acted but I did love acting.

What inspired you to start writing after being a professional singer and actor?

I was writing while I was on the stage. I wrote quite a few scripts during my time as a musical director. The “one day I’ll write a book” was in the distant future then but I would say, I have always been a writer, just not a science fiction/fantasy/time travel/whatever I dream up author.

What do you feel is the best song you've ever released and why?

I wasn’t a recording artist. I was classically trained but not a fan of opera, I loved art songs, music hall songs and folk music. I did sing in a Celtic folk band for a few years. I have an Irish background and loved the music.

What is some good Star Wars trivia that many people do not know?

Leia is nearly two years older than Luke even though they are twins. This is due to relative velocity time dilation.

What do you miss the most about performing on the stage?

I loved dressing up and “hamming” it and making people laugh. I mostly performed comedy. I even did stand up comedy for a while.

Spaceships. Aliens. A utopian Earth. What challenges did you face to write a believable science fiction story in "The Afterlife of Alice Watkins"?

Alice wasn’t a challenge to write. She was inspired by someone I knew and admired who didn’t believe she had anything to offer the world. I simply put that person into a place where she would be nurtured and loved and given opportunity. Five hundred years into the future seemed a good place for her and she did really well!

What would you have done if you had found the magical stone tablet that Laurel did?

Well, it wasn’t so much magical as informative. It certainly was a catalyst for an adventure!

What are some new ideas and writing techniques that you explored in the book "THE SOUL MONGER: BOOK ONE"?

Possibly that I explored the concepts of war, greed and the human capacity for both good and evil. The progression of the Soul Monger over the three books (the final one due at end-2019) has been a surprise as I would not normally explore themes of violence and torture.

Did you expect "The Afterlife of Alice Watkins" to become a finalist in 2019 Readers Favorite Book Awards - Time Travel Fiction? What was your reaction on the same?

No, I didn’t! I was so surprised and very pleased.

Are there any scenes or phrases from your books that you're particularly proud of?

I am proud of everything I write. But I recall someone believing the prologue of The Soul Monger Book One to be true! That was a moment of pride!

If you find a time travel machine, where is the first place you would go?

Everywhere. Then come home to my house for dinner. It’s nicer here than anywhere in the universe (or any universe)

What are some of the best experiences you've had as an author?

Letters from readers. Most inspiring, not to mention humbling.

Have you ever worked on multiple novels at once? What are you working on now?

Now that Testimony: The Soul Monger Book Three is ready, I have several other projects lined up which I hope will be completed till February 2020. The first is a sci fi novella.

What is a rookie mistake that many first authors make and how do you advice to avoid or remedy it?

I don’t know about other authors but the biggest mistake I made was approaching a vanity press. Fortunately, I woke up to them before I made a huge blunder, but it was ages before they left me alone.

Lastly, when did you join AllAuthor and what is it about this site that you love or hate?

I’ve been with AllAuthor for only a couple of months. So far I have only featured The Afterlife of Alice Watkins Book One. There is nothing to hate about AllAuthor although I do sometimes get confused navigating the site. I love the book banners, automatic tweets and I think AllAuthor is good value.