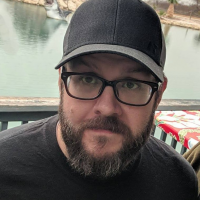 Considering his birth into the decade of disco and mullets, Matthew McCray managed to have a blessed childhood largely unaffected by either of those tragedies. Living in Dallas, TX, he spends the time between cups of coffee either writing prose or software.

He also practices his ABCs every day: Always Be Creating. 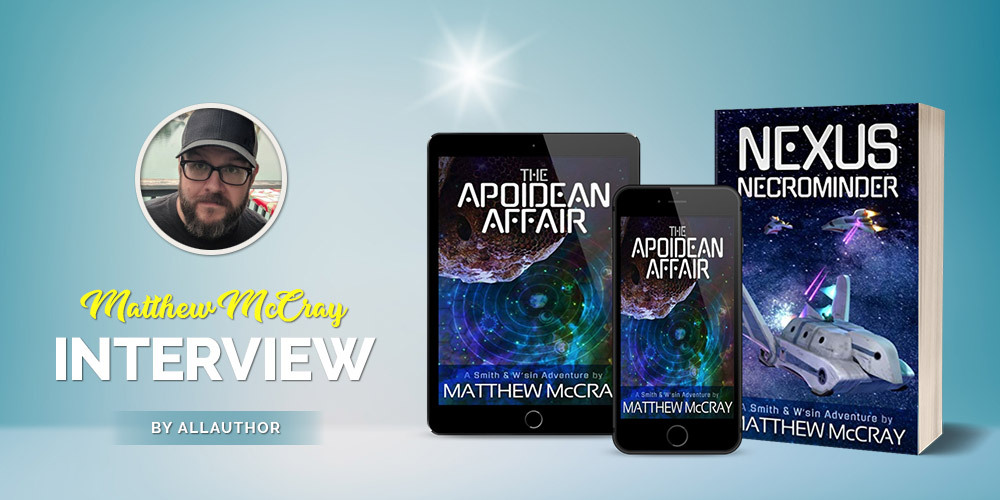 "Author Matthew McCray grew up in a lake town just north of Dallas, Texas. He really loves fun, escapist fiction. The first book that really made him realize that reading could be fun, truly entertainment, was "Max and Me and the Time Machine". He gravitates to stories that involve a couple of snarky people trying to survive a crazy situation. His book, The Apoidean Affair is a rollicking space adventure."
Where did you grow up? Where do you live currently?

I grew up in a lake town just north of Dallas, Texas. When I was a kid, it was kind of in the country. Which was nice, but driving thirty minutes to get to anything wasn't nice. Over the years, though, it's become a straight-up suburb. Crazy.

I've lived in other areas in Texas, other Dallas suburbs, and around Austin briefly. But I wound up back where I started. I guess you can return home... Although, as Joseph Campbell notes, not without changing.

What were you like as a kid? Did you love reading books?

I was always inquisitive as a kid. I would take my toys apart just to see how they worked.

"How things work" was a big theme of my childhood. It extended to my consumption of entertainment. Although it's harder to take a story apart and put it back together than a toy.

The first book that really made me realize that reading could be fun, truly entertainment, was "Max and Me and the Time Machine" (by Gery Greer and Bob Ruddick). I loved that book. Which is kind of funny, since I generally abhor time travel stories these days.

I read some before that book, but afterward, I couldn’t be stopped.

I'm not the type who believes in "heroes," per se. Never have been. But there are writers whose work I've loved over the years.

Author's work I really admire (in no particular order): Harry Harrison, Douglas Adams, Lois McMaster Bujold, Michael Crichton, Neil Gaiman, JK Rowling, Lee Child, and James Patterson. All genre writers, of course. I appreciate each of them for different aspects of their work.

Why did you choose to write in the fantasy genre?

Sci-fi/fantasy has always been my preferred genre(s) for reading, so, of course, it's what I gravitate to when writing. It's a combination of "write what you know" and "write what you want to read."

I really love fun, escapist fiction. Sadly, sci-fi seems to have lost its fun factor over the years. I'm hoping it'll make a come back. Until then, I'll try to do my part in adding the fun back into the genre.

How did you begin writing the Smith & W'Sin Adventures series?

Smith and W'sin, as characters, can be traced back several years to some micro-fiction I wrote. Then last year I took a pulp-fiction writing class, they seemed like great characters to use to tell that kind of story. I wrote "The Apoidean Affair" for that class.

Smith and W’sin are terrific characters. What inspired you to write their story?

Thank you very much.

Something I've noticed in my work: I really like buddy stories. I gravitate to stories that involve a couple of snarky people trying to survive a crazy situation. Not sure why, but I suspect it has something to do with Han and Chewie. Or possibly my first favorite book, "Max and Me and the Time Machine" -- It also had a couple of goofball friends having misadventures.

I mean, who doesn't like having adventures with their friends?

The Apoidean Affair is a rollicking space adventure. How much did you research while writing this book?

In a way, I've researched it my entire life. I've been up to my eyeballs in sci-fi/fantasy since I was a kid.

One thing that has been coming to the surface a lot in the Smith & W'sin series are the insect races. Book one has bees (apoideans), and there are ants (formicidae) in book two. They are all based on Earth insects, to some degree or another. And there are elements of real science surrounding them. Royalactin, for example, really is a mutagenic compound that creates queen bees. That's how new queens are "promoted.” A story element in book two (Nexus Necrominder) was based on a real-life fungus that causes zombie-ism in ants. Creepy stuff.

Oh, yes! I have ideas for standalone novels (and other series). Although I'm unlikely to work on them until after I finish the Smith and W'sin series. I've found splitting my attention isn't the best idea, creatively speaking. For me, anyway.

Ah, yes. Ideas. I think that we're each born with the ability to weave new ideas from the flotsam and jetsam wafting through the ether of our subconscious.

Alright, silly purple prose aside, I think that's true. But you have to put yourself into a position to accept the ideas. Like athletes, you can't just become great by performing your sport. You have to train your whole body, then layer on top the repetitions of practice unique to your game. You have to spend your downtime watching film, breaking down how others play the game. In time, all that work will pay off, and you will get drafted and instantly become a one-percenter, have fans tell you how great you are or how much you suck, have delusions of becoming a rapper… Wait, I think my simile drifted on me. Or did it?

I actually tend to read a lot. Fiction and nonfiction. Then I’ll think, “what if?” Really, I think that’s a big part of creativity. You fill your brain with raw materials, then give it time to settle and ask yourself what if? See what floats to the surface. You might be surprised.

What, in your opinion, are the most important elements of a good fiction story?

That's a tough one. There are lots of elements of good fiction, but few rules. Good stories are like a gumbo of the highest order.

I will say, an ongoing project of mine has been to figure out why some stories feel so good, and others just feel like a series of events. What alchemy is responsible for transforming events into story? I still don't have the answer. But I draw closer with each story I craft. It certainly involves characters having agency and actually changing/learning over the course of the story. Plus, a splash of symmetry is tasty. But that too may be a gumbo situation. I'll let you know once I have all the answers. ahem

How has the audience and readers received "The Apoidean Affair"? Does their response inspire you to write more?

So far, the response has been great. I've gotten some spectacular reviews that actually have helped fuel my creative fire.

I do worry about putting to much weight on reviews since that can cut two ways, but I won't lie... My first five-star review was quite exciting and satisfying.

I've always been a believer in writing the stories you want to read. If you do a good enough job, it should find its audience. I haven't seen evidence to disprove that, yet.

What's the weirdest thing a reader has ever done for you?

Well, I remember getting my first fan art for a webcomic I created. Knowing that someone liked my work enough to create art using my characters and then mail it to me was weird in a super cool kind of way.

What’s the last book you read and why did you choose to read it?

Currently, I'm reading the Dresden Files series by Jim Butcher. I read the first one years ago, but it didn't make a strong impression at the time. Since I’m sequestered away whilst the pandemic rages on, I decided to give them another chance. I’m glad I did, I've been really enjoying them. I guess I just wasn't ready for it back then. Funny how that is.

On the nonfiction side, I’m reading a book about advertising for indie authors because… Well, sadly, that’s one of the many hats we have to wear as independent storytellers. We can't just hunker down and write all day. Bah humbug.

If all things go well, I should have two more Smith & W'sin books released this year.

Have you had pleasant experience with AllAuthor so far and is this a platform you might recommend to others?

Yes, and yes. :-) It has a lot of useful features that I've taken advantage of and enjoy. The book mockups, for example, I've used a lot. Having my book featured has also gotten me some good visibility.

Have brimming questions to ask author Matthew McCray? Ask the author whatever you like, but keep in the appropriate zone.
** Please note, unanswered questions will not appear on the page and refrain from posting promotional messages.

The author, a good book and you. Contact Matthew McCray here.
** No Spamming: Spam is an irritant to regular users or the authors. Please note that bombarding promotional mails/messages is strictly prohibited. Your IP address may be blocked if found doing so.