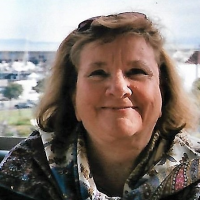 I was born in Santa Cruz, California to a family that migrated west to San Francisco in 1849. Unfortunately, they never found gold, nor did they buy (and hang onto) any California land. My mother named me Michael, after author and actress Blanche Oelrichs, who wrote under the name of Michael Strange. After months of saying, "Yes, she's a girl. Yes, her name is Michael," my mother finally caved and I became "Michele." I was read to as a child, and needed always to have a book with me. My maternal grandmother belonged to a writing club in San Francisco in the early part of the 20th century and wrote poems and jingles--one of which won her a travel trailer during the Depression. I've lived in San Francisco, the Bay Area, the Central Valley, the Sierra, Southern California and the North Coast. My first career was in journalism, and I spent seven years as a staff writer with the San Jose Mercury News. After returning to Humboldt State University to complete school and work on a master's, I fell into my second career, as a non-profit administrator, including a legal organization serving roughly 10,000 senior citizens in Alameda County. I'm a member of the Society of California Pioneers and Sisters in Crime and live in California's Central Valley with a cat, skunks, wild turkeys and an opossum (only the cat gets to come in the house). 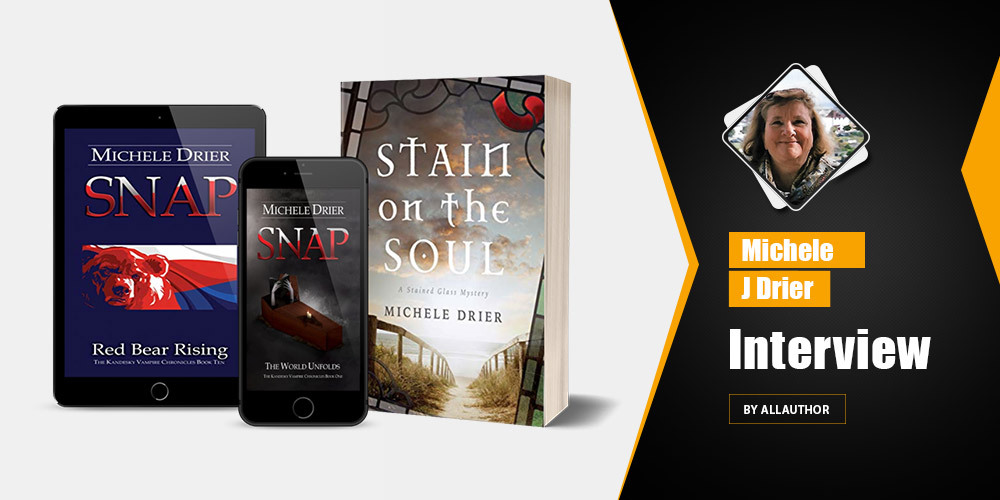 "Michele Drier is an author with a talent for a well-paced and descriptive tale. The author is a skilled world-builder. She has a way of keeping you turning pages in which you simply MUST finish in one sitting. Drier’s “Stain on the Soul” is a compelling mystery that is hard to put down."
Born in Santa Cruz, California, which is your favorite childhood memory?

I think going to thre beach. I used to love to find long strings of kelp and pretend they were jumpropes

Why did you migrate to San Francisco in 1849?

Well, it wasn't me, LOL. It was my great-great grandfather. He emigrated from Long Island and took a steamer around Cape Horn, arriving in San francisco in 1849. I suspect it was the lure of the gold rush. His wife joined him in 1852, traveling across the Ismuth of Panama on muleback.

Do you remember the first book you read? What was it about?

Hans Brinker and the Silver Skates. It was about a poor boy who wins a skating contest in Holland using old wooden skates.,

Why did you choose a career in journalism?

I've always been curious about things...everything from politics to science, and journalism gave me the chance to ask questions, research and write about it

How has been your experience of spending seven years as a staff writer with the San Jose Mercury News?

In today's media, there are very few daily newspapers left in thre United States. I still have friends I worked with there, more than 50 years ago, and we get together and lament the demise of good, local journalism. I was at the Mercury News when the Washington Post published the Pentagon Papers and started the fall of Nixon. Those were heady days when papers were uncovering a lot of government cover-ups. I cried when I saw the movie The Post. Those days seem to be gone.

How did you fell into your second career, as a non-profit administrator?

I believe in change to improve the lives of those struggling. I began in working for organizations that trained women for work and provided day care centers for children. I think there need to be organizatiions that fight for social justice.

How did you become a member of the Society of California Pioneers?

I can trace my family back to about the 1750s in Maryland, but being a fifth generation Californian, this state is part of my blood and bone. Both my maternal grandmother and grandafther lived in San Francisco during the 1906 earthquake.

What is your take on the importance of a good cover and title? Have you ever designed any book cover?

I think both the title and cover are very important...that's what grabs the reader first. I haven't designed any covers myself, but I do work very closely with my cover artist (she's designed 13 of my 15 published works and I love working with her).

How did you begin writing your book, Stain on the Soul?

I wanted to write a cozy, but discovered that I couldn't write a story without a serious theme, so Roz (Rosalind Duke) tries to hide away from the violence of her husband's murder in a tiny town in Oregon. Then she discovers violence is everywhere when one of her neighbors is stabbed to death...using one of her knives. I call it a dark cozy.

How did you come up with the idea for a multinational celeb TV show and magazine, SNAP?

My daughter and I brainstromed about it. I wanted to write a paranormal romance, but didn't want the usual blood, violence and teenage angst. She suggested celebrities because "they alll wear dark glasses, drive around in limos with tinted windows and only come out at night. They could all be vampires."

Who inspired the character of Nik Kandesky in "SNAP: Red Bear Rising"?

I don't know if he's based on any particular person. I tried to get in the head of a 15th century man who was living in the 21st century. He's managed to become technically literate and is fearless, but has no idea how to have a relationship with a 21st century woman. He's charming, cultured, handsome, gallant and absolutly clueless. I tried to give him all the charactistics I'd like in a man.

How do you aspire to portray your women characters in your books?

Any word of inspiration for budding authors of today and your avid readers?

Write what you know but stretch your knowledge. Challenge yourself. Understand the English language, grammar, dialogue, simile and metaphor. Use a sense of wonder and humor towards the world around you, Tell a ripping good story with vivid characters.

I have an additional six books plotted out right now, more in the Amy Hobbes Mysteries, the Kandesky Vampire Chronicles, the Stained glass Murders and three stand-alones, one romance and two suspense. I try and write two books a year, but I'm currently swamped as the co-chair for the world's oldest and largest mystery convention, Bouchercon, this October. We expect 1,700 diehard mystery fans to spend four days talking to authors and celebrating mysteries.

Have brimming questions to ask author Michele J Drier? Ask the author whatever you like, but keep in the appropriate zone.
** Please note, unanswered questions will not appear on the page and refrain from posting promotional messages.

The author, a good book and you. Contact Michele J Drier here.
** No Spamming: Spam is an irritant to regular users or the authors. Please note that bombarding promotional mails/messages is strictly prohibited. Your IP address may be blocked if found doing so.