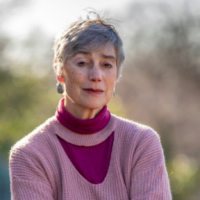 N.L. Holmes is the pen name of a professional archaeologist who received her doctorate from Bryn Mawr College. She has excavated in Greece and in Israel, and taught ancient history and humanities at the university level for many years. She has always had a passion for books, and in childhood, she and her cousin (also a writer today) used to write stories for fun.

The inspiration for her Bronze Age novels came with an assignment she gave to her students one day: here are the only documents we have telling us about a certain royal divorce in Ugarit in the 13th century. How much can we say about what happened? It quickly became apparent that almost anything we might come up with was as much fiction as historiography! Her Lord Hani Mysteries was a finalist for Best Series of 2021 in the Next Generation Indie Book Awards, and Bird in a Snare was the Grand Prize winner of the Chaucer Book Award for best historical fiction before 1750 in 2021. The Lord Hani Mysteries are in the finals for Best Series of 2022 in the Chanticleer Independent Book Awards.

Today, since their son is grown, she lives with her husband, three cats and a dog. They split their time between Florida and northern France, where she gardens, weaves, plays the violin, dances, and occasionally drives a jog-cart. And reads, of course. 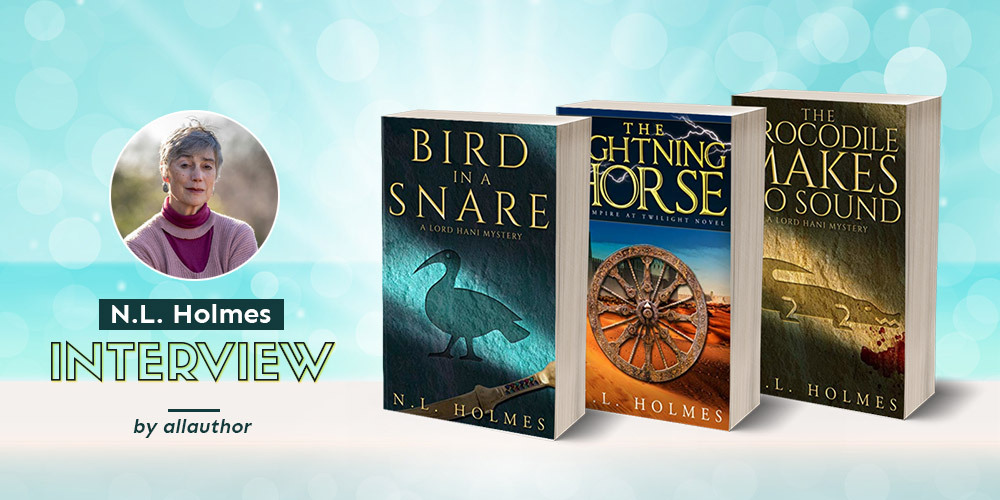 "Author N.L. Holmes loved books ever since she can remember. She has always had a passion for books, and in childhood, she and her cousin used to write stories for fun. Her books are entertaining and informative. The author describes the settings with gorgeous language and authenticity. She splits her time between Florida and northern France with her husband."
Do you remember the first story you and your cousin wrote for fun?

I don’t remember the very first one, which was probably about fairies… or else an Alfred-Hitchcock psycho thriller (we watched too much TV). But one I clearly remember was called “Chocolate Snow”, which was about the day frozen chocolate milk began to fall as snow. Eventually a kid saved the day by rolling it all up into a huge snowball and pushing it into the river. This was decades before Cloudy with a Chance of Meatballs. Another was a spy story taking place in the imaginary country of Moldavia. Imagine my horror when I found out that was a real place!

When did you develop your passion for books?

I’ve loved books ever since I can remember, even before I could read, memorizing them from having them read to me. One of my favorites was Margaret Wise Brown’s Pussywillow. My aunt was the book editor of the local paper, and she used to get review copies of everything that came out. She would farm them out to the family according to each of our interests. I used to read way above my level and look up words right and left.

Why did you decide to become a professional archaeologist?

I wanted to be an archaeologist since the time I found out what they were (this was after wanting to be a geologist and an ornithologist). Probably seeing 50s movies like The Egyptian or Land of the Pharaohs aroused my interest. At risk of dating myself, I remember collecting pennies to give to the fund to save Abu Simbel from the soon-to-come Aswan Dam.

In which year did you receive your doctorate from Bryn Mawr College?

Not until 2000. As you see, I got sidetracked along the way to my dream. I was a cloistered nun, an antiques dealer, a graphic artist, an office worker, and the executive assistant for an educational foundation before I went back to school.

Why did you decide to write under the pen name? How did you come up with your pen name?

The pen name is my maiden name (Niki Lynn Holmes). It seemed less gendered to use the initials. As to why use a pen name, as a professional in a field of ancient history, I felt I needed to make a distinction between my historiography self and my fiction self—if only in my own mind. The novelist makes very different decisions than the historian.

How has been your experience of teaching ancient history and humanities at the university level for many years?

I loved every minute of it. I loved working with students and trying to make complex subjects comprehensible. I loved trying to structure the courses to maximize their learning. And of course, I loved all the research in ancient societies. I always tried to keep my classes current, with the latest theories about everything. The only “minute” I didn’t really like was the endless grading.

How did you begin writing The Lord Hani Mysteries series?

My Hittite series, Empire at Sunset, came first. But it dawned on me that only about five people in the world apart from me cared about the Hittites. So I decided to pick another culture I loved which would speak to more people, and Egypt was the obvious answer. My Egypt class was so popular I had had to turn students away, so I knew people did love the Egyptians.

Who inspired the character of Uqnitum in "The Singer and Her Song"?

Gulp. Probably myself, at least in part. But none of my characters are wholly any one person. There are parts of other people in there, too—even my cats. This is fiction, after all!

How did you come up with the plot of your book, Bird in a Snare?

I read and reread the Amarna Letters, documents about the relationship between Akhenaten’s Egypt and its vassals to the north. I pulled out the events I wanted to use and worked them together. Hani was a real person, whose missions occur frequently in the Letters, so there was my protagonist.

How many books are you planning to write in the Empire at Twilight series?

Hard to say. I have one that didn’t gel, but I’ll attack it again some time. Then one that takes Hatti to the end of its days, already begun. So it will cover three generations, but there may be other stories stuck into the sequence as I get the inspiration.

What challenges did you face while writing the second book, The Singer and Her Song in the series?

This was grueling to write. It was so emotionally intense and full of horrible violence that I would be exhausted after a day’s work. And then the hardship of being inside an angry, traumatized person’s head for months… ugh. My later books have a much lighter tone.

I just completed a fourth Lord Hani Mystery and am starting on a fifth one. The Hittites are waiting in the wings until I need a break, but I have started one of that series as well.

How are you spending time with your husband, three cats, and a dog during quarantine?

Well, my routine hasn’t changed much. My husband is at home, teaching online, which has ousted me from my office, but otherwise I do what I always do: write, weave, walk, dance, etc. With so few temptations to socialize, I’ve been very prolific.

Don’t give up. Everybody tells you that, but it can really be hard to practice. Seat in the chair everyday. No quitting because you can’t get an agent or a publishing deal or a Man Booker Prize. Just do it, if only because practice makes perfect.

Lastly, how would you rate your experience with AllAuthor so far? Could you pinpoint some things you really like or dislike?

It’s been great. You guys really deliver on the publicity. And like many self-published authors, no doubt, I find the business of books to be unpleasant. I don’t even have a Twitter account, for example. But with AllAuthor, I know my books are getting out there in front of people. I also like the cover contest. I don’t have a big Facebook claque, so victory is not a possibility, but at least people are seeing my books.

Have brimming questions to ask author N.L. Holmes? Ask whatever you like, but keep it appropriate.
** Please note that unanswered questions will not appear on the page. Refrain from posting promotional messages.

The author, a good book and you! Contact N.L. Holmes here.
** Please refrain from spamming and don’t bombard the author with promotional mails/messages. Your IP/Email address may be blocked if found doing so.