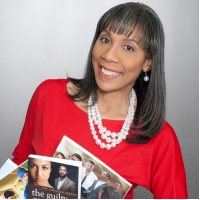 Pat Simmons is a multi-published Christian romance author with more than thirty-five titles. She is a self-proclaimed genealogy sleuth who is passionate about researching her ancestors, then casting them in starring roles in her novels. She is a four-time recipient of the Romance Slam Jam Emma Rodgers Award for Best Inspirational Romance. Pat’s first inspirational women’s fiction, Lean On Me, with Sourcebooks, was the February/March Together We Read Digital Book Club pick for the national library system.
Pat describes the evidence of the gift of the Holy Ghost as a life-altering experience. She has been a featured speaker and workshop presenter at various venues across the country. Pat has converted her sofa-strapped sports fanatical husband into an amateur travel agent, untrained bodyguard, GPS-guided chauffeur, and administrative assistant who is constantly on probation. They have a son and a daughter. Pat holds a B.S. in mass communications from Emerson College in Boston, Massachusetts. Visit her at www.patsimmons.net.

Pat Simmons has earned excellence awards over time. Here is the glimpse of the accolades clinched by the author. 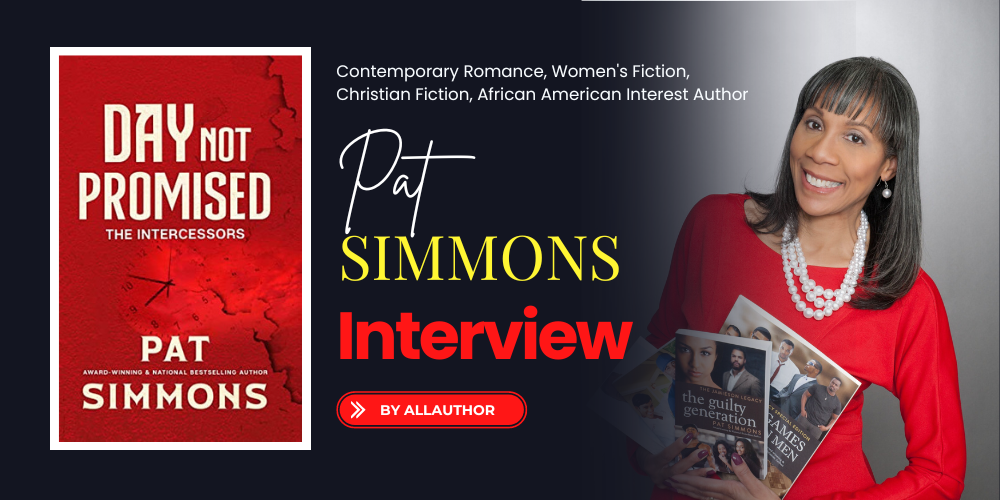 "A multi-published Christian romance author, Pat Simmons grew up in St. Louis. She holds a B.S. in mass communications. Her background is in broadcast journalism. She is the 5-time recipient of the Emma Rodgers Award for Best Inspirational Romance. She enjoys writing Christian romance to inspire and encourage readers to strengthen their walk with God and be faithful."
Tell us a little bit about your childhood and where you grew up.

My name is Pat Simmons, and I grew up in St. Louis. I’m the middle daughter with a younger brother who continues to be a brat. :) I attended private schools and had good mentors and developed a cultural awareness to be compassionate to others.

Have you ever stumbled across a family secret while being a genealogy sleuth?

Yes! I’ve uncovered the families who enslaved my ancestors on my maternal side of the family. I have extended information about her on my website under the “Roots” tab. Robert Jamison in Mississippi enslaved Charlotte Jamison Wilkinson. My second great-grandmother was so close to freedom (1865) when John Wilkinson, a guest in Robert Jamison’s house, fathered her two sons. The real surprise is that she died at 80 years old in 1930, living in the backyard of one of the largest former slaveholders in the area, Bird Caradine.

What encouraged you to be a genealogy enthusiast since your great-grandmother, Minerva Brown Wade, died in 1988?

Growing up, Grandma Wade was always old to me with her long white hair. No one, including my father, knew her exact age when she died. My background is in broadcast journalism, the reporter in me had to search for the answer.

Who was the first of your ancestors to be cast in starring roles in one of your novels?

Charlotte Jamieson—I added an ‘e”. Although, at the time, I didn’t know we had any ties to Jamisons in our family. I thought Jamieson was a random name when I named my characters for my first novel, Guilty of Love. I had always heard of her as Charlotte Wilkerson. It was an awe moment.

What inspired the story of your first inspirational women’s fiction, Lean on Me?

I had been my late grandmother’s caregiver. I experienced all kinds of emotions as a young mother of two, husband, and dog and responsible for my grandmother’s care after the sudden death of my father. That was back in the mid-90s, when I don’t think many knew much about a caregiver’s life: trial and error, sad and happy, and often exhaustion from doing it alone. Fast forward to 2019, my husband and I are caregivers to his ninety-one-year-old mother and his seventy-one-year-old disabled brother. I wanted to give the reader a peek in the window and be more compassionate when they meet caregivers.

How did you begin writing The Jamieson Legacy series?

I mixed my love of genealogy and romance to create Black characters who are strong, educated, and family-focused. I had no idea my first book, Guilty of Love, would become a series. The Jamieson Legacy is now ten books strong.

Who inspired the character of Queen Jamieson, the youngest sister of the Jamieson clan?

I already had strong Black men in the fictional family, and since they were tenth-generation descendants of a royal African tribe, it made sense to have the name for a woman. She embraces the strong Black single woman who is fierce, confident, and seemingly satisfied with her single status.

How did you develop the idea for your book, Crowning Glory: Restore My Soul?

It was the fourth book I wrote and my all-time favorite!!!! Since I have a background in news, I wanted to explore several subject matters: post-partum depression, Black women who are incarcerated at a higher rate than White women, and the struggles for victims of crime. In 1987, there was a heinous crime committed in St. Louis. By today’s definition, the death of five grocery store workers would have been considered a mass shooting. I needed an emotional backdrop for Karyn and Levi’s story. What would happen if a victim of crime and a perpetrator fall in love?

How do you see Jillian Carter’s character grow throughout the book, A Mother’s Love?

Although she’s happy about her daughter’s pending marriage, she doesn’t see herself as someone who can have a love of her own. She learns that life doesn’t stop when she becomes an empty nester, but it’s her opportunity for a second chance at love.

What are some things that haven’t been done in the romance genre that you hope to introduce through your books?

I can’t imagine. I enjoy writing Christian romance to inspire and encourage readers to strengthen their walk with God and be faithful, and Jesus will bless them.

What tools do you use to help you remember the content of individual workshops?

A simple folder on my desktop.

What are some good ways to improve English grammar and writing abilities for a non-native speaker?

Study books on the craft.

How many plot ideas are just waiting to be written?

I have a tucked away until I can get to outline them. Can you tell us about one? My November release is Day Not Promised: The intercessors, it’s a Christian fiction with spiritual warfare. This is a story the Lord told me to write. I had no idea there were more stories to come. Book Two will be The Prayer List: The intercessors.

What do you think of AllAuthor? Has this website been helpful to you? Yes!

I encourage my author friends to join. The book features and the tweets alone are priceless.

Have brimming questions to ask author Pat Simmons? Ask whatever you like, but keep it appropriate.
** Please note that unanswered questions will not appear on the page. Refrain from posting promotional messages.

The author, a good book and you! Contact Pat Simmons here.
** Please refrain from spamming and don’t bombard the author with promotional mails/messages. Your IP/Email address may be blocked if found doing so.