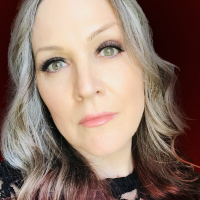 Pebbles is a contemporary romance and erotica author and writes bad boys desiring women who didn’t know they have a kinky side. However, she also writes strong female characters with a secret yearning to be loved—some have a dominant nature. The depth of the contemporary stories, the intensity of the romance, falling in love, and sensual, tender moments keep her readers coming back for more. 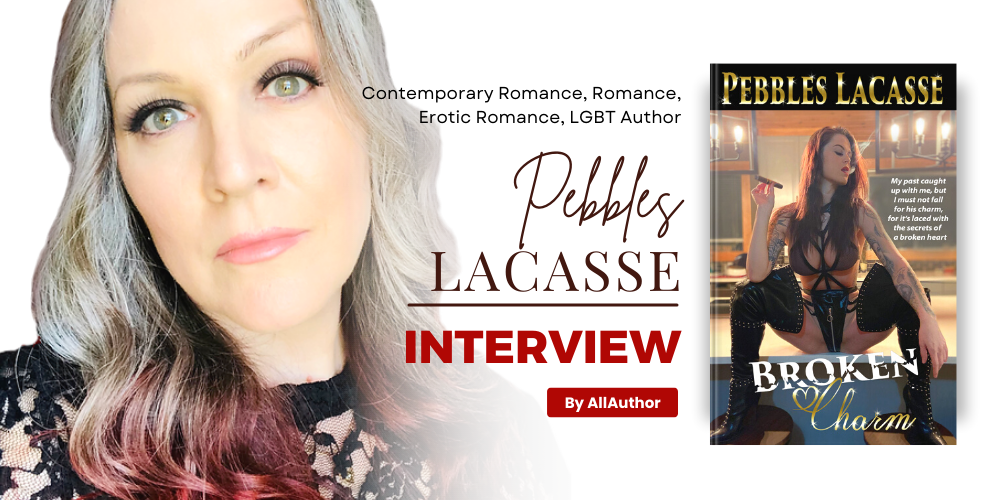 "Born in southern Ontario, Canada, Pebbles Lacasse is a contemporary romance and erotica author. Her biggest dream as a child was to become a professional gymnast. Her husband encouraged her to write a book. She aims to create stories that will take you away from the stresses of everyday life. She resides in southern Ontario with her husband."
Where were you born, and what was your childhood like?

I was born in southern Ontario, Canada. My parents were very outgoing and never wanted to stay home, so I have an adventurous childhood. My parents would pack my brother and I up and we’d travel by pick-up truck with a camper-cap to different campgrounds. During the winter months, we’d go skiing, skating, or tobogganing.

Do you remember the first story you ever read, and the impact it had on you?

It wasn’t likely the first story I read, but a child’s book I read repeatedly had a little girl on the front with braids that looped on either side of her head. The author and title evade me. It was about her being ill and not being able to dance or play with her friends. I always thought the dark-haired girl was so pretty. It’s strange how we see things as children.

What was your biggest dream as a child? Did it ever come true?

My biggest dream as a child was to become a professional gymnast. The majority of my non-schooling hours was spent in a gym, whirling around bars, flipping and dancing on the floor, balancing on the beam, and floating through the air on vault. I loved it! But childhood dreams fade, injuries happen, and we grow up.

What encouraged you to start writing stories of your own?

My husband encouraged me to write a book. Well, it was more of a sarcastic suggestion. I became ill and could no longer go to work, so I began assembling 5000-8000 pieces puzzles. He would frame them and put them on the wall. After I completed four, he begged me to do something else with my time. At a loss for suggestions, he joked about me writing a book. It sounded like a crazy idea at the time, but when I began writing, the words flowed so well, I never stopped. He takes all the credit for getting me started, but he deserves it. Thanks, honey!

What sparked the idea for your book, Little Miss Muffet?

My book, Little Miss Muffet, was supposed to be included in a fairy tales anthology, but it was cancelled. Since I’d already written the short story, I decided to publish it myself. Why I chose Little Miss Muffet as my baseline, your guess is as good as mine. It just popped into my head and I ran with it.

Who inspired the character of Beth in "Hello Officer"?

Giggles to herself The book, Hello Officer, is partially true. One morning, an officer knocked on my door because he saw the security cameras and asked to see the footage from earlier in the day. The recordings were accessible only on my bedroom television, so I sat on the bed and he stood nearby to watch the videos. He was dark-haired, and had sharp features with a gleaming white grin. I handed him my business card and told him to keep his eye out for a story about this exact situation. He was intrigued and said he would. If he read it, I’d love to know what he thought. The story was about hot, spontaneous sex… which didn’t happen in real life.

How do you make sure to draw young readers into your stories?

My stories are not aimed toward readers under eighteen. Engaging readers of all adult ages and holding their interest isn’t as hard as you’d think. To relate to my readers in their early twenties, or in their fifties and beyond, which is where I fit, my characters maintain a mature manner of thinking with regular lives we can all relate to. My audience has a vast age range, and I hope to keep it that way.

Have any negative reviews or constructive criticism come your way for your first book? How do you handle it?

Constructive criticism is a key element in improving a writer’s career. Being shamed isn’t helpful to anyone at any time, but for an author, I think it cuts very deep. Previous to writing erotica, were coming-of-age mystery and paranormal, which I had professionally edited. When I switched to erotica and romantic erotica, I was too embarrassed to give them to my editor, so I did the best I could and they were published. The reviews were okay, but there were some who called me out on my punctuation errors. I’ve since pulled those books and am in the process of rewrites and edits. So, the best advice I can give a writer is to always – ALWAYS – have your books professionally edited.

Do you write books with timelines in mind?

It’s not easy to keep a steady timeline when writing a story. I have a peg board with little timeline notes, that get switched and swapped until it all fits. There are aps for that, but I’m a little old-school and like to keep it tangible.

What are you trying to achieve through your writing? How far off do you think you are?

What am I trying to achieve through my writing? Hmm, that’s a great question. Too many people are afraid to experiment sexually, or even talk to their partner about their kinks and naughty desires. Quite often their partners also want to step it up in the bedroom, but are too ashamed or embarrassed to discuss it. So, they never get to play, and that’s a real pity. Through my writing, I hope to open the lines of communication between partners. How can anyone get what they want if they don’t ask for it?

Do you prefer writing on a notepad first or you directly start writing on your computer?

I’m a pantser! What that means is I never, or almost never, start with an outline on what I want to put in a book. My ideas are in my head when I begin to write, and I make notes along the way. I often don’t know who the bad-guy or gal will be until I’m writing the last few chapters of the book. That’s not to say I don’t have quick descriptions of stories I’d love to write pegged on my corkboard.

At the moment, I’m working on promoting my newest release, Broken Charm, and I’m preparing for the release of the first book in the republished series, My JoeSmith. That four-book series is set to begin it’s reappearance on the first of each month beginning in September. After that, I’ll take a breath, before I prepare for several other releases coming in 2023. I’m hoping to hit the #1 bestseller list in the near future.

I’ve been with AllAuthor for about a year. Being surrounded by so many talented authors is an honour I don’t take lightly. I wish us all great success as we take this journey together.

Have brimming questions to ask author Pebbles Lacasse? Ask whatever you like, but keep it appropriate.
** Please note that unanswered questions will not appear on the page. Refrain from posting promotional messages.

The author, a good book and you! Contact Pebbles Lacasse here.
** Please refrain from spamming and don’t bombard the author with promotional mails/messages. Your IP/Email address may be blocked if found doing so.