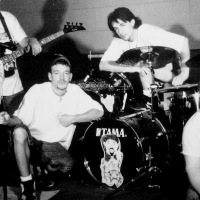 Whether busking on street corners in Philadelphia, New Hope, PA or Lambertville, NJ, singing in venues the size of a postage stamp, large as a theater or as dank and devious as the underground settings could be, writing lyrics, poetry, fiery political or social articles, hitting the streets or the airwaves to fight for the poor and homeless (especially teens), workers’ rights and many other causes close to his heart, or finding the time to sit down and write a series such as ‘PUNKS’, the sounds of anarchy also known as punk rock have been Rich Cucarese’s lifelong soundtrack and fueled his ambition to continually fight for what is right and just.
With a background as patchwork as his musical influences, Rich spent a few years in college (Pennsylvania State University, Ogontz/Abington Campus 1985-86), toiled in the massive mills of United States Steel Corporation’s, Fairless Works not too far from Trenton or Philadelphia, and when the majority of the plant was shuttered, he went through a series of changes leading him back into music, activism and a never-ending stream of writing.
Eventually returning to what had become a much smaller steel plant after the Free Trade shakeouts, Rich became more involved in the Steelworkers Union (USW) as Local 4889’s Rapid Response Coordinator; writing many timely, socially active pieces including ‘The Battle for Prosperity Over Poverty’, which was awarded Best News Story of the Year by the United Steelworkers Press Association.
He’s been interviewed by CNBC, MSNBC, BBC America and VICE News as well as various print sources about everything from Free Trade and its social impact on communities, to protests he was involved in such as Occupy Wall Street. As always, he will credit much of his social and political enlightenment to his punk tribe and the anarchistic upheaval of the norms that many punk rock groups espoused, whether they were on this side of the Atlantic or across the pond.
Rich resides in Bucks County, Pennsylvania with his four fiery but equally kind-hearted daughters, his funny, gregarious son and a wife who has actively supported his writings, his music; even though their musical tastes are worlds apart, and still manages to forgive his teenage stupidities like jumping headfirst and happily into mosh pits at an advanced age.