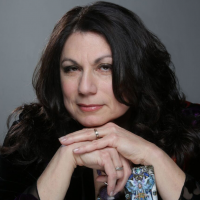 Corbie Mitleid has always been "the different one." A writer and visionary in a completely medical family (father a doctor, mother a nurse, brother a doctor), she has always made her own path rather than take one cut for her by others. Leaving an Ivy League university after two years, Corbie struck out to find out where joy and purpose lived, regardless of what she was told she "ought" to do.

The path wasn't easy. Two marriages, which didn't last, and a constant search for The Partner Who Understood. A succession of jobs. A series of spiritual paths. Moving up and down the East Coast for years, from Cambridge MA to Atlanta to Albany NY. Out of the blue, breast cancer--not once, but three times. Life became a roller coaster with no brakes, asking Corbie to survive divorce, abuse, poverty and life-threatening illness. But through all of this, she learned the value of the Examined Life: meeting challenges and always asking the next question, facing each new situation with strength, courage and humor.

Today Corbie brings a full toolbox to her job as a beacon of manifestation and vision for her clients. She knows what it is to create a career out of experiences. While she's now a full-time intuitive counselor and inspirational speaker, her career has encompassed positions as a published author, a professional actress, a television producer, a radio personality, an executive recruiter and the "power behind the throne" for a number of high-profile CEOs.

Reading since 1973, for almost two decades she traveled coast to coast across the United States and into Canada. Corbie has inspired and helped thousands of individuals every year as a teacher and facilitator, frequently appearing on radio and television. She is a featured channel in Robert Schwartz's breakthrough series on Karma and pre-birth planning, Your Soul's Plan and Your Soul's Gift.

Corbie's certifications and affiliations include Certified Professional Tarot Reader (through the Tarot Certification Board of America), membership in the American Tarot Association, and ordination as a minister of the Sanctuary of the Beloved (Order of Melchizedek). Corbie's specific skills include Tarot and Oracle/Divination card readings, spiritual/intuitive counseling, past life retrieval and analysis, mediumship, and spirit guide conferences (including speaking with one's Soul or Higher Self).

Corbie's clients treasure her unpretentious attitude. Despite having years of experience and a global profile, she says firmly, "I'm not special; you can do what I do. We have opportunities we can go after, and challenges to get past. My job is to give you the tools and courage to deal with both situations. Everything else is free will, and up to you!"

Corbie lives in upstate New York with her husband, a professional historian, and three cats: two large and exuberant Maine Coons and one lucky rescue kitten from the Bronx.

Corbie Mitleid is a thinker and a doer. These are the quotes by famous personalities the author resonates with.

Far and away the best prize that life has to offer is the chance to work hard at work worth doing.
Theodore Rooseveltbest 83

Have brimming questions to ask author Corbie Mitleid? Ask the author whatever you like, but keep in the appropriate zone.
** Please note, unanswered questions will not appear on the page and refrain from posting promotional messages.

The author, a good book and you. Contact Corbie Mitleid here.
** No Spamming: Spam is an irritant to regular users or the authors. Please note that bombarding promotional mails/messages is strictly prohibited. Your IP address may be blocked if found doing so.