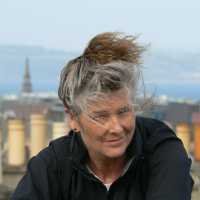 Sam McColl was born to a family hushed by violence. At the age of twelve she and her sister were orphaned. She modelled in London for several years working with Lichfield, Brian Duffy and other big names of the era. But stability was illusive and it was to be many years before she understood that no child is responsible for a parent’s rage, went into therapy and got her own life on track. She began working with vulnerable young people, who, unable to face the desolation of their pasts had turned to drugs or self-harm for consolation.
The Scottish Arts Council awarded Sam a New Writers Bursary. Call Billy 07899 232007 was published in 2018. Her literary agent is Futerman Rose Associates who are now submitting her second novel Call Abi to publishers.
Her work in progress is told by Batuk: ‘I sometimes wonder what it was about him that so held us. Certainly he didn’t crave it. I think it had something to do with a kind of wild courage, the kind of courage and recklessness you find in war heroes.’ It is, beyond all the heartbreak, madness and familial misunderstanding, an affecting story about love.

Sam McColl has earned excellence awards over time. Here is the glimpse of the accolades clinched by the author. 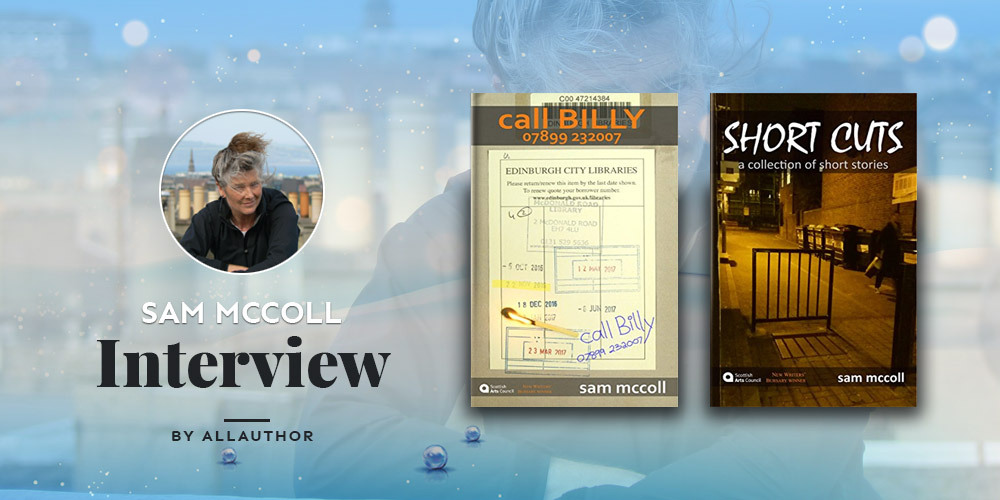 "Recovery from trauma is possible. Sam McColl was born to a family hushed by violence. Despite this, she managed to break that cycle and eventually began to write. Her debut novel, Call Billy 07899 232007 was published in 2018. You can call him. He will answer. He's pissed, in a pub, his phone is dying and he's desperate to find his old friend, Stevie. Sam has worked with and supported many vulnerable adults. Call Billy NOW!"
How did you and your sister survive the struggles of childhood? What kept you motivated?

Living with violence robs children, not only of a childhood, but also of potential. Chaos begets chaos. We both developed survival strategies to cope with fear, but few strategies to nurture stability. So even when the actual threat was no longer there, and we were free to make better friends and better families, it didn’t happen. Instead, desperate for love, but not knowing what that looked like, we, like most damaged children, ended up in a cloned family, facing more or less the same struggles, feeling the same pain.

Dismantling those learned defensives, detoxing from the addiction of withheld love, is disorientating, frightening and confusing. I haven’t seen my sister for almost thirty years. Surrounding myself with those who build trust and self-esteem rather than strip it away, will mean making some hard and sad choices. And when you haven’t grown up in a loving secure family, the work will always be there to do.

Do you remember the first book you ever read? Who is your favorite author?

Gosh – I don’t think I do. I remember The Famous Five, and loving it. And of course now I wish I’d had the kind of parents, who would have critically pointed out some of the dubious themes.

At what age did you begin writing your first story?

At forty. After I had left my marriage and was living in a caravan with my two youngest children, I needed something to do. I began a writing course – one of the ones you find in a magazine. Question one turned into my first novel. I never did the course. It took ten years.

If you could change anything in your past, what would it be?

How was your experience of modelling in London for several years working with Lichfield, Brian Duffy, and other big names of the era?

I was of course lucky to look the way I did. But I was a lost young woman. Struggling with my personal relationships, craving to be taken care of, I made some naïve choices. I slept with Brian Duffy who then booked me to do the Paris Collections. I was excited, a swanky hotel, meeting the great photographers etc. Brian turned up with his girlfriend and ignored me completely. I felt ashamed and never said a word about it to anyone including him. But I had some good times too… Litchfield asked me out countless times - I never went, but because he enjoyed the challenge, I got some very good photos out of knowing him. It’s a very fake profession if you don’t buy into it, very power driven, and I never did. I’m in Litchfied’s beautiful women book, known as Susan Ellison and his caption is telling. ‘Just another pretty girl in the seventies…’

In what ways did therapy help you to get your own life on track?

In every way. When you go into therapy, it’s not just a place to rant or pour out injustices in return for compassion and empathy. Therapy is a place to understand the dynamics of your family, the roles each family member fulfilled, where you fitted into the unhappy jigsaw. Only when we can see that, do we stand a chance of changing ourselves so we’re no longer a match to that kind of family. I was the good girl. Superficially, that seemed preferable, but my jigsaw never felt complete without the darker side. We were all in it together - every family is.

Did you expect to be awarded a New Writers Bursary by The Scottish Arts Council? What was your reaction?

I really didn’t. It was my second application. I recognised the envelope. I braced myself for the disappointment. These small kicks are a part of a writer’s life. I get them all the time! But when it’s a letter of acceptance or invitation or award … I guess I cried!

If you could pick one moment from your life, that you could relive again because it had such an impact on you, which one would it be?

Realising I could think things through.

Call the number and find out.

God knows. But when I need a character, I decide what sort of a person I need: chaotic, organised, mean, kind etc and create their childhood – the kind of childhood which would mould them to emerge as the adult I need. This way, when something happens, when they are cornered or betrayed or ecstatic, I know what they’ll do, say, feel. The book I’m writing now has been much harder than the other two – it’s the first time, I’ve attempted a saga, where the time frame is more than a year. My character Batuk, is looking back over thirty years. We know the end at the beginning. It’s thrown me completely. I’ve probably written ten books to help me understand this one, scrapping each one with a better idea. I’m scared stiff I’ll never get it right.

Just because I was living there. It’s easier to create a sense of space in a city if you know it.

Among the eight short stories in "Short Cuts", which one was the hardest to write?

None of my short stories begin as a short story. I adapt longer pieces. I might change the perspective, or the narrative as I work on it, but essentially, I already have the big picture. Salt Cuts was hard, because I couldn’t decide whose perspective it should be from. I rewrote it many times. I think it works okay now.

Oh yes. A book called Adam - a story about two friends with two secrets. Adam’s five year old sister, Bonnie, licks the LSD soaked smiley face stickers she found in Adam’s rucksack and ends up with permanent brain damage. They weren’t Adam’s – he didn’t know they were there. But he’ll never say. And one to find: what really happened to Batuk’s uncle? Why would no one speak of him – what was everyone afraid of? Is the letter about an honour killing gone wrong a vital clue? ​And was the scene at his grandfather's funeral really just an old servant’s bitter rant?

Or had his father sent him half way around the world, away from his beloved Jodhpur, to a boarding school in the wilds of Scotland, just to stop him asking questions? It certainly looked that way. It’s told by Batuk, looking back over his friendship with Adam who died, taking both secrets with him.

Have you had a pleasant experience with AllAuthor so far and is this a platform you might recommend to others?

I really have. I’d never heard of you guys until someone mentioned you to me. I signed up immediately – AllAuthor is easy to use, and versatile. I’d definitely recommend you to any author. And the opportunity to do an interview is an added bonus – thank you!!

Have brimming questions to ask author Sam McColl? Ask the author whatever you like, but keep in the appropriate zone.
** Please note, unanswered questions will not appear on the page and refrain from posting promotional messages.

The author, a good book and you. Contact Sam McColl here.
** No Spamming: Spam is an irritant to regular users or the authors. Please note that bombarding promotional mails/messages is strictly prohibited. Your IP address may be blocked if found doing so.