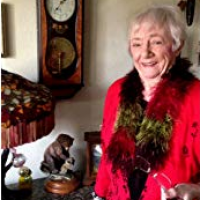 From a humble beginning in Newark, New Jersey, a short stay at a convent in Morristown, NJ at the age of fourteen, retiring from a fantastic career for a play broadcasting company in Carlsbad, California, to the rural foothills of the Sierras of Yosemite National Park, Sandra traded in the Board Rooms for the Ballrooms of the Regency period and never looked back.

Sandra wrote her first book at the age of fifteen. Romance is at best a gift and her passion is the Regency period. Admittedly, she would prefer to be the sister of a duke or an earl...perhaps even a princess? Or the other endless possibilities of a widow. Hmmm.

As a lonely only child, she used to read fairy tales and now she writes them. She admits freely she's an unapologetic story-teller.

Her debut novel was Once Upon a Duke, which received wide acceptance. She followed with Book Two, My Divinely Decadent Duke, a marriage-of-convenience story turned inconvenient when love and sensuality entered the equation.

Her third book, THORN, SON OF A DUKE, the prequel to her fourth book, THE DUKE'S MAGNIFICENT BASTARD is a 15,000-word teaser. She delineates Thorn's younger days as a half-breed subject to the malice of rock-throwing native boys. At the age of seventeen, his mother extracts a death-bed promise for him to sail the ocean to visit his father, the Duke of Althorn, who never knew of his existence. On the island of Barbados, it wasn't the best of lives, but it was the only one he knew. Now, he was to face British aristocracy as the bastard son of a powerful, wealthy duke.

Book Four she lovingly calls "My Bastard" is a multi-cultural romance story of a young couple defeating all odds to have their love accepted.The gossamer thread of sensuality is woven through the tapestried story of their spicy, steamy romance. At times, the obstacles are daunting.

With Book Five in this series, ONE NIGHT WITH A DUKE, she accomplished her life-long dream of publishing this story into a reality. What did it take? Cutting the too-long epic by 57,000 words was a prodigious task. She worked like a dervish, so her Raven and Samantha could see the light of a publishing day. She gave them cameo appearances in each of her books so she wouldn't forget that they begged to earn a place in the series. Seven years later, they made their long-awaited debut.

Now, she's delighted to say that ONE NIGHT WITH A DUKE, has been released.

For a new author, it's been a whirlwind two years and it was nothing she expected, but everything she dreamed.

Book Six is a work-in-process and her writing takes a different path into a dark, brooding fantasy where supernatural powers assist in prolonging the adventures of The Blue-Eyed Black-Hearted Duke. What man could resist redemption from the beautiful ward of his, Miss Jaclyn? Possible release end of 2017.

Two months ago, Sandra broke her right dominant arm, so she is tested every day to manipulate fingers that used to fly across computer keys. Some days are good and others are not, but her grit and determination keep her going.

Three months later, she underwent rotator cuff surgery on her left shoulder. A true test when both wings were broken, she said "Hello" to the Dragon Software program.

P.S. Sandra love bears of all sizes and shapes. However, she prefers to view the real-life ones from afar.

Sandra Masters
the style of the writer and the spice.