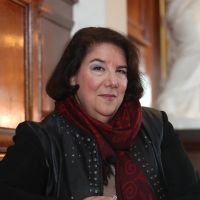 Award-winning and best-selling author, Saralyn Richard was born with a pen in her hand and ink in her veins. Her humor- and romance-tinged mysteries and children's book pull back the curtain on people in settings as diverse as elite country manor houses and disadvantaged urban high schools.
A member of International Thriller Writers and Mystery Writers of America, Saralyn teaches creative writing and literature at the Osher Lifelong Learning Institute, and continues to write mysteries. Her favorite thing about being an author is interacting with readers like you.
Website: http://saralynrichard.com.

Saralyn Richard has earned excellence awards over time. Here is the glimpse of the accolades clinched by the author. 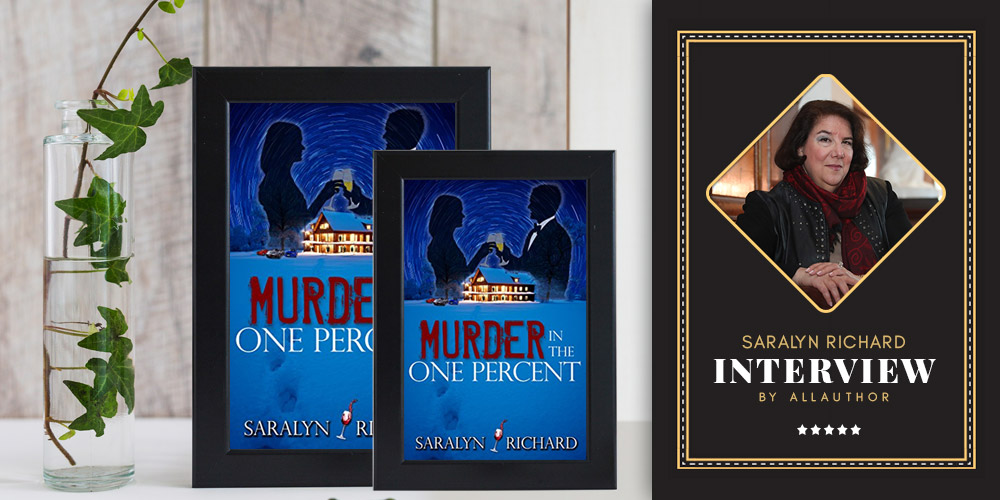 "Award-winning mystery and children’s book author, Saralyn Richard enjoys helping others, so she volunteers for various organizations and events. To her, life is about the connections we have with others. Her teaching career evolved into administration and consulting, and then she transitioned into writing educational materials and publications. The hardest scenes for her to read or write, though, are ones with violence. The author cherishes memories of her parents and other family members, teachers, and friends.
Currently, she is writing the sequel to MURDER IN THE ONE PERCENT, hoping to finish the manuscript by the end of December."

What did your childhood home look like? What were your hopes and aspirations as a kid and have you achieved any of them?

When I was a young girl, my parents built their "dream home." When I grew up and moved out, I lived a thousand miles away, but always loved my parents' house. After their deaths, I had the opportunity to buy the house, and years later to move back home. A hurricane destroyed it several years ago, but we rebuilt it and live there still. There is something about keeping my parents' dream alive that makes me happy. I've always been a reader, writer, and teacher, so I continue to fulfill those aspirations. I enjoy helping others, so I volunteer for various organizations and events. To me, life is about the connections we have with others.

What are some of your favorite childhood memories? Do you miss anything?

I cherish memories of my parents and other family members, teachers, and friends.Time spent together outdoors, playing games, going to parties, celebrating holidays, singing songs, talking on the phone, writing letters to each other. Today it's so much easier to keep in touch, but I miss the warmth and depth of those pre-electronics days.

Why did you choose the mystery genre? According to you, what makes an unforgettable suspense book?

Your book "Murder in the One Percent" features throwback to the Agatha Christie days. What made you write about it? What was the most fun part to write in this book?

Although I admire Agatha Christie's works, I never set out to emulate her writing. The inspiration for MURDER IN THE ONE PERCENT came from a party that I attended in Brandywine Valley, Pennsylvania, in an elegant country mansion. The area is so lush, so full of natural beauty and peacefulness. I felt it would make an ironic setting for a murder. When reviewers started comparing the book to Agatha Christie's, I was surprised and humbled. I enjoyed writing every character, every scene, and every chapter, but one of the most fun parts was writing the scenes with the billionaire playboy, Preston Phillips. Preston is the guy you love to hate. He is handsome and charismatic, but quite despicable in the way he treats others. It was fun to create the yin and yang of him.

Who or what was the inspiration behind your book "Naughty Nana"? What makes it such a memorable book?

Nana is my real-live Old English sheepdog. When she was a puppy, she was wilder and crazier than any dog I've ever known. One day when I was walking her and trying to figure out how to teach her to behave, I realized her shenanigans would make for a fun children's book. Much of the book's success comes from the life's lessons resulting from Nana's transformation, and the book has turned Nana into a celebrity.

What kind of research was involved when you were writing "Murder in the One Percent"? Who are some of the most interesting people you met while doing this research?

I'm glad you asked these questions, because many readers think I must be part of the country's wealthiest one percent, since I included so many details about how they dress and eat and spend their time and money. The reason I could write with such authenticity is because of the extensive research I did. I interviewed policemen, medical examiners, doctors, lawyers, party consultants, chefs, wine collectors, interior decorators, horse owners, hotel personnel, restaurant owners, people who work in the finance industry, cigar smokers, truffle makers, and the list goes on and on. Everyone I contacted was enthusiastic about the book and happy to contribute. One of the connections I made was with the people who work for "The Hunt," a regional magazine that features aspects of the life in Brandywine Valley. MURDER IN THE ONE PERCENT is the first novel that mentions "The Hunt," so I was welcomed into the fold there, and we continue to communicate. I'm still writing about Brandywine Valley in the sequel, and "The Hunt" continues to be a valuable resource.

Which was more fun to write- the children's picture book, "Naughty Nana" or the mystery, "Murder in the One Percent"? Why?

You are asking an author to choose between two of her precious children! Both books have brought me great challenges but also great joy.

"Murder in the One Percent" is set on a gentleman’s farm in Pennsylvania and in the tony areas of New York. Why did you choose this location?

I answered this question in #4, but I will elaborate by saying that many of the people who work in the finance industry work in or near New York, and many of them have second (or third) homes in laid-back areas like Brandywine Valley. The concentration of one-percenters is higher there than anywhere else in the country, except perhaps Silicon Valley.

What made you switch from a teacher who wrote on the side to a writer who teaches on the side? What are some similarities and dissimilarities in both professions?

Teaching and writing are so much alike. Both require a connection with another person in order to occur. Both require thinking, planning, organizing, implementing, monitoring, and evaluating. They require creativity and talent, but also skill and hard work. My teaching career evolved into administration and consulting, and then I transitioned into writing educational materials and publications. I started teaching creative writing and a literature class at the Osher Lifelong Learning Institute, and I realized this was the time to fulfill my dream of being an author of fiction.

What was your reaction when you got know that your first mystery novel has won an award? How things have changed after you switched to writing?

I'm delighted by every award and positive review that MURDER IN THE ONE PERCENT has received. It is such a thrill to know that the book has entertained, informed, and surprised another reader. I don't think I'll ever outgrow the excitement of that. Being an author and having my book appreciated and understood has made me more grateful than ever. I am grateful to so many sources, fellow authors, publishers, publicists, photographers, booksellers, and promoters, including AllAuthor. Most of all, I am grateful to readers. Without readers, there would be no MURDER IN THE ONE PERCENT.

While you are superb at writing mysteries, is there any kind of scene or theme that you struggle at writing (romance, racy, historical, etc)?

I love to read in many genres, and writing comes naturally to me in other genres besides mystery. The hardest scenes for me to read or write, though, are ones with violence. I am squeamish about blood and muck, and I don't want to imagine my characters with their heads or other body parts blown off. Because of this, it took me a long time to find the exact right poison for MURDER IN THE ONE PERCENT.

What is the best review you received for "Murder in the One Percent"? What was the worst and how did you deal with it?

The best reviews are those that mention multiple readings or staying up late to finish the book, those who were moved by the characters, and those who were surprised by the ending. The worst reviews are those where the readers failed to understand some aspect of the book, leading to misinterpretation of plot or character. I'm honored by the former and dismayed by the latter. I feel compelled to sit down and chat, explaining to the person what I meant by whatever he didn't get, but, of course, I don't. I teach my creative writing students that their work needs to stand on its own, and that when a book is published, it ceases to belong to the author and starts to belong to the readers. So I appreciate every review and reviewer and try to learn and grow from the comments.

If your book were to be adapted into a movie, who would you want to play the main characters in "Murder in the One Percent"?

I love imagining MURDER IN THE ONE PERCENT as a movie, and I have "cast" it in my mind many times. I also enjoy asking readers whom they would like to see in the roles. I don't want to limit a reader's imagination by naming particular actors, but I will say that the characters in MURDER IN THE ONE PERCENT will need to be good-looking, dynamic, and skillful. In addition to pulling off the suspense and intrigue, they have to portray a bit of romance and humor.

Are you working on anything new at the moment? If so, when can we expect its release or publication?

I'm writing the sequel to MURDER IN THE ONE PERCENT now, hoping to finish the manuscript by the end of December. Look for Detective Parrott (and Tonya) to tackle an art heist that turns into a murder.

Saralyn Richard
It's a gripping pageturner, filled with suspense, twists and turns, humor, and a bit of romance.

Saralyn Richard
Narrated by a fluffy sheepdog puppy, who just wants to have fun, but finds herself in trouble all the time, the book resonates with kids and the adults who love them. Purchase new at http://palmcirclepress.com/bookstore/

Have brimming questions to ask author Saralyn Richard? Ask the author whatever you like, but keep in the appropriate zone.
** Please note, unanswered questions will not appear on the page and refrain from posting promotional messages.

The author, a good book and you! Contact Saralyn Richard here.
** Please refrain from spamming and don't bombard the author with promotional mails/messages. Your IP/Email address may be blocked if found doing so.