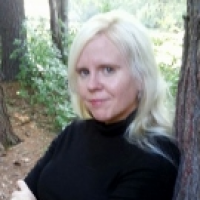 Sky Purington is the bestselling author of forty novels and several novellas. A New Englander born and bred who recently moved to Virginia, Sky was raised hearing stories of folklore, myth, and legend. When combined with a love for history, romance, and time-travel, elements from the stories of her youth found release in her books.

Purington loves to hear from readers and can be contacted at Sky@SkyPurington.com. Interested in keeping up with Sky’s latest news and releases? Either visit Sky’s website, www.SkyPurington.com, sign up for her quarterly newsletter, or sign up for personalized text message alerts. Simply text 'skypurington' (no quotes, one word, all lowercase) to 74121 or visit Sky’s Sign-up Page. Texts will ONLY be sent when there is a new book release. Readers can easily opt out at any time. 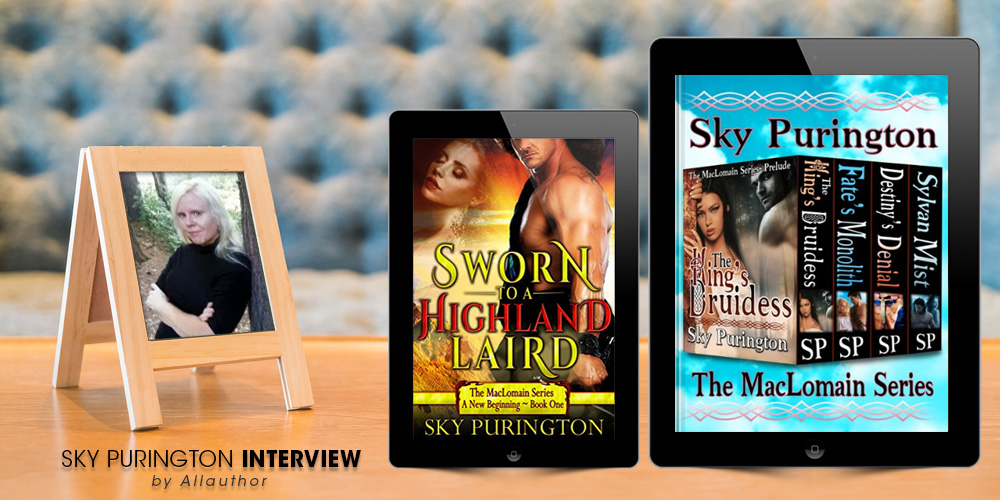 "Author Sky Purington grew up in Southern New Hampshire but has since moved to Virginia. As a child, she enjoyed bike riding, reading, and writing. Now, as a writer of four book series, she tries to keep herself on a regular schedule to meet deadlines. Half the reason she loves writing time travel is the challenge of proper perspective and dialogue. She hopes her romances will pass on the message to remain strong and never give up and that love, one way or another, can conquer all. Her favorite part of the writing process is character development, then researching and world-building. To her fans, she says “Thank You” and that they’re the reason she keeps writing."
Where in New England did you grow up? What motivated your recent move to Virginia?

I grew up in Southern New Hampshire and recently moved to Virginia because my husband was offered a job opportunity. Not only that but my sister was born and raised in Virginia, so in some ways, it was already home away from home.

What was your favourite way to spend your free time as a kid? What about now?

As a child, I enjoyed bike riding, reading, and writing. That hasn’t changed much as an adult though I tend to spend more time writing than anything else.

Do you have a specific writing schedule that you follow or do you just write whenever and wherever?

Actually, I try to keep myself on a regular schedule nowadays because I have to meet deadlines. As to where I write, typically in my office or in front of a cozy fire come winter. Well…as ‘winter’ as it gets in the south. I’m just too much of a New Englander to give up my fires altogether.

How many book series have you written so far and which is your favourite? Do you prefer writing series' to standalones? Why?

Technically, I’ve written four book series though three of them interconnect. The MacLomain Series Scottish Highlander portion includes 21 books. The MacLomain Series Viking Ancestors portion includes 10. Then there’s the Calum’s Curse Series (3 books) and my Forsaken Brethren Series (2 books). I absolutely love writing books in series mainly because I enjoy crossing over characters and interconnecting plots. I think my favorite series to date are about the Vikings. I never expected to fall so hard for them.

Are there any rules to writing time travel? Or does anything go?

I can’t speak to any rules set in stone, but I feel as a time travel writer it’s not only important to research the era you’re traveling to but to be careful about depicting your character’s POV (point of view) correctly. Every other chapter I’m in my hero’s head or my heroine’s. She’s from modern day, and he’s from the past. So it’s important to think like them. For example, a medieval highlander would never think something’s ‘awesome’ where a modern day woman might. That’s half the reason I love writing time travel. The challenge of proper perspective and dialogue.

Who is the best villain you've ever written?

I’d say Colin MacLeod. Or at least he was the most dynamic ‘bad guy.’ Not only was he a villain but a hero. You’ll find his story in Plight of the Highlander (Book 5 in The MacLomain Series: Next Generation) Best enjoyed if read in order.

How much research and history digging did you have to do to write Rise of a Viking? Have you ever watched the show VIKINGS? If so, what did you think?

There was quite a bit of history digging when it came not only to Rise of a Viking but my entire Viking Ancestors’ Kin series (now available in a boxed set!) I enjoyed the research though because I love history. It was so much fun learning about a new culture then, of course, world-building (did I mention my Vikings are dragon shifters?).

Between Laird Adlin MacLomain, Laird Alexander Sinclair, and Alan Stewart from The MacLomain Series Early Years, who would you love to take out to dinner and what would you ask them?

Hmm, I always sort of had a crush on Alan Stewart, but Adlin would never forgive me if I didn’t take him out to dinner. After all, he was once the immortal arch-wizard and founder of Clan MacLomain. Not to mention he’s now made appearances in at least 20 books and was the hero in two of them including Highland Defiance and Sworn to a Highland Laird.

As to what I would ask him… “Are you having fun yet?” Adlin’s a bit of a jokester so he’d get it. *winks*

Side Note: I would have taken King Alexander Sinclair out to dinner if I didn’t have to compete with Iosbail Broun. You really don’t want to mess with a lass who was an immortal witch for over five hundred years.

When you think of Arianna Broun and Laird Iain MacLomain's (Fate's Monolith) love story, what is the first word that comes to your mind? What kind of impression do you hope your romances will leave in your reader's hearts and minds?

The first word I think of when it comes to Arianna and Iain? Destined. They were the first couple I ever wrote about and paved the way for a series rich with destiny and fate.

What kind of impression do I hope my romances leave on readers? I think probably that love, one way or another, can conquer all. To never give up hope and stay strong. A lot of my characters, especially my heroines, face real life problems including rough pasts, loss, and even medical issues, and disabilities. So I try to offer readers a ‘Happily Ever After’ despite how overwhelming things might sometimes seem.

Great question! Calum’s Curse was definitely inspired by several houses that I’ve lived in. Though I have by no means dealt with anything as dramatic as the characters in my series, I’ve had my fair share of paranormal experiences. Everything from objects moving, to unexplained sounds to full-bodied apparitions. I’ve even dabbled in paranormal investigating because believe it or not, I run skeptical. I prefer to debunk things before claiming they might be otherworldly. So when I wrote this series, I was following the infamous writing rule/suggestion to ‘write what you know.’

I think Calum’s Curse’s main theme of being held hostage in a haunted house developed more around the idea of what it must be like to be on the other side. To be a spirit. Are they caught in limbo? Trapped? Can they cross over? On and on my curiousity went. Then I thought, why not trap someone still alive in a house to connect with that spirit or perhaps something far more sinister? And why not add hot paranormal investigators into the mix and introduce some romance. Hence a series was born…

If you could write a book in any other genre, what genre would you choose and who would you want as your mentor?

Probably straight Fantasy Fiction. Unfortunately, I couldn’t pick just one mentor. There’s just too much talent out there!

Is there a lot of travel required for the research of your books? What is your favourite part of the writing process?

Nowadays with the internet, traveling isn’t as necessary as it used to be though I’m sure it lends to the creative process. It certainly did when I stood at our little Stonehenge in New Hampshire, Mystery Hill. A location that has been used many times throughout my MacLomain Series.

I would say my favorite part of the writing process is character development, then researching and world-building. I love letting my imagination run wild.

What is the nicest thing a fan has ever said to you? What do you have to say for your fans?

My fans have said so many nice things over the years I could never pick just one comment. They’ve all made my day at one time or another. They’d be amazed how much their positive feedback meant. The number one thing I love about writing is making people happy, so it’s always incredibly rewarding when I know I’ve done that.

As to what I would say to my fans…You’re the reason I keep writing. Thank you all so much for spending time with my characters and for loving them as much as I do. You helped give them a voice and allowed them to share their stories. *BIG HUGS to every last one of you*