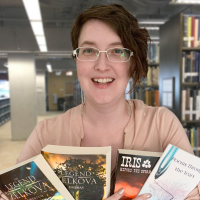 S.L. Vaden started writing short stories when she learned how to write and read. Taking inspiration from nature, and the world around her. Growing up on a small farm she learned how to take care of the land she lived on and to not take this world for granted. In the back of her mind S.L. Vaden had always hoped to become an author, never really telling her dream of becoming one to those around her, in fear the dream would be shattered. When S.L. Vaden moved from a rural town in NC to a larger city in San Diego, her imagination took flight. As she started a new job in a new city she started writing.

S.L. Vaden writes in two genres. First is high fantasy. Her first series: The Legend of Zelkova: Elementum and Umbras that will expand into its own literary universe. The first and second installments are now available. The third installment is in the works.

She also writes dark romance. These use strong language and intimate scenes that cannot be found in her fantasy novels. These books tend to be an outlet for pain she feels and to shine a light on depression and other invisible illness in an adventurous way.

S.L. Vaden invites you to come and take a look within the worlds that she has created. You might be surprised at what you find there. 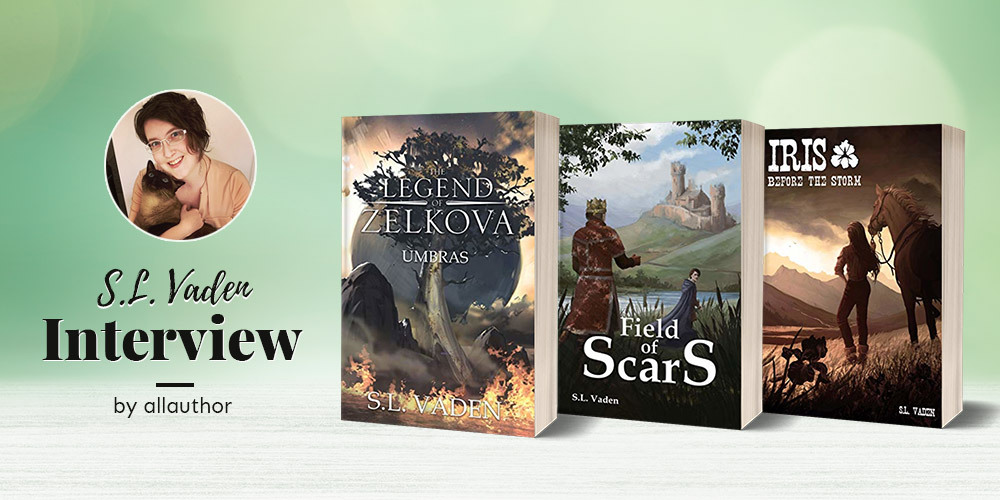 "Author of 5 published books, S.L. Vaden has taken inspiration from nature, and the world around her. She has turned her inspirations into amazing stories to perfectly suit the taste of any reader. Her books have something for everyone and never disappoint. Her writing moves smoothly and transitions nicely between scenes. From powerful, deep poems to the stories of friendship and love, S.L. Vaden has excelled in every genre and made fans worldwide."
Which is your favorite childhood memory?

One of my favorite childhood memories was exploring the woods at the back of my parent's farm with my brother. Being in nature and seeing all the different trees and landscapes brought my imagination to life. I loved being in nature, surrounded by towering trees, magnolias, willow oaks, walnuts, and pines. Each having their own mark, their own identity.

I also have fond memories of being in the garden. Planting seeds, and then harvesting the crop in the summer. Sitting with my family snapping greens or shucking corn will be something that always stays with me.

The love of nature had been implanted in me at a young age. This only grew as I got older.

It was either 'she said yes' about columbine shootings or Anne Frank. A tragedy that is taken from real life makes me cry more than any others. Especially ones that could have been avoided, or changed, if someone had spoken out or stood up.

I have recently started reading, All But My Life by Gerda Weissmann Klein. The first several chapters already had me in tears. Thinking of how families were pulled away, sent to camps, and even to their deaths. This also makes me think of how families today are still being torn apart and sent to camps. I feel we have learned nothing from our pasts, and history is only repeating itself. This, too, shakes me.

I liked writing as a child but kept the want of being a writer to myself. I didn't share this dream in fear it would be shot down. Making me not want to pick it back up. It didn't come to fruition until I moved from my home state when I was twenty-eight. After writing my first book, The Legend of Zelkova: Elementum, was when I told everyone that I was now an author. Even if some disapproved, it was too late. I knew then; I would always want to write.

What does your family think of your writing?

They’re all supportive. Some of them aren’t big fantasy fans but read it all the same. I guess you could say fantasy, in general, isn't their genre.

What inspired you to write the first book, The Legend of Zelkova: Elementum?

With this book, I think it was nature. The want to protect it, to show that we need the earth we live on, that it is something to be respected and not taken advantage of. It will live on without us, but we won't live without it. Also, there aren't a lot of main characters in mainstream books that are LGBT. I wanted to include characters for them and to show that not all heroes have to be one traditional character type. With the stories I write, they tend to be on the darker, deeper side of things, exploring the emotions that we all feel and face in everyday life. There are several layers to my books if the reader takes a closer look.

How long did it take you to write your book, Iris Before The Storm?

The writing process took about ten months. The editing part seemed to take almost as long but was only about four months. So, all in all, over a year. This was the shortest time span in which I had written and edited a book, and it's also my second longest so far.

How difficult it was to create a plot two hundred years after the events of the first book while writing "The Legend of Zelkova: Umbras"?

Zelkova and Carya are very unique character names. How did you come up with the names of your characters in The Legend of Zelkova?

This again comes from my love of nature. Zelkova is the scientific name for Japanese elm tree. Carya is the scientific name for hickory. I've always loved nature and trees, which made me look up different names of trees, moss, flowers, and even mold. Nature is everywhere, and I love to find different names for things that many people don't even know exist.

What was your experience of writing a collection of poems, Poems Through the Years?

It was easier to put together than my other books. One reason for this is because 95% of the poems I had already written and just needed to put them together. I had started writing poetry at a young age, around twelve or so. Poems, for me, are a way to let out one's deepest thoughts and feelings. It's like reaching deep into one's self and taking a piece of you and putting it onto a page. In a way, it's quite freeing.

Do you try more to be original or to deliver to readers what they want?

I lean towards being diverse and original. To push away from cookie-cutter and white-washed characters. To have worlds where they don't have to follow the rules that are set for us in society. Such as how a male and female should or shouldn't act or dress. Breaking the barriers that people set on each other, and on ourselves is what I want to break. Not just breaking the glass ceiling, but the walls that surround us all, keeping us inline to what society views us as. One of my poems even mentions something like this.

Having written more than fifty poems over the years, what is the most difficult aspect of writing poems?

It is finding words that flow with what you are feeling. Trying to get a poem that flows like a smooth stream is harder than a poem that is like choppy waves. But then again, strong waves can break through walls.

I do. I tend to wonder why, when I get reviews without comments. It’s nice to know why the reader liked it or disliked it. But I try and keep in mind that everyone has their own opinions. And not everyone is going to like everything that no one can please everyone. And that no one is perfect.

If you had to do something differently as a child or teenager to become a better writer as an adult, what would you do?

I would have taken more writing classes, read more, and believed in myself more. But then again, if I were to go back and change things, I wouldn't have written the books I have. My life would be completely different. It's interesting how small choices can make big changes in one's life.

I am currently working on a few short stories that are different from my full-length novels, as well as my next romance and Zelkova book. I tend to write a couple of things at once. When I hit a lull in one, I switch to the other. It helps to keep the writing going, instead of focusing on just one, it's usually two or three.

It's been about seven months. I like how it helps authors come together, helps organize their works, and provides advertising material.

S.L. Vaden is a thinker and a doer. These are the quotes by famous personalities the author resonates with.

If more of us valued food and cheer and song above hoarded gold, it would be a merrier world.
J. R. R. TolkienFood 79

Only you can control your future.
Best Life 52

Why fit in when you were born to standout!
Dr. SeussUncategorized 38

I meant what I said and I said what I meant.
Dr. SeussMeant 30

Fame youll be famous as famous as can be with everyone watching you win on TV Except when they dont because sometimes they wont..
Dr. SeussDespair 22

Have brimming questions to ask author S.L. Vaden? Ask the author whatever you like, but keep in the appropriate zone.
** Please note, unanswered questions will not appear on the page and refrain from posting promotional messages.

The author, a good book and you. Contact S.L. Vaden here.
** No Spamming: Spam is an irritant to regular users or the authors. Please note that bombarding promotional mails/messages is strictly prohibited. Your IP address may be blocked if found doing so.