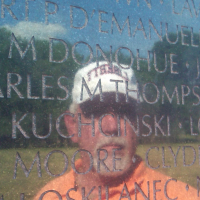 “The Gumdrop House Affair” is the second volume in a five-volume series authored by Tim McKeever. The murder mystery series centers on Father William Yeats Butler a Franciscan Monk assigned to St. Benedict the Moor Catholic Church in the “Capitol Hill” area of Denver. An ex-Police Detective Butler, now a Police Chaplin for the Denver Police Department continues to be drawn into major Investigations.
This is familiar territory for McKeever who spent over thirty years in the Criminal Justice System primarily as an Investigator. McKeever began his Law Enforcement career in 1966 as a Military Policeman serving in Viet Nam from December 1967 to December 1968 encompassing the 1968 Tet Offensive.
Returning to Michigan he joined the Lansing Police Department and worked Patrol in mostly high crime areas. 1973 brought a move to the Lakewood Dept. of Public Safety, Lakewood Colorado. Patrol, Supervisor of a multi-jurisdictional Narcotics Unit, K-9 Handler, District Attorney Investigator continued to expand McKeever’s investigative experience.
From1995 until retiring in 2010 McKeever worked as a Criminal Defense Investigator for the Superior Court and then the Public Defender’s Office of Yavapai County Arizona. Since he knows the “Streets” from both sides it gives McKeever’s writing a realistic insight and realism not often found.
A World and National record holding Power Lifter, McKeever founded the REC-N-CRU Power Team in 2010. As a Team, they set or broke over 200 World Records in two different Drug-Free Federations.
However, it is as a Masterful Story Teller that McKeever excels. As a self-proclaimed “Thick headed Irish Catholic with a Zen Blend” McKeever’s faith and the Catholic Church are forces throughout Vol. 1 The Monk and Vol II “The Gumdrop House Affair”.
“I’m just an average guy with tons of stories to be told from my experience and a long time “Observer” of Humanity at its best and worst. I don’t give any Institution including the Catholic Church a sugar coated free pass. I do however, speak for all those Men and Women who spend their lives living up to the Vows and Oaths they took. The good ones never get enough press, and the bad ones get more than they deserve.” 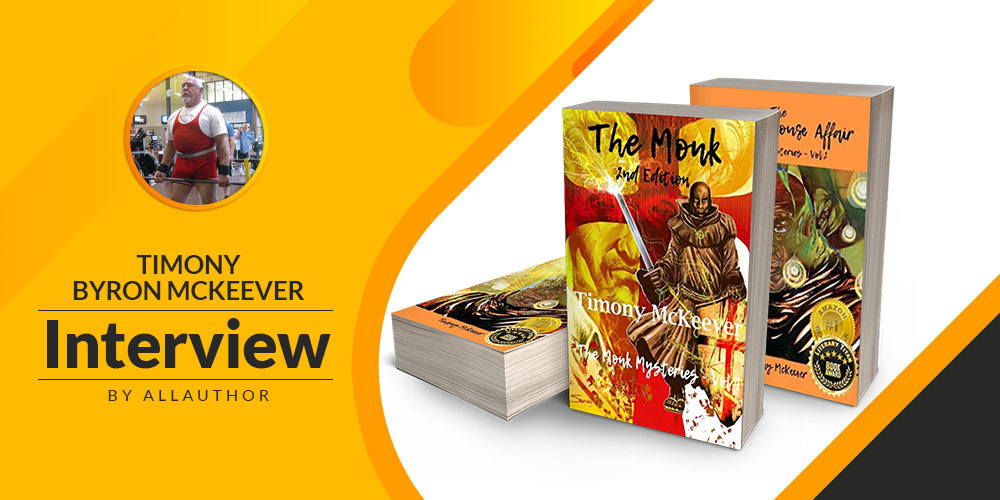 "Growing up, Timony Byron McKeever dreamed of having a Jaguar XKE, cool apartment, and a high paying executive job. He prefers to call himself a "Critical Thinking Observer of Humanity”. His first book “The Monk” was the hardest to write, took him years. He was the inspiration for Laskey because in so many ways he was Laskey. An Academy Award and the Pulitzer Prize is his author dream. His tip to all writers is “Write what you want to say, not what you think I want to hear.”"
What were your dreams growing up?

To have a Jaguar XKE, cool apartment and a high paying executive job. Near the ocean and a big dog.

What inspired you to start writing?

I couldn’t yell loud enough for the World to hear me. There is very little that one human being can do to another that I haven’t had to deal in the course of the investigation. I am a recovering cynic and sadly the recovery is going slow. So, instead of saying that humanity is highly overrated, I prefer to call myself a “Critical Thinking Observer of Humanity” and the writer of the truth as I see it.

What motivated you to form the Rec-n-Cru Power Team in 2010?

I formed the Rec-n-Cru after I retired. I’ve been a Personal Trainer and Coach for years and love the competition. It’s just you fighting gravity. The team was 8 men and 5 women we called “The Iron Maiden’s”. We lifted in 2 Drug Free Associations. Everyone on the Team had at least one National record. Most of us had World and National records.

Why did you choose this genre?

People write about they know and I know the streets, crooks, the hustles and the system. It’s not like television. I’ve worked undercover, K-9, Patrol, investigations both prosecution and defense and 17 Death Penalty cases. It’s what I know and lived for so many years of my life.

What quote or one movie changed the way you think or live your live?

“Dirty Harry” the movie. Quote: “You work your side of the street and I’ll work mine.” Steve McQueen as Lt. Frank Bullitt. Draw what conclusions you will.

How did you begin writing The Monk Series?

The Monk and Laskey were born in my mind and then I had them talking to each other as partners and things just began to evolve. Then I gave them family and situations to deal with.

What was your favorite and least favorite part of the publishing journey?

With fiction you use your own reality, the world is as you see it or as you feel it should be. Between The Monk and The Gumdrop House Affair I found my own voice and that opened a better quality for the reader.

My least favorite part was the actual logistics of formatting, editing and finding quality people to assist in the process.

Tell us about the process for coming up with the cover for your books?

I have a friend who has drawn for Marvel and DC comics for years named John Stanisci (JohnStanisci@Yahoo.com). I wanted a cover that would grab you and wasn’t a cookie cutter look. John has written bestselling Graphic novels and I would tell about the book, the high points and the main story line. He would go back to his board and start giving the characters a face. We would go back and forth and tweak what was needed until I could see the book in it’s cover.John does covers for self publishing Authors.

Are all the characters like Popcan Charlie, Peaches, Aunt Rhoda and Father Gus real people? I wish they would ask why police relations are such a problem these days. What happened to the trust? My answer is twofold. First the Cops aren’t taught how to fight without weapons and to be in good physical shape. Too many go to the gun too quick. However, the most important weapon a Cop has is the ability to talk to people not just talk at them.

What sparked the idea for your story, “The Gumdrop House Affair”. Who inspired the character of Sargent Jack Laskey?

The Monk, Laskey and I were having a conversation about the state of the Catholic Church, Police work in general and my cynical view of American culture one night over an Irish whiskey or two. We decided we needed to write at least four more books. “Death by Kachina” is being written now. It has been said that wandering around in the “Mind of McKeever” can get a little strange.

I was the inspiration for Laskey because in so many ways I was Laskey. Now I hope I’m more like the Monk. They are my Yin & Yang. One black with a white spot the other white with a black spot.

What is your Author dream? Do you have any other aspirations that aren’t writing related?

An Academy Award and the Pulitzer Prize. To love who I am and where I am and continue to learn “To be”.

What challenges did you face writing your first book?

Rejection, frustration, anger, failure . Then I said to myself, “Bullshit, I’m going to finish writing this book and maybe a few more.”

What do you often do on your weekends? What type of music you love to listen to?

Spend time with my Wife and dogs and Norte Dame and the NFL when in season. Bob Seeger, ZZ Top, Lynyrd Skynyrd, Ted Nugent and Molly Hatchet. I’m stuck in the 70’s and early 80’s. When I write it’s Hillary Stagg, Kitaro and Dean Evenson.

“You have to make the Monk earn it himself not lucky gifts. Find your own voice.” From my friend Dan Gordon who is a well known Screen Writer. He wrote “The Hurricane” that starred Denzel Washington. My tip to all writers and this is my quote is “Write what you want to say, not what you think I want to hear.”

What do you think of All Author and it’s services? Do you have any feedback?

It’s so refreshing with so many cons out there that All Author delivers what they promise and more. I recommend its services to everyone. I will be an eternal customer. Professional, high quality product. You guys make me look good.

Have brimming questions to ask author Timony Byron McKeever? Ask the author whatever you like, but keep in the appropriate zone.
** Please note, unanswered questions will not appear on the page and refrain from posting promotional messages.

The author, a good book and you. Contact Timony Byron McKeever here.
** No Spamming: Spam is an irritant to regular users or the authors. Please note that bombarding promotional mails/messages is strictly prohibited. Your IP address may be blocked if found doing so.