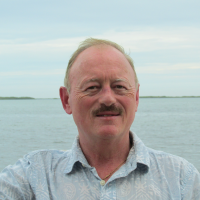 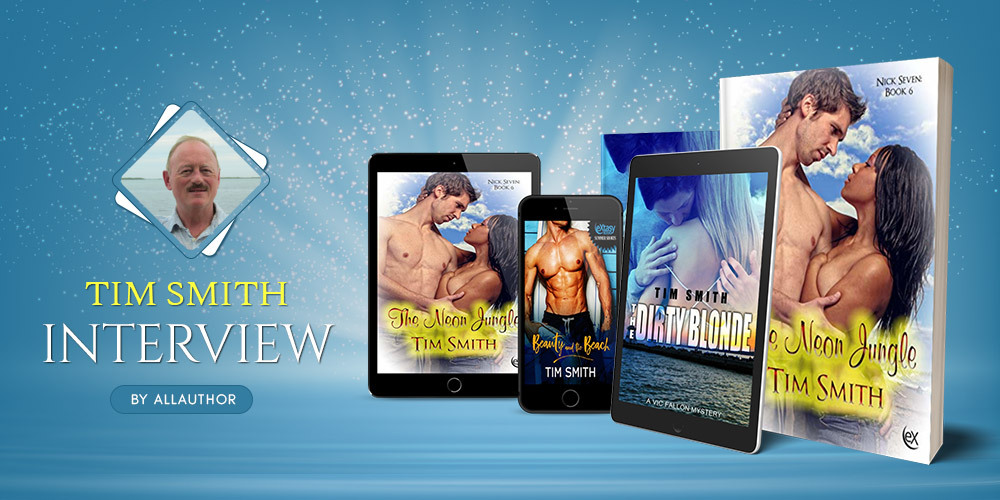 "Author Tim Smith weaves engaging mysteries and romantic suspense stories. The author keeps the tension going and the reader involved in his stories. His characters jump off the page with the lucidity and precision of outstanding characterization. If the suspense is your cup of tea, you can't go wrong with Tim Smith."
What was the first story about that you ever wrote? Since when have you been writing?

I began writing short stories when I was in high school, but I can’t recall what the first one was about. Whatever it was, I’m sure it wasn’t very good, because I didn’t hit my stride as a writer until years later. I discovered that it helps to have some life experiences before you undertake something like writing a novel.

What developed your passion for reading and words?

My mother got me hooked on books when I was very young, and at some point, I thought I’d like to try writing something of my own. What really got me into contemporary fiction was my fondness for classic movies, especially film noir crime capers. I’d see one on TV and if it was based on a book, I’d get it from the library. My mother could usually suggest other authors who wrote in the same genre, and I’d seek out their books.

When and why did you choose to become an author? Who do you write for?

I wrote my first novel, the original “Memories Die Last,” in 2001, just to prove to myself that I could do it. After a few people read it, they encouraged me to seek publication. I think I did it on a dare. I lucked into a publisher who liked it, it did well critically and commercially, and I followed it with two more. Around the time book number three came out, I decided I wanted to work for a better publisher. I was fortunate enough to get picked up by Extasy Books ten years ago. We’ve been together through 21 books, with no regrets.

“Memories Die Last” is an intelligent, well-written, suspenseful and romantic read. What gave you the idea for this book?

I had an idea about a former spy who walked away from the intrigue because of a personal tragedy that he’s kept buried, one he can’t face. He gets back into the game when his former employers convince him that the case that’s been haunting him may not be closed, after all. He feels the need to achieve closure, and to stare down those personal demons to find inner peace. I’ve always been intrigued by the concept of something from a person’s past coming back to haunt them later in life. I chose to name him Nick Seven and placed him in Key Largo, Florida. He needed a companion, so I created a former co-worker from Barbados named Felicia Hagens, who has always had a crush on Nick but never acted on it.

How did you begin writing the Vic Fallon series? Do you find it more challenging to write the first book in a series or to write the subsequent novels?

The Fallon series came about because I kept coming up with story ideas that were moreappropriate for a wisecracking private eye than for a former spy. Some of the plots I wanted to write didn’t seem well-suited for Nick Seven, so I created Vic Fallon. I’ve always liked the Phillip Marlowe stories by Raymond Chandler, and I wanted to write something in that style. As to series writing, I find it more challenging to write subsequent novels. I do all of mine as stand- alone entries, and they don’t need to be read in order. The challenge is providing enough background on the characters to introduce them to new readers, while not boring series followers with a full resume. Compared to that, writing the first entry is relatively easy.

What is it about the romance genre that piqued your interest? What are some things to keep in mind while writing a romance novel?

Initially, I got into writing contemporary romance because I felt there weren’t many straight romance stories told primarily from the man’s point of view. I enjoy telling a modern romance with humor, and showing an evolving relationship. I always keep the conflict in mind, and it can take many forms. I’m also mindful of what makes a relationship work, and that people have differences to overcome. Most love affairs don’t involve Prince Charming or Rapunzel. Life is difficult, and so is any successful relationship.

What were some things you were hoping to achieve when you wrote the book "Beauty and the Beach”? Do you think you accomplished these goals?

My goal was to write a hot sexy beach read about two people who have a friends-with-benefits relationship, and the moment they both realize it’s progressed from frivolous to serious. To add a glamour element, I made the characters a famous model and her favorite photographer, who has always looked out for her best interests. I wanted to show that two people in that type of relationship can achieve a happily-ever-after because it was there the whole time, but they just didn’t see it. I feel I accomplished that goal.

“The Neon Jungle” came from my desire to write a tough urban crime thriller with a romantic undertone. There are some erotic encounters between the two main characters, but the emphasis is on the crime caper element. I was able to draw on my personal experiences with the music business, including some acquaintances who may (or may not) have been subtly portrayed. There’s a dark underside to that industry that I wanted to shine a light on. The challenge was creating realistic characters and intriguing situations while maintaining a fast pace. Overall, it was one of the more fun stories I’ve written.

To be honest, it isn’t something I dwell on. I’m proud to call myself a professional writer, and I feel lucky that I’ve been able to publish so many books. I’ve been blessed with generally good reviews, and I’ve cultivated a following. The accolades are gratifying, but the nicest compliment I can receive is when someone says they can’t wait to read my next book. It doesn’t get much better than that!

Who inspired the character of Scott Burke in "Santa Slept Here"? How do you come up with character names?

Someone once said “We are the heroes of our own stories.” I had that in mind when I created the Scott Burke character, because he’s a lot like me. Then again, Nick Seven and Vic Fallon share a lot of my character traits and preferences, too. I try to devise names that are catchy and unique, and haven’t been overused. When I created Nick Seven, I wanted a distinctive last name that wouldn’t draw an instant mental image, like Eastwood, Savalas, or Columbo. The name Vic Fallon is a hybrid from the classic James Cagney gangster movie “White Heat.” There’s a supporting character, an undercover cop named Hank Fallon, masquerading as Vic Pardo. I thought the names Vic and Fallon sounded good together.

Which of your characters would you want to go out on a date with?

Tough choice, but I’d have to say Felicia, the co-star of the Nick Seven spy thriller series. Felicia is from Barbados, she’s very self-sufficient, witty, gorgeous, and she’s sex on two feet. When I devised the character, I didn’t want a damsel in distress for Nick to rescue in each story. I wanted a female partner who is his equal, one who is tough but resourceful, and can kick ass with the best of them. The fact that she and Nick are crazy about each other makes their relationship easy to write.

What are some author milestones you've achieved so far? What more do you hope to achieve in ten years’ time?

I’ve had a few memorable events since I started this odyssey into insanity. One was being the keynote speaker at the Indianapolis Book Festival several years ago. Another was a week-long book signing tour I did in the Florida Keys. Appearing at an author event with one of my favorite writers, Tim Dorsey, was also a high point. I hope that one of my books catches the attention of a filmmaker, because I think my stories would work very well in that medium.

What are your top five marketing and writing tips that you would like to share with the young writers?

One: When you introduce a new character, even a minor one, include a brief physical description to give the reader something to visualize. Two: When you’re ready to promote, look for free opportunities, such as blogs that need guest writers to fill space. Three: Don’t take your editor’s comments and corrections personally. Their goal is to help you make a better product. Four: Be careful where you spend your marketing bucks. If you purchase a promotional package, research the company to see what others have experienced. Five: Don’t make the mistake of thinking that the world will embrace your book as the next big thing to hit literature. You’ll be disappointed.

What are you currently working on? When can we expect the release of your next book?

I’m currently finishing my summer beach read, which should be out in June or July. I’m also working on the next Nick Seven thriller novel, to be released later this year. I’ve already completed the rough draft on this year’s Christmas romance as well.

Lastly, how would you rate your experience with AllAuthor so far? Could you pinpoint some things you really like or dislike?

My experience with AllAuthor has been very good so far. It’s gotten me some good exposure, and I’ve picked up some followers. I like the set-up on the profile page, and the various media sites it’s linked up with. There are a lot of good resources available, too.

Have brimming questions to ask author Tim Smith? Ask whatever you like, but keep it appropriate.
** Please note that unanswered questions will not appear on the page. Refrain from posting promotional messages.

The author, a good book and you! Contact Tim Smith here.
** Please refrain from spamming and don’t bombard the author with promotional mails/messages. Your IP/Email address may be blocked if found doing so.