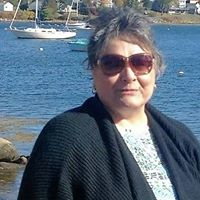 I am an Amazon bestselling author who writes smut with a plot.

I was born in Maine but I live in Florida where I grew up, went to school, married and raised a daughter. A few years ago I retired from Disney to spend time with family, travel and write. 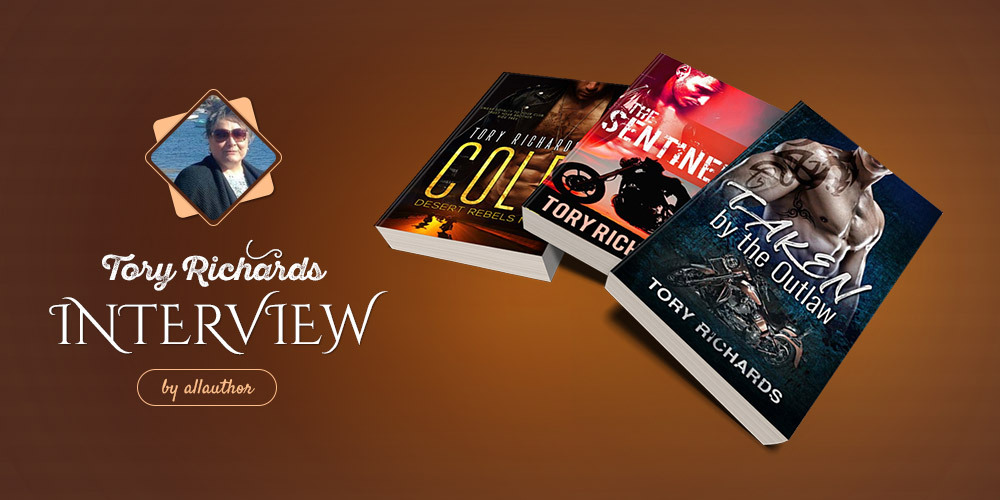 "Tory Richards was born in Maine but grew up mostly in Florida. The very first story she got published was 14 years ago, with Whiskey Creek Press titled Cupid's Arrow. The author began writing the Nomad Outlaws Trilogy in 2016. She writes for herself. It's always been a hobby."
Could you tell us a little about where you grew up and what your childhood was like?

I was born in Maine but grew up mostly in Florida, attending middle school and high school there. I hated school with a passion and skipped with friends when I could. I had a good childhood for the most part. Both my parents worked and my sister and I never went without.

What was the first story you ever wrote and did you ever publish it? If not, do you think you'll ever revisit the idea and try to mold it into something new?

The very first story I got published was 14 years ago, with Whiskey Creek Press. titled Cupid's Arrow. When I got the rights back I titled it The Kiss and gave it a new cover. I do have a box filled with typed romances I wrote 30-40 years ago, the pages so faded I doubt I'd be able to read them now. Can't bare to part with them but doubt I'll do anything with them.

Who or what first got you interested in the romance genre?

When did you start writing the Nomad Outlaws Trilogy? What is an important lesson that writing this series has taught you?

The heroes in the Nomad Outlaws Trilogy were actually minor characters in other MC romances I'd written. Rebel, in Ruthless actually made his first appearance in Wild Marauders MC. Anyway, as time went on and he appeared in other books I decided to give him his own story. I began writing the series in 2016. The important lesson in writing any series is having a good cheat sheet to fall back on.

If you could describe your book "Taken by the Outlaw" in three words, what would they be?

Who is one of your favorite characters you've ever written and why?

I can't pick one or even two. All of my characters have a special place in my heart. I created them.

If "Wild Marauders MC: Lynch" were to be made into a movie, which actor would you want to play the part of Kat? What about Lynch?

Lynch? Hands down Christ Hemsworth! I'd like to see Blake Lively as Kat.

How do you decide the names, appearance, characteristics, etc, of your characters?

A lot has to do with the kind of character I'm writing, and how he/she has lived up until then. Sometimes I'll google images for certain types of male or female and use a description from there. I've pulled up name sites before when I needed help coming up with a name. I've actually bought book covers first and then written a character based on what they look like on the cover.

Where did you get your inspiration for the Phantom Riders MC Trilogy? Tell us a little about the first book in the series and how it paved the way for the rest of the books.

I didn't plan on writing a trilogy when I wrote Phantom Riders MC - Hawk. The story for Hawk came when he made an appearance in Dark Menace MC. As for paving the way for No Mercy and What He Wants that was a piece of cake. It was the first time I realized how easy it was writing a series once I wrote the first book because I'd already laid out all the ground work. Up until then my mentality was once I was done with a book I was done and moved on.

What does literary success look like to you? Do you think you have achieved it after being an Amazon bestselling author?

I write for me. It's always been a hobby. I'm not going to lie and say I don't like the royalty checks, but I've never had any expectations about my writing. Except for one book convention in 2009 I don't go to them. I don't do book signings. I write because it's not a job for me. As for being an Amazon bestselling author? From my understanding Amazon updates their site every hour, and new books are being published every hour so being a bestselling author only lasts as long as it takes for another author's book to bump you past the 100 mark. Still, it's nice to be able to say I'm an Amazon bestselling author for a little while, and I have my readers to thank for that.

Writing and finishing a series can take an immense amount of discipline. How do you keep yourself motivated and keep the dreaded writer's block from attacking?

I don't. I am probably the most undisciplined author you'll ever meet. I don't keep to a schedule, or deadline. The only exception is if I've set up a pre-order. Remember, writing is a hobby and I write for me. I don't like to put that kind of stress on me. I've had writer's block before and it sucks but I usually have several projects going at the same time. If that doesn't keep me going I take a break.

Have you ever written a character that you hate?

When and why did you decide to retire from Disney?

I left Disney in 2011 because it was time. I'd worked some 40 years, not all there, and had a lot going on in my personal life at the time. New grandbabies, writing, an ailing soulmate. He passed shortly after I retired. It was hard not working in the beginning because I felt guilty but now I enjoy my free time.

Which is your next book to be published? Tell us what it is about.

LD, book 3 with my Desert Rebels MC Series. LD is the president of a new MC chapter started up in Las Vegas. While he builds up the new clubhouse, and runs the construction business he has to deal with rival clubs, and a woman who's determined to thaw his heart. Blurb - She was no southern bell. She was a fucking goddess. Men would go to their death willingly just for a taste of her. To see if the reality lived up to the fantasy. But I wasn't a man. I was a fucking monster. And her interest in me was going to be her ruin. The only thing I gave a damn about was my club, and killing. And I was going to show her just how fucking dangerous I could become.

I haven't used every feature yet but what I have I like. The cover contest because it gives me another avenue of showcasing my books. The magic tool where I can create my own graphics. The mock promo graphics AllAuthor sends each week on my featured book. The tweets of my featured book, the price for a feature isn't bad either. So far I haven't found anything I don't like.