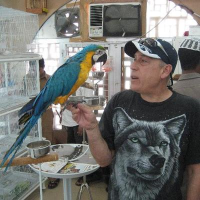 Paul Zunckel was born in 1957 in Zimbabwe, then known as Rhodesia. His family moved to South Africa in 1966, where he completed his schooling at Kingsway Senior High School in Amanzimtoti.

He did his two years National service in the South African Defence Force as an Ops Medic, wanting to follow his heart and study medicine, but life got in the way.

Paul was employed in Air Traffic Control for twenty years, and has been involved in Management positions for over twenty-five years. He has a Human Resource Management Diploma, and is an accredited Facilitator.

He started to write full time in August 2014, about something that is close to his heart... Africa. The mysteries, the superstitions, and all the beauty and treachery of the land. He holds his wife responsible for the road he is now traveling, as she was the driving force behind him in his Debut novel, Blood Moon over Africa. Since then, the stories line up to be told.

Paul loves to write as it takes him into another world, and he enjoys the reaction that he receives from readers.

Apart from writing novels, he also plays the guitar and writes his own material, although he is unable to read music. Music forms a big part of his life, and he can lay claim to having cut one CD, although he does say, “I’m too old to be an idol.”

He has two children from a previous marriage, and has been married to Lucie, the love of his life, for the last fourteen years. Paul and his family live in the Eastern Cape, South Africa along with man’s best friend, a cross Alsatian/Lab who answers to the name “Pooch” and is at his feet every time he sits down to write and will not move until “his human” is finished and types The End.

Have brimming questions to ask author Paul Zunckel? Ask the author whatever you like, but keep in the appropriate zone.
** Please note, unanswered questions will not appear on the page and refrain from posting promotional messages.

The author, a good book and you. Contact Paul Zunckel here.
** No Spamming: Spam is an irritant to regular users or the authors. Please note that bombarding promotional mails/messages is strictly prohibited. Your IP address may be blocked if found doing so.