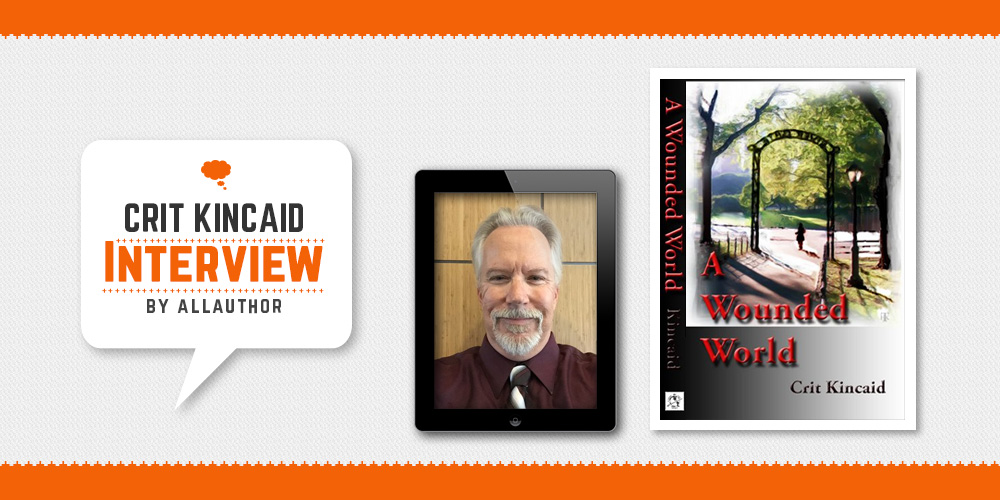 Tell us a little bit about Tucson, AZ, where you were raised. What would you say is the best thing to eat from your hometown?

Tucson is 73 miles from the Mexican border, not to mention right between El Paso and San Diego. We have some of the best Mexican food.

Was writing and publishing something you always actively pursued? Who were some major influences in your early life?

I have an early, childhood memory of sitting in the closet, which we used for a library, surrounded by books and trying to pound on the keys of an ancient Royal typewriter. Years later I graduated from the University of AZ with a Liberal Arts degree in Creative Writing. Then life sort of took over and I let the writing drift to the back burner. It wasn’t until I turned 50 that I seemed to find the voice and ambition again, and A Wounded World was my answer.

Major influences, that is a hard one. There was a writing teacher who, at the beginning of every critique, would ask “Why should I care about what happened to your main character.” Without realizing it, I’ve spent a life time searching for the answer.

When and why did you start your own personal imprint? What are your views on traditional publishing vs. self publishing?

I first sent my book out to about 50 agencies, even though I knew that first novels are generally expected to be between 65 and 85 K words. A Wounded World was 108 K and nothing in my submission letter convinced anyone to take a second look. So, after the 50 th thanks but no thanks, I took the Indie route and self-published. I went the whole way, with my own imprint, bought my own ISBN numbers, and used Amazon to distribute only.

Both ways have their pros and cons. With traditional publishing there can be less creative freedom (until you achieve the power of a best seller), less return for your efforts, yet a whole organization to help you get your book out there and sell more units. The Indie way allows total creative freedom, so greater risk and greater opportunity for greater return, but selling is totally on you. At times I almost feel as if I meet every one of my readers.

There have been some very successful Indie writers, and traditional doesn’t necessarily guarantee success. If you do go the indie route, be patient, keep writing and putting your books out, and build up your readership.

What was it like writing A Wounded World? What were some things you learnt about yourself and about authors when you wrote this book?

For years I thought I had to be a planner and outliner type of writer and never seemed to get anywhere. A Wounded World was totally a seat of the pants written book. I had a character and an idea of an ending. I started on page one and wrote, never looking back. When I was done with one draft, I turned back to page one and started again. Who needs an outline?

I also came to realize that I wasn’t dealing very well with emotion, literature wise or personally in life. So, I decided that whenever I hit an emotional point, rather than letting myself turn away, I would turn into the emotion and build it. I worried that I might be creating melodrama. But doing this I learned my answer to that question from my writing teacher. You should care about what happens to my main character because I care. I shouldn’t expect you to cry, unless I cry.

Where did you get the idea for this book? Have any of the characters or situations in this book been inspired by real life people/events?

Everything comes from life, really. As we grow and age, we collect characters, experiences and plots. And I think the storyteller is innate in all of us, yet there are only a few of us willing to spend the time, a lot of time, sitting at a computer dreaming it all on paper. Writers are much like actors, taking their own emotions and experiences and amplifying them for the drama. Normal, my main character in A Wounded World, is part of me and everyone else who have lived through tragedy.

Which phrase in this book are you most proud of? Why?

“Forgiving leads to closure, closure leads to peace of mind.” A Wounded World is very much about forgiving, forgiving a world that seem to take more than it gives back, forgiving others, and forgiving oneself.

The other quote would be about love. “Being in love means a person is willing to take responsibility for another, helping them protect and achieve their hopes and dreams, and taking care of them physically, emotionally, and spiritually.” A Wounded World is also about love healing wounds.

You have a line in the book that states: "'The living should not haunt the dead". Do you have any advice to readers out there that may be grieving over a loss on how to move on and not let the past haunt them?

That is a difficult question to answer because dealing with death is a very individual thing. In my book I have two characters reacting quite differently, one hides from the world and his own memories. But the problem with denying the past, you are denying the future as well. My other character believes that no one is truly dead unless they are forgotten. I guess the trick is to not dwell on the death, while celebrating and remembering the life.

Prior to this, have there been any books that you tried but failed to get published? Are you working on anything new now? If so, could you tell what it's about?

Every writer has a shelf full of false starts and unsuccessful efforts. Every writer is working on something new. Yes, I am working on a new novel. At the moment it seems to be about a man diagnosed with Parkinson’s Disease reconnecting with his family. But, as I write about the characters and work through who they are and what drives them, that could change.

What are some of the best and worst parts about being an author, according to you?

The best part is creating something of substance that can connect with someone. The one thing about being an Indie writer is that I actually get to interact with many of my readers.

The worst part is dealing with the inner critic, that nasty little nagging troll inside you making you doubt every word and decision.

Have you ever gone on a book tour? If so, how was it? If not, are you planning on setting up a book tour anytime soon?

No, I’ve never been on a book tour.

Clearly, with my sales, I am not one to hand out marketing tips. I’ve used social media to death; amazon, face book, and twitter promos. The best marketing strategy is probably writing high concept stories that attract readers. I somehow got into the relevant and sensitive stories that is hard to sell. Another strategy, a little easier to do, is to keep writing and producing books. The more books, the more chance for diverse readers.

What do you think of book piracy? Do you know anyone who's fallen prey to this crime?

Hate it, it’s like a cancer in the industry. Yes, I know many people who have fallen prey to piracy, probably far more than many realize. I wouldn’t be surprised to find that my book has been pirated.

Do you prefer to write with a pen, typewriter, or computer?

I’ve been diagnosed with Parkinson’s Disease and one of the symptoms is micrographia, which is small and cramped hand writing. So, writing with a pen is problematic, so I do all my writing on my laptop. I started my writing career writing on an IBM Selectric typewriter. I almost think that every modern writer, if they haven’t already, should try writing a full, multi-draft novel on a typewriter. Just to get a taste of how it was for every writer that came before them. I definitely prefer a laptop and a wifi printer.

Growing up in Tucson, AZ, author Crit Kincaid remembers eating some of the best Mexican food. As a kid, Crit would sit in the closet, surrounded by books, pounding away at an ancient Royal typewriter. He graduated from the University of AZ with a Liberal Arts degree in Creative Writing, but it wasn’t until 50 that he found the voice and ambition to write again. After writing A Wounded World and being turned down by a lot of publishers due to its length, he took the Indie route and self-published, which allowed total creative freedom. He is now working on a new novel about a man diagnosed with Parkinson’s Disease reconnecting with his family. It is more personal as Crit struggles with Parkinson’s himself. 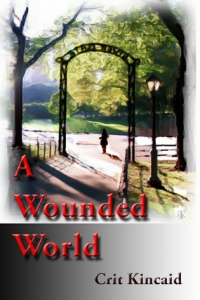