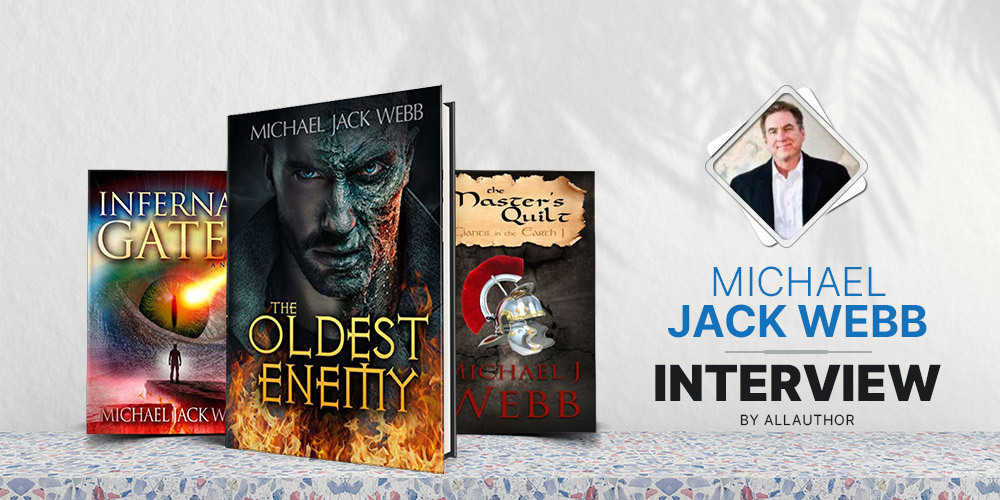 What are some of your favorite childhood memories?

The block I grew up on was full of kids my age. Several of us got together and put on plays for the other kids. We loved writing and performing dramatic and fun plays about Kings and Queens, Princes and Princesses, Dragons and other enemies of the kingdom. We built a small stage in a friend’s garage, made a curtain, and used a record player for music. We told exciting stories and had a great deal of fun living in the world of fantasy. I also built a tree fort in one of the large trees in our backyard, sold lemonade in the summer from a small stand I built, and always loved to go fishing at the Pier or at my grandfather’s lake in Central Florida.

How did you begin writing your first book?

I started thinking about writing novels as a career in my late twenties but didn’t begin working at the craft regularly until 1984. I spent the next six years researching and writing a novel that was longer than Moby Dick, War and Peace, or Atlas Shrugged. When I finished it, I proudly sent it off to an agent and received an eight page, single- spaced, typed rejection letter. I had to pay this NY Agent a fee to read the darn thing, so the rejection letter cost me a little less than $100/page. Anyway, that attempt at “The Great American Novel” eventually became a trilogy. The Master’s Quilt, The Nephilim Parchments, and Song of the Seraphim.

In what ways do you think of graduating from the University of Florida with a BA degree in History and American Studies has helped you shape into a writer?

My educational background provided the foundation for lifelong study with a variety of interests. I was in college in the very early seventies and was exposed to a diversity of ideas, thoughts, and perspectives from my professors and peers. I had one notable professor who introduced me to critical thinking and the importance examining and dissecting ideas from multiple viewpoints. His mentoring has helped me immeasurably, not only in my writing, but in my life as well.

Over the past forty years, you have traveled the world in search of adventure. What is the most adventurous thing you have done to date?

Mountain climbing was a big part of my life until I got married. I’ve climbed several fourteeners in Colorado and Washington State, a couple in the Swiss Alps, and climbed on the Matterhorn.

What do you find fascinating about the intersection of the supernatural, the historical, the scientific, and the Judeo-Christian worldviews?

The most interesting thing to me is how intricately intertwined they are. The more I research the supernatural, the more I discover how much science can be used to verify and explain the fantastical. Take light, for instance. It’s a fascinating subject. Historically, from Da Vinci to the Renaissance, to present day, artists have been fascinated with light. Science, too, has been intrigued by light and its properties. Think about advances in the past few years in laser technology. We use light for everything from lighting our homes and business, to dentistry, to photocopying, and on and on. The Bible tells us the very first thing God created was Light. I believe there’s evidence in Scripture, in ancient Talmudic writings, and other sources, that mankind was created out of light. Science is only now catching up and understanding that light is the foundation of both the seen and unseen universe. As we learn more about the nature of light we’re going to learn more about who we are, where we’re going, and what we’ll find when we get there. Along the way, we should be prepared to have our ideas about the universe and our role in it shaken to the point of awakening us to our manifest destiny. To quote Buzz Lightyear, “To Infinity and Beyond . . . .”

What inspired you to write "The Master's Quilt"? Did you expect it to become a best-seller?

Can’t say I expected The Master’s Quilt to become a bestseller, but I hoped it would. As for my inspiration, I was studying biblical history and had always been a huge fan of the movie Ben Hur. I love ancient and modern history, especially as it focuses on Israel and Middle East. I wanted to write a historical/political thriller with supernatural overtones and weave in some of my own extraordinary supernatural encounters over the years. At the time, there really wasn’t anything out there like that. Two years after I started researching and writing what became the Giants in the Earth trilogy, Frank Peretti published This Present Darkness. It became a 2.5 million copy bestseller. I knew I was on to something, but it took me five more years to complete and get published by the same publisher who published Peretti. Ironically, it wasn’t until years later, after I regained the rights and published it as an e-book, that it became a bestseller. A very long process, but worth the wait!

Who is your favorite character in the Giants in the Earth series? Who was the inspiration for this character?

Deucalion Quinctus, the Praetorian Commander in The Master’s Quilt. He’s a combination of Charlton Heston’s character in Ben Hur, a Centurion from ancient Rome, and an ordinary man caught up in extraordinary circumstances.

Infernal Gates is one well researched and well-constructed story. How much did you research while writing this book?

Spent years doing the research and compiling info from a number of eclectic sources. I’m a voracious reader and fascinated by several disciplines, including physics and the study of light, archaeology, paleontology, astronomy and astrophysics, forbidden history, the origin of demons and their impact on mankind throughout the ages, and the interaction of angels in human affairs. I also did quite a bit of geographical research for the locations. Everything in my novels has significance, down to the names of characters, the location settings, and the historical references. I want my readers to come away feeling as if they’ve eaten a ten- course meal when they finish one of my stories.

How do you make supernatural thrillers like The Oldest Enemy believable for readers?

I take the extraordinary and weave it into the context of real-life experiences. I work hard at imagining how people who encounter things they can’t explain or things that disrupt their world view respond to the unbelievable. Many of the things I write about in The Oldest Enemy happened to me or others I know. I exaggerate or expand the experiences a bit for novelistic purposes, but much of what happens in all of my novels is based upon life experiences or anecdotal testimonies of events that have been experienced by others.

Why did you choose to write in the thriller/suspense genre? Do you wish to write in some other genre?

I write what I enjoy reading. It was also the best genre to tell the stories I want to tell. I’ve always wanted to write a sequel to Ben Hur and I’m working on a serial-murder mystery with supernatural elements.

What does Michael Jack Webb's Saturday look like? What are some things you enjoy doing in your free time?

If we aren’t travelling, my wife and I enjoy movies, discovering new restaurants (we’re foodies), and spending time together doing whatever strikes our fancy.

Have had plenty of writer’s block over the years. My recipe for the cure is soft chocolate chip cookies, a cup of hot tea and cream, and lots of prayer. As for motivation, there always comes a point in my writing where my characters become alive. When that happens, I’m simply a scribe writing what they’re experiencing. I can’t wait to find out what happens to them next, so I’m compelled to finish their stories.

When you're not writing, what are some things you like to do for fun? Do you consider writing as more of a hobby or a job?

Writing is more than a hobby but less than a profession at this point. I hope to retire soon from my day job and build a small ranch in Jackson, WY, where I plan on writing more and travelling more. Reading and Travelling are my passions. I am also a big movie buff but prefer the classic films to what’s being made today. I get a lot of inspiration for dialogue and fight scenes from films.

What are you currently working on? When can we expect your next book?

I’m finishing Devils’ Cauldron, the sequel to Infernal Gates. Hope to have that published by summer. I’m also writing my next thriller, working title Ghost Hunter, which I hope to bring out next year. I’m also outlining and researching the third and final book featuring Ethan Freeman and Sam Weaver, Light Bringer. Not certain when that will be out, but it looks like it will be late 2022. After that, I have plans for a novel about a dragon hunter set in the middle ages. I’ve also drafted an idea for a series of six to seven interconnected historical/thriller/supernatural novels about a character based loosely upon the legend of the mythical “Wandering Jew.” The man who taunted Jesus on the way to the Crucifixion and was cursed to walk the earth until the Second Coming.

When were you first introduced to AllAuthor and how? What were your expectations coming in and did the website manage to meet them?

A fellow author and friend, Lorilyn Roberts, asked me to vote for her book cover a couple of months ago. I signed up then. Didn’t really expect anything but liked what I saw and decided to sign up.

Michael Webb is good at telling stories. He has a flair for creating interesting and unusual plots and flawed characters who come alive as you read his thrillers. Webb’s writing plunges you into the world of the supernatural and makes you think twice about what might be lurking in the shadows. 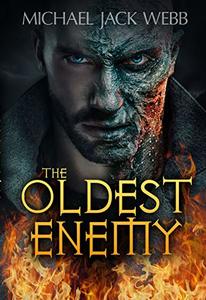 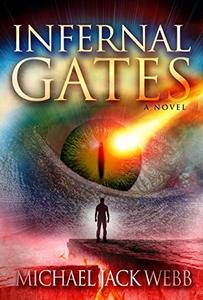 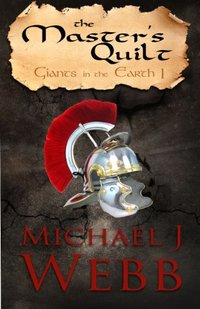 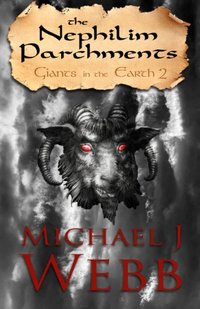 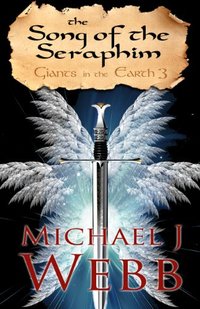