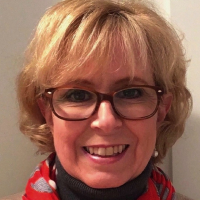 Amy Metz is the author of the Goose Pimple Junction mystery series. She is a former first grade teacher and the mother of two grown sons. When not writing, enjoying her family, or surfing Pinterest and Facebook, Amy can usually be found with a mixing spoon, camera, or book in one hand and a glass of sweet tea in the other. Amy loves unique Southern phrases, cupcakes, and a good mystery. She lives in Louisville, Kentucky. 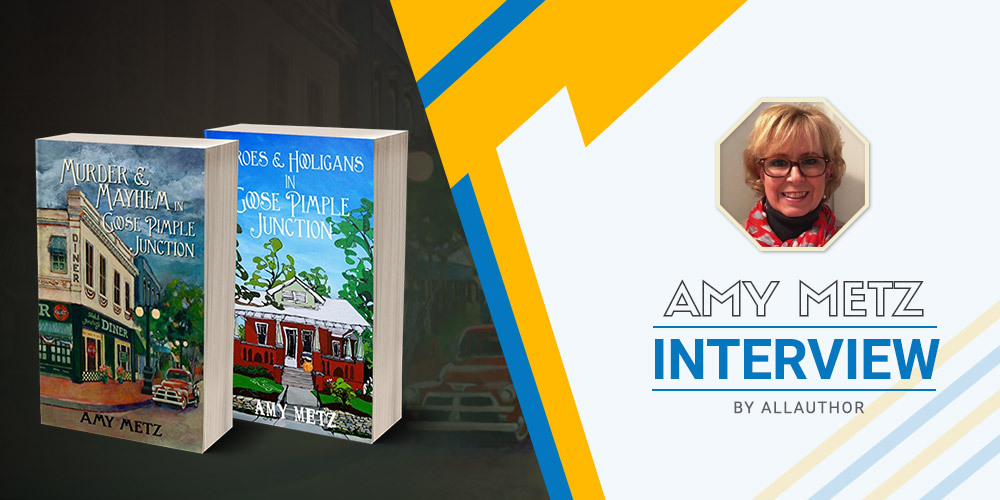 "Amy Metz has a delightfully amusing writing style. Her cozy mysteries are full of humorous places and character names and humorous descriptions. In The Goose Pimple Junction Mystery Series, Amy Metz uses her knowledge of Goose Pimple Junction to spin a tale based on a true story that's never been solved. She is working on Wax Man, a psychological thriller about a serial killer."
Which city or town did you grow up in? Where did you go to college and what was your major?

I grew up in Louisville, Kentucky. Except for college and a few years after that, I’ve lived in Louisville since first grade. I went to Centre College in Danville, Kentucky and transferred to/graduated from the University of Kentucky, with a major in elementary education.

How did your childhood shaped your passion for writing? What inspired you finally pen down your first story?

I grew up hearing my dad talk about two family members who were murdered in the 1930s. I was always fascinated by the stories, and I remember thinking someone should write a book about them. So I guess family history and my dad’s storytelling ability inspired me.

How has been your experience of being a former first grade teacher?

I taught for three years before my first son was born. I resigned to become a full-time mom. I'm glad I had the experience in the classroom, but I'm also glad I quit to be a mom.

How did you begin writing the Goose Pimple Junction mystery series?

Writing was therapeutic for me when my mother was diagnosed with dementia. She was extremely independent, so she fought my role as her caretaker with an unflinching fierceness. I started writing as a form of therapy and because I thought maybe someone could learn from what we were going through. But living it and going home and writing about it was like wrapping myself in stress. I needed to laugh, and I needed an escape from real life, so I decided to write a humorous mystery—remembering my dad’s stories of the 1930s murders of family members. The murders aren’t funny but the fictional townspeople are. The story is set in a quirky little town with colorful characters.

What do you love the most about unique Southern phrases?

They make the mundane interesting and fun. I mean, saying, “Get your straw out of my Kool-aid” is much more fun than saying “Mind your own business.” And a phrase like, “If it has tires or testicles, it’s gonna give you trouble” adds humor but gets the point across.

Some phrases give good advice in an interesting way. Instead of saying “Stop that, it won’t work” it’s more interesting to say, “You gotta stop watering dead plants.”

When somebody is slow to catch on to what you’re saying, it’s much more fun to say, “He wasn't hooked up right” instead of “He’s dumb.”

Answering “Fine” to “How are you” is much less colorful than to say, “I’m hanging in there like loose teeth” or “If I were doing any better I’d have to be twins.”

You can soften criticism by saying “That’s a critical looking woman” instead of “She’s unattractive.”

I could go on and on. I started with a few phrases I’d heard my dad and granddad say, and my list has grown. It’s so long now I think I need to write a book about Southern phrases.

They make life interesting and they make me laugh!

What is the hardest thing about writing mystery?

I think the hardest thing is making the ending a surprise—keeping the reader guessing whodunit until the very end. You have to leave clues along the way, but you can’t leave so many clues that it’s obvious who the bad guy is. It can be tough to find a balance.

What was your inspiration behind writing Murder & Mayhem in Goose Pimple Junction?

As I said, since childhood I thought someone should write a book about the 1930s murders of family members. I was always sad that one of them was never solved, so I used it as the basis for the first book. And I solved it fictionally.

There are so many mystery writers out there. How do you ensure that your stories are exclusive and not like any other mainstream mystery novel?

Who was it who said there are no new stories, just different ways of telling them? I think that’s probably true to some degree. Authors use different settings, different characters, and their own voices to tell a story. The characters, what they say, and how they react to situations come from an author’s experiences and imagination. It’s up to the author to make a book different than others in the genre. With the Goose Pimple Junction series, I think the characters, the setting, and the Southern phrases make it unique.

Who inspired the character of Caledonia Culpepper in Rogues & Rascals in Goose Pimple Junction?

That’s a really good question. I think Reese Witherspoon’s character in Legally Blonde was probably one inspiration for Caledonia. I’m sure she has other traits from people I saw on TV or in a movie or read about, or even from my own life, but she just kind of told me who she was and I listened to her.

How difficult it is to write five short stories and one novella compilation? Who inspired the characters in Short & Tall Tales in Goose Pimple Junction?

Some of the characters in Short & Tall Tales are real and some are fictional. I mentioned the murders my dad told me about, but he also told me a lot of stories about family members and about the little town he grew up in. (They did, and still do, have an Apple Day every year.) I guess the book combines fact and fiction. Some of the short stories are those stories from my dad and some are about characters from books 1 and 2—I wanted to give a little more information about some of them: How did Jack & Tess become engaged? How did Johnny become the chief of police? How did Martha Maye's and Johnny's romance start?

In the novella, my mother was the inspiration for Ima Jean. She was never kidnapped, but she did run into a con man like the one in the story. It was fun to have him fictionally get his just desserts. And a little bricked up room that was found in a friend’s basement was the inspiration for the hidden room. Short & Tall Tales is the 3rd book published in the series, but chronologically the events occur between the first and second books.  It's not vital to read book 3 to understand the series, but it provides a little extra background for the reader.

What is the one message you would like to give the youth of the world?

Be kind. And sometimes the best gift you can give someone is to include them.

How do you ensure that you continue to enjoy writing and that it does not become work or a job?

I’ve never subscribed to the belief that writers have to write every day. I write when the ideas are flowing or when my characters are talking to me. That keeps it fresh and exciting. On those days, writing is really fun. I do think that the editing and marketing phases of getting a book published definitely feel like work. But it’s part of the process.

If you weren't a writer, what else do you think you could've done for a living?

Now that I’m too old to learn new tricks, I often wish I’d gone to school to become a graphic artist, or a photographer, or a baker. Those things interest me. But the job of Mom was all I ever wanted to be. It was the ideal job for me. Now writing is the ideal job.

Which is the next book you are working on? What is its genre?

I’m working on Wax Man, a psychological thriller about a serial killer. It will be a definite change of pace from Goose Pimple Junction.

What was your first impression of AllAuthor? Have your thoughts changed much since?

AllAuthor is such an asset for indie authors. Getting our books out there to readers can be challenging. AllAuthor’s support is invaluable along with the many services offered: the review gif maker, the promotional book banners, the Magic Tool (where you can design your own 3D book promos), the tweets and retweets . . . it’s all such a help and I’m grateful. At first I was hesitant because of the membership fee, but I'm glad I became a member.