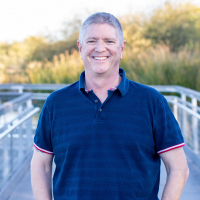 Brett Humphrey is the author of the Dragonborn series, Tionchar Tales series and the Therian Shapeshifter Academy series, as well as various comedic sketches, plays and many other stories he hasn't written—yet.

He has worked with children and families for over thirty years and has taught in the United States and countries around the world. His passion for reading started when he was a young child and he is still an avid reader of both fiction and non-fiction. His greatest desire as an author is to create books parents will want to read to their children, hopefully using different voices for the characters.

Brett lives in Arizona with his patient and supportive wife, who encouraged him to finally sit down and write one of the stories that live in his head.

"Brett Humphrey grew up in the city of Orange in Southern California, USA. He wrote a lot of stories when he was a child. He has worked as an educator as well as a children's pastor. He writes adventure/fantasy books for kids, middle school & YA. He is constantly trying to improve his own writing and with every published novel, he gains hundreds of forever fans."
Which city or town did you grow up in?

I grew up in the city of Orange in Southern California, USA.

How did you begin writing your first story? Did it ever get published?

I wrote a lot of stories when I was a child but never did anything with them other than sharing them with my parents. I decided to write a book to publish in early 2019 and I began writing Awakening which I published in December 2019.

How was your passion for reading started when you were a young child?

My parents used to read to me when I was a child and my dad would use different voices for the characters. That began a love for reading at an early age. I used to love ordering books in the classroom through the Scholastic Book Fair program and would devour books. When I was in fifth grade, our class held a competition to see who could read the most book pages during the year. While the majority of the students read hundreds of pages, another student and I read thousands of pages during the school year.

How has been your experience of working with children and families for thirty years?

I have worked as an educator as well as a children's pastor and I loved the opportunity to teach children at their level. When I was a classroom teacher, I would read to my students every day and use voices for each of the characters. This was a highlight for my students each day.

How did your wife encourage you to finally sit down and write one of the stories that lived in your head?

She gave me the time I needed to make it happen. Our children are adults so sitting down to write, after working all day at my full-time job, she gave me space and time to write each night. I would also take time each morning to sit for an hour at the local Starbucks to write before work. She is also one of my Beta Readers and gives me honest feedback on the stories I write.

Which book took the longest to write in the Dragonborn Series?

Awakening took me the longest to write because I hadn't written anything for a very long time.

Who inspired the character of Alister Drake in "Awakening"?

The first person who comes to mind is Aragorn from The Lord of the Rings. I wanted Alister to be someone who would stand up for those weaker than himself. I also wanted someone who could maintain his personality and humor even when faced with such radical changes.

What is one message that you try to impart through your books?

Everyone can do something to stand up for what and protect the weak.

How important do you think a book title is? What are your tips for penning a catchy and intriguing book title?

I am intrigued by a book when a title catches my eye, so I believe it is very important. I try to sum up the main message/theme in the book and use that in my title.

Is there anything from the past you wish you could do differently? What is it about?

I took a creative writing course in college because I was excited about reading, but at the end of the course, I decided I couldn't write books so I stopped trying. The professor wasn't encouraging as much as had his opinion on what types of stories should be written (Hemingway, Steinbeck, etc.). If I could, I would go back to my younger self and tell myself to write stories that I want to read because there are always other people who like those stories too.

Which is your favorite character from the book, Return: Dragonborn Series, Book Two? Why?

Mkali Kentauro. When I first wrote the character of Mkali, I thought she would show up for a paragraph or two and then fade into the background. Instead, I fell in love with her spirit and willingness to stand up for others. As I wrote more of her story, I was impressed with her as a person and how she faced racial discrimination while she lived on Earth but didn't let that stop her from standing up for others. Her name means "Fierce" in Swahili and she is a fierce character. I loved her so much she appears in books three and Four and I gave Mkali her own series. Book One is called Fierce Protector.

In what ways do you try to better understand the craft of writing?

I read, a lot. I average 1-2 books per week and I am constantly trying to improve my own writing.

I have started another new series with Cyndi the mermaid as the main character. The first book is called Scales of Justice and it takes place on Earth. It is still set in the Dragonborn Universe, just as Fierce Protector is, and you will see Alister, Aileene, Bernie and Shelley show up in these books as well. Cyndi lives in Newport Beach, California, and owns a party business specializing in mermaids for birthday parties, but she also works to take down evil people on Earth. She works for a secret organization of shifters on Earth and works directly for King Alister. It has action, adventure, magic, and mermaids.

I am currently working on Scales of Justice, after that, I will work on Winter, Dragonborn Book Five then Fierce Opposition, Therian Shapeshifter Academy Book Two.

How has AllAuthor helped you to promote your books? How has been your experience working with us?

All Author has helped by tweeting, writing reviews, giving me tools for book promotion, artwork and a network to draw from. I have had great experience working with All Author.

Have brimming questions to ask author Brett Humphrey? Ask the author whatever you like, but keep in the appropriate zone.
** Please note, unanswered questions will not appear on the page and refrain from posting promotional messages.

The author, a good book and you! Contact Brett Humphrey here.
** Please refrain from spamming and don't bombard the author with promotional mails/messages. Your IP/Email address may be blocked if found doing so.