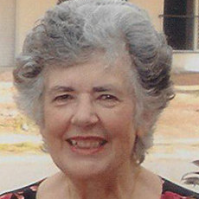 I love to write, edit and self-publish now that I'm retired; it's a time-consuming hobby, but great fun. I have thirteen grandchildren and one great-granddaughter, enjoy gardening, walking, my friends, my church community and going on holidays. Oh, yes, my dear Maltese Terrier died last year, but I have three goldfish. 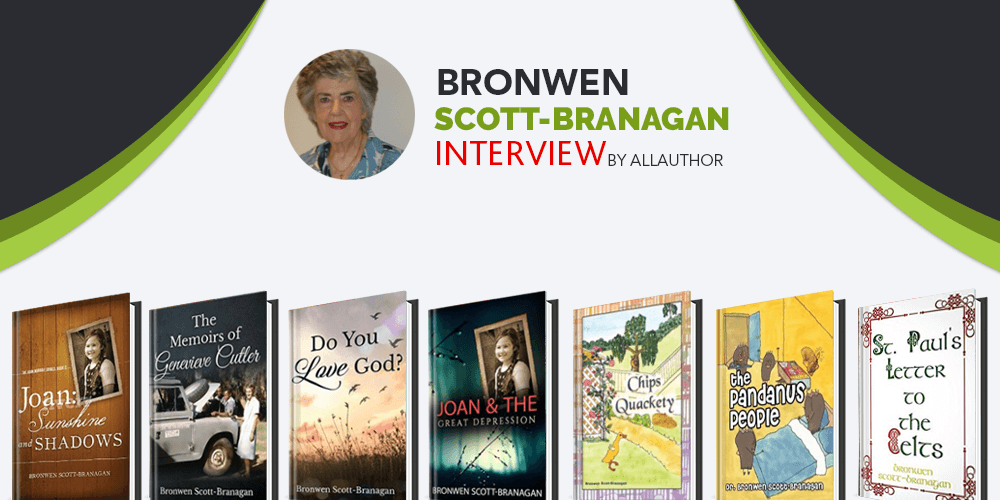 "Author Bronwen Scott-Branagan has led a full life, flitting to and from different countries and cultures with her family. Her mother and teacher were always very supportive of her writing, and from a young age, she was already writing as a 'Sunbeam' for The Sun, a Melbourne newspaper. Bronwen penned her popular "Joan" series based on her own childhood and experiences with The Great Depression. "The Memoirs of Genevieve Cutler" was inspired by a woman named Genevieve that she met through the Mothers' Union Group. She likes to write and paint early in the morning, as it is the most peaceful and interruption-free time of the day, and keeps a pad and pen next to her bedside as ideas often pop into her head in the middle of the night. Although she keeps her reader's interests and wants in mind, she usually prefers to write what is most interesting or fun."
You have had quite a full life (with thirteen grandchildren and one GREAT-granddaughter) What do you think is one crucial lesson that you've learned that only comes with age?

Just take one day at a time. My late husband, our children and I have lived in a number of different countries and cultures and there has been so much to learn from the friends we made in those places. The last place before we retired was Taiwan, where I was an Associate Professor at a large university.

Who is Genevieve Cutler and what inspired you to write her story?

Some time ago, I think because I had been a Christian missionary, the Mothers’ Union group I attend asked me if I would interview Genevieve at one of our meetings. She gave me several boxes of diaries and photographs and over the course of several months I wrote and then visited her and read to her what I had written for her comments. I enjoyed doing this and the interview was such a success that I decided to put the notes together and write the book. The launch was just after her 96th birthday and it was a delight to see the enjoyment it gave such a feisty lady. When she was about nineteen and working for a newspaper, Genevieve enlisted and became a Company Officer with the Australian Army Medical Women’s Service in World War II. After the war she trained as a nursing sister and spent over eighteen years in Africa with the Church Missionary Society until she was seconded to Save the Children. When she returned to Australia she worked for Scripture Union and later the Nurses Christian Fellowship.

Is the character 'Joan' inspired by any of your grandchildren or perhaps your great-granddaughter? Why did you choose to set this children's book during the time of the Great Depression?

Actually the character and adventures of Joan are based on my own childhood. I was quite young at the time, but have a number of memories of the Great Depression of the early 1930s and how it affected so many people as they lost their jobs and despaired of being able to feed their families.

You're a self-published writer, which is already time consuming in itself, but you are also a wonderful grandmother to 13 children and a great-grandmother to one beautiful little girl. However do you manage your time? And how much time do you set aside a day for writing and/or other tasks?

Oh, I don’t think I’m very organised, but when I’m engrossed in writing a book it can be most frustrating to have to stop to do something else, so I often wake early in the morning. I find that’s a really good time to write and think of fresh ideas. It’s the same with my painting. It can be difficult to get back into the right frame of mind after an interruption.

You said you love going on holidays. What is your ultimate, hands-down, favourite holiday spot and why?

My favourite holiday spot is the next one I’m planning, whatever that might be. Now I’m older, I’m not so enthusiastic about going on long flights and feeling like a sardine squashed into a tin for many hours. I do love going to Phillip Island in Western Port Bay; there are some lovely walks and nature reserves and so much to see and do. Another favourite is Kyneton, also in Victoria. It’s a country town with a bushland resort and there are mineral springs nearby. I love that water that comes out of the ground sparkling, although not all my children are so enamoured.

Do you have any strange or funny writing rituals or habits that, however irrational, you can't seem to break? Do you have reasons for them?

When I’m into a book it just about takes over and I’ll wake up in the night and think of something I want to add, so I always keep a pad and pen in my bedside table drawer. If I don’t write it down, in the morning what I thought was a brilliant idea may have completely evaporated.

When did you first begin writing? Did you have a passion for writing even at a young age or was this something you discovered later on?

I had a teacher and a mother who were both great encouragers. When I was quite young I became a ‘Sunbeam’ with The Sun, a Melbourne newspaper. There was a section for Sunbeams and we sent in stories and poems, so it was a red letter day to see our work in print. My mother was a member of the Melbourne Shakespeare Society and the Australian Literature Society, and from when I was about ten years old she would take me with her. People would often read excerpts from their work and some of the men and women seemed to me to be quite eccentric in their clothing and gestures.

What other authors are you friends with and how do they help you become a better writer?

I have a number of friends who are authors; some around my age and some who are much younger. Some of them have written some amazing books and it’s always a great joy to spend time with them and talk about their books - usually the one that they are working on at the time.

If your house was on fire and you had the time to save only one book that you've written, which book of yours would you save and why?

My mother used to reply to that: ‘My Bible and my Shakespeare.’ I have a number of different translations of the Bible and I would probably just have to grab the nearest. Most of my books are on file at the printeries I use or with Amazon, so I could always get copies from those sources. More important are the ones I’m working on at the moment and they’re on my computer, so I’d have to take that!

What does your great-granddaughter think of you being an author? Did you ever read your books to any of your children/grandchildren/great-grandchild?

My one-and-only Great-granddaughter is only a few months old, but my grandchildren seem to enjoy my books, as do my children, who are all parents themselves. My eldest daughter is very good and helpful with editing some of my manuscripts.

Who or what were some of your greatest inspirations growing up?

I loved Kipling’s ‘Kim’ and several of the old ‘classics.’ I look on my bookshelves as the home of many old ‘friends.'

What's your favourite time and place to write in?

Anywhere and any time. When I’m writing I’m not aware of my surroundings - or the time! Well, until I realise that I’m thirsty or it’s well past a mealtime.

Pick one rare flower you'd love to have in your garden: Chocolate Cosmos or Middlemist Red?

I don’t know Chocolate Cosmos, but when we were children Dad grew the vegetables and mother the flowers. She always planted Cosmos to encourage the Goldfinches. They loved the seeds. We had a big old almond tree with inviting branches and my sister and I would take our books and cushions and perch in the tree to read and watch the colourful little birds in the autumn.

When writing, do you prefer to be more original or deliver what the readers want?

I’m told that I should write what the readers want and I guess that, when I’ve done that, those books have been the most successful, but I usually prefer to write what is most interesting or fun to write. I do enjoy doing research for books, too. Even when it’s imaginative, the facts need to be correct.

Lastly, what's the best way to market your books, according to you? Has your time with AllAuthor been fruitful for your work? Would you recommend this platform to your other author friends?

I haven’t been with AllAuthor for very long, but I really appreciate what they are doing for authors and would recommend it, as they are most helpful and enthusiastic. I have websites, such as www.bscott-branagan.org which is an online bookshop to advertise my books, and I’m told that Amazon is very good, too, but so far they have not sold many of my books.

Have brimming questions to ask author Bronwen Scott-Branagan? Ask the author whatever you like, but keep in the appropriate zone.
** Please note, unanswered questions will not appear on the page and refrain from posting promotional messages.

The author, a good book and you. Contact Bronwen Scott-Branagan here.
** No Spamming: Spam is an irritant to regular users or the authors. Please note that bombarding promotional mails/messages is strictly prohibited. Your IP address may be blocked if found doing so.