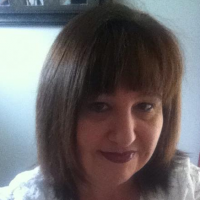 Writing was always my favorite subject in school. Creating stories and letting my mind roam free gave me a release. I only wish I would have started this journey sooner.

Now, a little about me... I live in a small town in Southern Illinois; we say hon and sweetie here, and if I know you, I may even throw in a babe.

I am not a full-time author yet, wouldn't that be a dream come true? I still work in the medical field and enjoy it. I'm a mother of 3 crazy, but wonderful kids and a "Noni" to my grandson.

I have a dog and a cat, if I still lived in the country I would have a pet cow. What? They are so cool! I used to have a pet cow named MOOfassa, yes, as an adult. I taught him to play tag. It was a blast until he was about 660lbs with horns, however; he tried to be very careful.

I really hope you enjoy my first book, and hopefully soon, there will be more. 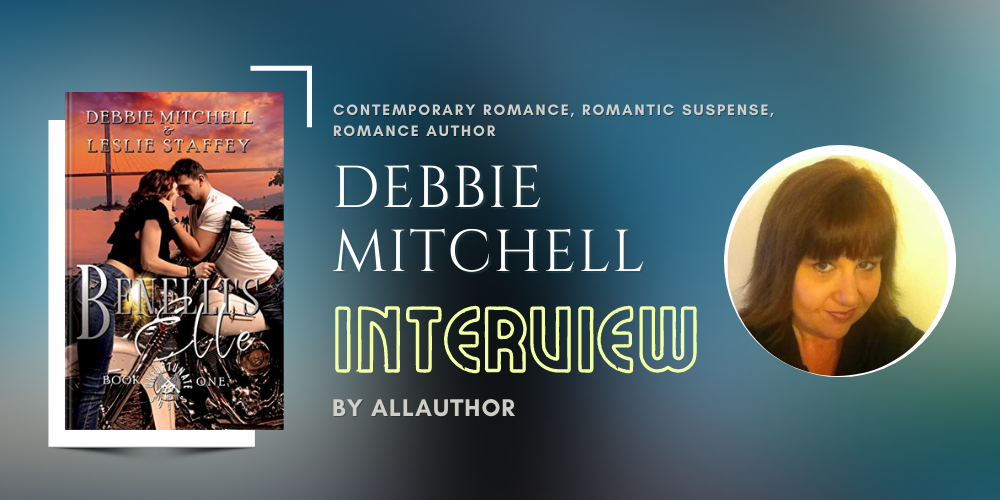 "Debbie Mitchell was born in Illinois. As a child, she played school a lot. She wanted to be a teacher. She loved reading as a child. A happily-ever-after kinda girl, she reads mostly romance, from paranormal to Motorcycle Club, love rom-com. An inspiring woman, Debbie writes with passion and heart."
Where were you born? Since how long have you been living in a small town in Southern Illinois?

I was born in Illinois and I have been here my whole life.

Oh wow, what a question. As a child, I played school a lot. I wanted to be a teacher. I taught a couple younger girls how to read. One is now a teacher and the other works for a major newspaper, so I guess I did a good job back then, haha. I’ve worked in some different teaching capacities. I wouldn’t say that dream died, it just changed.

I loved reading as a child. My favorites were The Boxcar Children, ADORED the Trixie Belden series, all of Judy Blume’s work probably between 10-12. As an adult, I read mostly romance, from paranormal to Motorcycle Club, love rom-coms (especially audible). I’m a happily-ever-after kinda girl. I do read non-fiction. Usually something on healing or metaphysical.

Which is your greatest experience of working in the medical field?

It has to be knowing people survived because of something you did.

Is it better to self-publish or find a publisher for first-time authors?

I currently self-publish. I can honestly say I’ve never tried to find a publisher. I know so many Indie Authors, and making friends in the writing community is such a blessing. I don’t think people realize how hard it is to be Indie. You have to learn so much more than writing. You have to learn to format, compile, market, design swag, and the list goes on and on. You also have to edit before you send to an editor (and after), find beta readers, arcs, make groups for them. I have learned so many things on this journey.

How did you come up with the plot of your novel, Stack'd Against Ruger?

Well, a fellow book enthusiast and co-author Leslie Staffey, invited me to a book signing where we met some amazing authors. She said, “Hey, let’s write a Motorcycle Club Romance Series. I told her sure. We wrote down some things that might happen, mostly came up with character names, and I went home and started writing Benellli’s Elle. We met at least once a month to go over the story and like I said in question five, I started learning everything I could. I was basically done with book one and came up with some plot twists and the ideas just went from there. The second in the series, Stack’d Against Ruger, just followed. The characters came to life and I not only wanted to tell the back story of Michelle & Reaper falling in love, but how she was able to move on with Ruger. Ruger was best friends with Reaper and when Reaper was taking his last breath, he wanted Ruger to be there for her.

How many books do you plan to write in the Unfortunate Souls MC series?

Originally, there was going to be ten. I know at the very least there will be four, readers are ready for Phoenix’s Zen which will be book three, but are most excited for Lucky’s book. He’s hilarious.

How do you decide upon the perfect book titles?

There are so many MC Romance books, we wanted to try to find names that weren’t already used often. As for the series name, we wanted something that wasn’t already used by other writers, but also not used by a REAL Motorcycle Club. That is a big NO-NO.

I haven’t had many of my family read the books. They are pretty steamy and there is quite a lot of violence in the first book. They are very proud of me though. My brother did read book one and told me that my mind is pretty twisted, haha.

What do you love the most about writing?

I love how different scenes pop in my head and demand to be written. I usually don’t do outlines unless I’m stuck. I’m what they call a “panster.” When sitting down at the computer, I just look at the screen and start writing and the story unfolds as I type. Other than a happily-ever-after, even I don’t know how a book is going to progress or end. If a scene is REALLY in my head, I will write it, even if I don’t know where it’s going to fit in yet.

Why are book reviews important?

Oh my gosh! Reviews, especially for a new writer, are so important. There are millions and millions of books and authors out there in the world, so it’s really hard to get a reader to find your books. The more reviews you get, the easier it is to get more readers. I’ve been very lucky in that, though, I don’t have thousands of reviews, the followers I do have are completely authentic and supportive. It’s so odd, me, a girl from a small town, having fans from all over the United States, Canada, and even the UK. I am so honored by them.

What is stopping you from becoming a full-time author?

Lack of reviews. Just kidding. I’m just getting started in this business, so I’m patient. You usually don’t become known until you have at least three books or more out. From the feedback I have received, I know that this dream will be a reality. I have so many covers ready to go, the books will come. I have a great cover artist that I work with and she keeps making me want to buy them. I just bought another last night.

I love traveling and have several trips booked in the next couple years, mostly book signings. I will be signing books at High Octane in Venice, Florida next year and just got invited today to be an attending author at Authors & Dancers Against Cancer in Toledo, Ohio. It’s a huge event with over fifty authors. I’ll also be doing a signing in 2023 in Santa Claus, Indiana.

Which is the next book you are writing? What is it about?

Currently I’m working on Phoenix’s Zen, the third book in the Unfortunate Souls MC series. It’s due to be released in October, but I’m hoping to have it done by the end of July and to the editor. Phoenix is a tortured soul who meets Zen. She’s very calm, full of peace and the woman who repairs all that is broken with him. There is always steam in this series, as well as, edge of your seat excitement. I love books that make me go through the whole range of emotions from laughter to tears, extreme love to anger over the bad guys. That’s why I want them included in my own books. I’m also working on The Biker’s Baby, One Night With You, and about three others. Whenever an idea hits that doesn’t fit with the series, I start typing for the others.

Thought I would add in a little extra for you. We hold contests before each book in the series and whoever wins, gets to be added as a character in the book. The first winner appeared as himself. Now, the winners are creating their fantasies and making up characters and I’ll immediately come up with a story that fits them and write them in. I’ve had so much fun doing this and the winners are immortalized in the book.

I joined AllAuthor about a year ago I think. The customer support is stellar, resolving any issue I’ve ever had, quickly. I really like the review generator, the 3D graphic generator, the monthly cover contests and more. I am really impressed with the site. One of my only things that I would love to see is that instead of you doing a twitter post, have another platform such as Instagram or Facebook. I think the author, as well as, AllAuthor, would get more traffic.

Debbie Mitchell is a thinker and a doer. These are the quotes by famous personalities the author resonates with.

Have brimming questions to ask author Debbie Mitchell? Ask the author whatever you like, but keep in the appropriate zone.
** Please note, unanswered questions will not appear on the page and refrain from posting promotional messages.

The author, a good book and you. Contact Debbie Mitchell here.
** No Spamming: Spam is an irritant to regular users or the authors. Please note that bombarding promotional mails/messages is strictly prohibited. Your IP address may be blocked if found doing so.