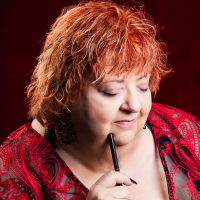 Delta is always happy to hear from those who enjoy her work - and even those who don't. She can be reached at deltajames-author@hotmail.com 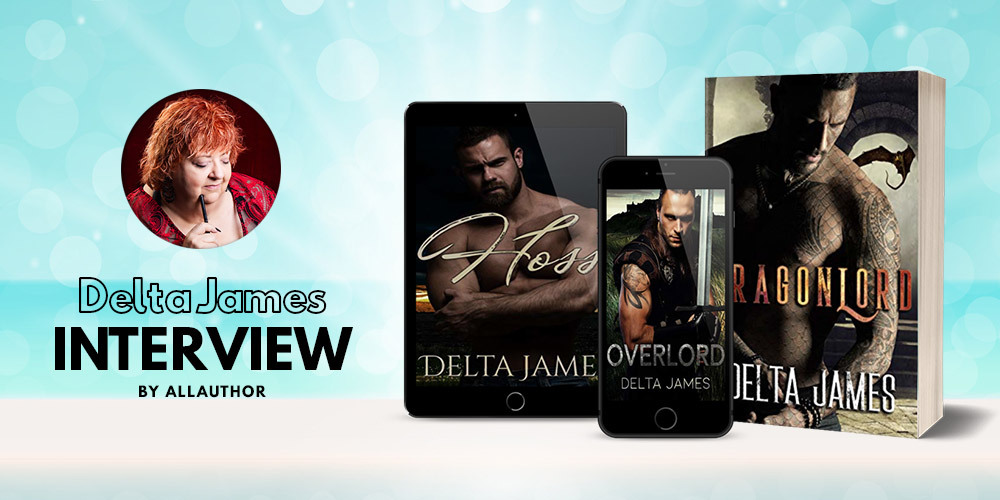 "Delta James is one amazing author. She wrote her first novel, under a different pen name, which was published in January of 2018. Her first book under the Delta James pen name was Brought to Heel. Delta James pens page-turning, action-packed, romantic suspense filled shifter tales."
Where have you spent most of your childhood? Which is your fondest childhood memory?

I spent the vast majority of my childhood on the back of a horse in the Pacific Northwest. It is the place I was the happiest, dreamed my wildest dreams and tried to chart the course of my future. To be honest, I had an idyllic, incredibly happy childhood so picking my favorite memory would be difficult. My earliest childhood memory is of being on a sorrel pony with a flaxen mane and tail. My father is leading the pony on a sunny afternoon as I duck under the branches of an enormous weeping willow ay the top of the hill that sweeps down to a pond with trumpeter swans… I was two.

When did you decide you wanted to become an author?

Being s successful novelist was a long-held dream. I wrote several non-fiction articles for various horse publications and even had a literary agent interested in a completed manuscript, but I put those dreams aside to pursue other goals. Then in late 2017, I asked myself what had happened to the girl whose motto had been “Fortune Favors the Bold?” I decided I wanted her back. I wrote my first novel, under a different pen name, which was published in January of 2018. In April of 2019, I was able to quit my “day job” in order to write full time.

If you didn’t write, what would you do for work?

What I did in the past was work as a chief administrator in either healthcare or in the legal field, I enjoyed the human resources aspect of those jobs so I suppose I would look at taking a job that was mostly in human resources.

How long on average does it take you to write a book?

Generally, it takes me about three weeks to write a full-length novel. Along with writing novels, I write novellas for various anthologies I’ve been asked to join and produce at least four free novellas a year which are available to my newsletter subscribers.

Which was your first book? How did you begin to write it?

My first book under the Delta James pen name was Brought to Heel. I wrote that book as an experiment to see if I could write a paranormal novel. It sparked an eight-book series, which has then had spinoffs from it.

What sparked the idea for your series, Wayward Mates ?

As mentioned above, the first book was an experiment to see if I could write a paranormal romance, which for the record is something I never had a particular interest in as a reader. As a writer, I love paranormal as it frees me to create my own worlds where true love conquers all and right always wins.

What inspired you to write your book, Tamed on the Ranch?

This is one of three books that I say readers are directly responsible for. When Taming His Cowgirl came out, it was extremely successful, but almost immediately I had readers clamoring for Luc’s story. The problem was Luc was a minor character who appeared with no last name and only took up about half a page. I figured if readers were that interested, I needed to write his story… so I did.

The other two books were Claimed and Mastered and Hunted and Claimed. Claimed and Mastered came about because I had a reader who insisted that Ava (who was a minor character in one scene of another novel) had an intriguing story I needed to tell. When she shared the backstory she had created in her head, I agreed there was something there. Hunted and Claimed came about when a reader told me she wanted to see one of my heroes “really work for it.” Thus, the first of my truly kick-ass heroines, Riley, was born.

Who inspired the character of Catherine Livingston in "Claimed and Mated"?

Catherine was never supposed to be a main character. She and Marco show up in another book and Marco insisted they had their own story to tell. I began to write their story and went to an author event. Driving home, after having completed about 2/3 of the book, Catherine whispered in my ear that one of the women kidnapped and taken against her will was, in fact, her kid sister. I had to go back and weave that throughout Marco and Catherine’s love story.

How did you come up with the title of your book, Brought to Heel?

I didn’t. I had originally titled it Shadow of the Alpha. My publisher suggested Brought to Heel was a better title. As I had changed publishers as I believed my current publisher, Stormy Night Publications, was one that could help me accomplish my goals, I decided to take a leap of faith and go with their suggestion. The running joke now between my publisher and I is that I am awful at titles and so normally submit my manuscripts with no title at all!

What is one thing that you, as a romance author, would never write about?

I try hard to never say never. I used to say I wouldn’t write DaddyDom as it wasn’t something I really understood and wouldn’t want to do a disservice to those who either live that lifestyle or love to read about it. The problem is, I had a character who presented himself to me that way and would not budge. So, I asked Maren Smith, who writes a lot of DaddyDom if she would collaborate with me. She graciously agreed and we wrote Always Daddy’s Girl.

Do you believe in writer’s block? How do you get over it?

I don’t believe in writer’s block for me. I do not discount that other authors experience it. My advice is always “Just sit your ass in the chair and write.” I also know that should I ever experience it personally, I need only to take a drive with my best friend, Chris, as we almost always end up spinning stories and I come away with either a solution to a plot point or a new novel idea.

Walk us through the process of writing a romance book and what the most important aspects are.

My “process” is that characters come forward to tell me their story. I am a complete and total “pantser” – I neither plot or even outline my books. I have characters who come forward to share their stories with my readers, I am merely the conduit by which they do so. I am one of the most down-to-earth, pragmatic people you will ever encounter. And I know how “airy fairy” that sounds, but it’s the only way I can explain it.

An Amazon reviewer said that one book was short on plot and long on eroticism. I hate to admit it, but that person was right. I try to ensure that criticism can never be true again. Don’t get me wrong, I haven’t dialed the eroticism back, but I have made sure that there was a plot that would hold together even if there were no sex scenes.

The best criticism was that while my heroines were good, they needed to make my men “work harder for it.” That allowed Riley to come forward, who was the first of my truly “kick ass” heroines.

What are some sites or resources that have been really helpful to you as an author?

Interestingly enough, Facebook. Through Facebook, I have met so many wonderful authors and readers who have shared their expertise, ideas, experiences, etc., which have allowed me to grow and learn. Another invaluable resource has been my publisher who pushed me to be a better writer through their editing process. And lastly, my PA Renee Brooks who has guided my career and helped me to “build my brand.” Her commitment to my success has been integral to it.

Lastly, what do you think of your AllAuthor experience so far? Would you recommend this platform to other authors and friends?

Overall, I have been very pleased. I would most definitely recommend it and believe I need to take more time to learn how to better use it.

Have brimming questions to ask author Delta James? Ask the author whatever you like, but keep in the appropriate zone.
** Please note, unanswered questions will not appear on the page and refrain from posting promotional messages.

The author, a good book and you. Contact Delta James here.
** No Spamming: Spam is an irritant to regular users or the authors. Please note that bombarding promotional mails/messages is strictly prohibited. Your IP address may be blocked if found doing so.