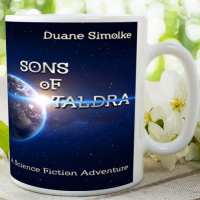 Three of my books have received StoneWall Society Pride in the Arts Awards, and one received an AllBooks Reviewers Choice Award.

I love books, movies, and TV shows, especially with gay and/or scifi elements. I also love rock and dance music, 1970s-the present (and some 1960s).

I tweet and retweet about books, movies, etc., often trading follows and retweets with other twitter users.

My name is pronounced "Dwain Smoky." 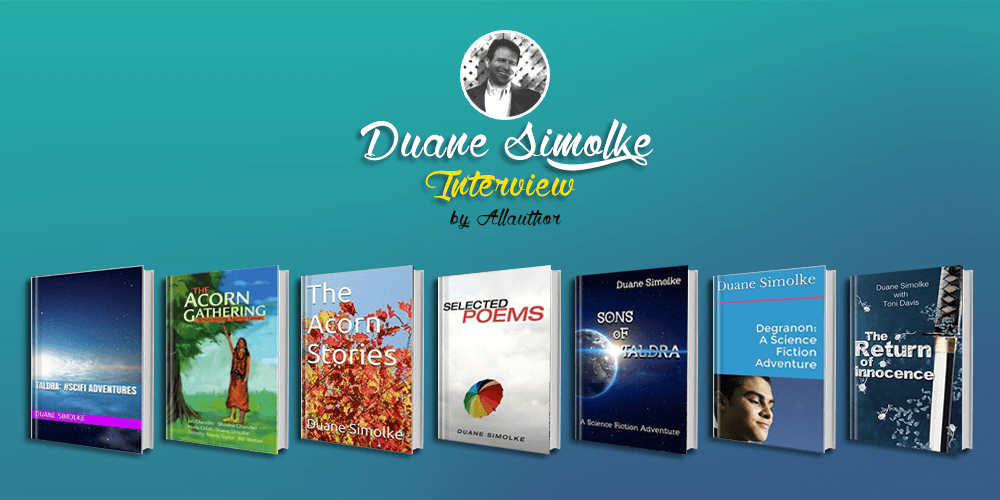 "Our pro-author Duane Simolke (Dwain Smoky) have so much to share about himself and his experience throughout life. He loves books, TV shows, and dance & music, and his thought provoking writing always manages to touch hearts and open eyes. He gets inspired by anyone who helps and respects other peoples without any personal benefits. His creation 'The Acorn Stories', showed that how people tend to help or mistreat each other, as well as their interactions in general. Lastly, his advice to other writers is to spend more time on writing and focus on the material of their story to improvise the content."
Did you grow up in a small town?

During most of my childhood, I lived outside the small town of Minden, Louisiana.

I have always looked up to anyone who helps and respects others. I’ve never managed to narrow it down, but the military, law enforcement, emergency workers, and teachers come to mind.

What are some day-jobs you've held? When did you decide to pursue writing as a career?

I’ve worked in writing labs, classrooms, restaurants, a grocery store, a media relations department, and all sorts of other areas. I knew from before my teen years that I would be a writer, and my other work experiences only gave me more material.

I no longer manage to follow a writing schedule. It’s all about finding time, but also about running to a computer or piece of paper when something hits me. I spend much more time revising than drafting and have come to love revision much more than the initial scribblings. I want to see how they evolve.

What was the first book award you ever won? What did you do to celebrate?

In college, I won a Harbinger award for excellence in fiction. I celebrated by writing more stories. The next award would come years later, from StoneWall Society. I celebrated the same way. It’s very gratifying and motivating to have my work recognized. Still, I would write even if no one liked my work.

What were some challenges you faced while writing your essay and poem collection "Holding Me Tog ether"?

I was closeted when I started writing that collection, which happens to be rather personal and rather gay. Some of the works appeared in publication, with just DS as my name. The less gay ones appeared under my actual name. Holding really pushed me to be honest with myself and wrestle with my feelings about a lot of issues, but mostly with internalized homophobia. It was a therapeutic exercise. Later, I heard from many people who said it helped them with understanding themselves or their loved ones, or just that it gave them hope.

Is there any particular story that was especially hard to write, emotionally?

Not just one in particular. A few of the tales in The Acorn Stories involved characters in abusive relationships or other painful situations. Even as I revised those, I often got choked up, as if they were real. When I established a table of contents, I made a point of alternating those stories with some that kept to the book’s overall light tone.

Which of your characters do you most relate to and why?

Taldra from Degranon and Sons of Taldra. She’s a scientist who challenges the dystopia of her world. I put so much of myself into her, but changed more than just my gender. I’m part Choctaw and Cherokee; she’s Iroquois. Instead of being gay, she must hide the fact that she sees in color, while a supposed miracle virus has had the side-effect of making most people only see in black and white. It’s part of her closet. She also must hide some of her progressive views and the fact that she isn’t always the ideal weight. Both of Taldra’s sons are gay, like me, but much braver, smarter, and younger.

What inspired you to write The Acorn Stories? Are these stories taken from a real town and real people? Or did you write everything from your own imagination?

A lot of the people and situations in The Acorn Stories represent bits and pieces of my memories, but I mixed everything together and made up the rest. Initially, I set it at a college, but decided it would work better as an entire town. After I moved to Lubbock, I found aspects of my chosen home to infuse into Acorn. Still, Acorn is much smaller than Lubbock.

What are some ideologies or messages that you wanted to get across with The Acorn Stories?

I tried not to be heavy handed with any sort of moral, but I just showed how people tend to help or mistreat each other, as well as their interactions in general. The bigotry I portray is obviously not something I would want people to emulate, but I want them to acknowledge its existence and deal with it.

What kind of books do you like to read in your spare time?

Mostly science fiction and fantasy, but also a variety of LGBT, history, and humor. I read the classics back in college but still love them and think about them; they haunt me in the best possible ways.

A single mom, her two gay sons, and shapeshifting alien enemies, your book "Sons of Taldra" is packed to the brim with action and suspense. But what made you come up with this idea? How did you do the research for this book?

The Taldra books mostly take place on Valchondria, which is just Earth in an alternate reality. The first book, Degranon, included references to alien creatures that had ended Valchondria’s attempts at colonization and space travel. It also contained references to secrets held by Valchondria’s police force, the Maintainers. Then came the sequel, Sons of Taldra. I always saw Taldra and her family as Native American, so I drew from Iroquois culture to give more background to Valchondria and Navajo mythology to help me create the shapeshifting aliens. Overall, both Taldra books reflect a variety of real-life conflicts and issues. Mostly, though, I just created scifi adventures I would want to read.

What is one thing that always sucks all motivation and inspiration to write from you and how do you deal with it?

Twitter. I just check my notifications there, and suddenly my writing time is gone. I’ll tell you when I found out how to deal with it.

What is one unseen, but vicious aspect of the book industry that you didn't discover until you yourself became an author?

The fact that celebrity, gossip, and shock value seem to matter more than the quality of storytelling.

How often do you promote your books on social media and do you think it helps?

Constantly, and no. I want to spend more time just writing. When others talk about my work on social media, that helps, but I don’t mean just retweeting. Writer RT trades are overrated and overused, mostly going out into an echo chamber. Writers should focus on writing, and I plan to break away from my recent focus on social media. I have well over 7000 twitter followers, and I love the interaction with them, but my books sold much better before I used social media. Some writers integrate social media into their creative process, even developing books from their posts. Others find ways to create a social media presence that makes people want to learn about their books. However, what works for those writers can’t work for us all.

Additionally, what are your thoughts on AllAuthor and is this a platform you would recommend to other authors?

I love the way AllAuthor encourages readers to comment on the books and even the book covers; it’s all helpful to the authors and draws more attention to their works. The social media integration is ideal, and should allow writers like me to focus on actually writing. Readers and writers should see AllAuthor as an inviting platform that groups books together in creative ways, while also emphasizing what distinguishes them. So, yes, I would recommend it, and not just to other authors.

Have brimming questions to ask author Duane Simolke? Ask whatever you like, but keep it appropriate.
** Please note that unanswered questions will not appear on the page. Refrain from posting promotional messages.

The author, a good book and you! Contact Duane Simolke here.
** Please refrain from spamming and don’t bombard the author with promotional mails/messages. Your IP/Email address may be blocked if found doing so.