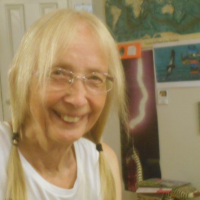 Gisela (Gigi) Sedlmayer was born on 19 May 1944 in Potsdam, a suburb of Berlin in Germany.
Her family escaped to the West just before the infamous wall went up. They moved around in Germany until finally settling in Munich where Gigi studied architectural drafting and met Albert in 1965, marrying in December 1967. She worked as a civil draftsperson in various private consultancies in Munich.
Since her uncle was a writer, she tried to write short animal stories herself. Nothing further came of it, but she developed a love for the written word and started to consume books.
In May 1975, Gigi and her husband moved to New Zealand. Because of language challenges, she started a handicraft business. As a specialty, she made colourful parrots of which she sold thousands in a few years.
In 1988, they decided to adopt and became adoptive parents of twin girls the year after. They lived in New Zealand for eighteen years and moved to Australia in September 1992.
Two years later Gigi was diagnosed with cancer. After operations and radiation, she withdrew, thinking that she would probably soon be dead, like her friend who died of cancer, but her two little girls gave her the courage to keep going. After a few years, still among the living, her brain started to work again, so she thought, ‘Get a grip on yourself and do something good with your life’.
She remembered the time she wrote short stories and got inspired again, seeing her husband Albert writing the story of their adoption. Her English became increasingly better so she pressed on to develop her creative writing.
Albert taught her how to use a computer and she wrote many short stories. She entered them in competitions and often got very good reports back, which gave her confidence to go on writing. One day the idea for the TALON series came to her and she spent the next several years bringing the story and the characters to life.
She now loves writing and spends most of her time at the computer, developing new story lines. She also loves traveling, 4x4 touring, swimming, gardening, handcrafting, reading, fossicking and enjoys good adventure DVD’s or going to the movies.

Here is an interview
https://donmassenzio.wordpress.com/2016/06/10/20-questions-with-gigi-sedlmayer/comment-page-1/#comment-3292

Gigi Sedlmayer has earned excellence awards over time. Here is the glimpse of the accolades clinched by the author.

Have brimming questions to ask author Gigi Sedlmayer? Ask whatever you like, but keep it appropriate.
** Please note that unanswered questions will not appear on the page. Refrain from posting promotional messages.

The author, a good book and you! Contact Gigi Sedlmayer here.
** Please refrain from spamming and don’t bombard the author with promotional mails/messages. Your IP/Email address may be blocked if found doing so.