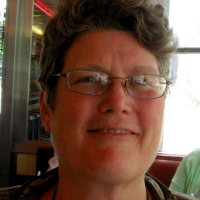 THEY, a biblical tale of secret genders by Janet Mason was published in 2018 by Adelaide Books (New York/Lisbon).
Mason is an award-winning creative writer, teacher, radio commentator, and blogger for such places as The Huffington Post. She records commentary for This Way Out, the internationally-aired LGBTQ radio syndicate based in Los Angeles. Her book, Tea Leaves, a memoir of mothers and daughters, published by Bella Books in 2012, was chosen by the American Library Association for its 2013 Over the Rainbow List. Tea Leaves also received a Goldie Award. She is also the author of three poetry books. Mason is a lay minister at the Unitarian Universalist Church of The Restoration located on Stenton Avenue in Philadelphia. 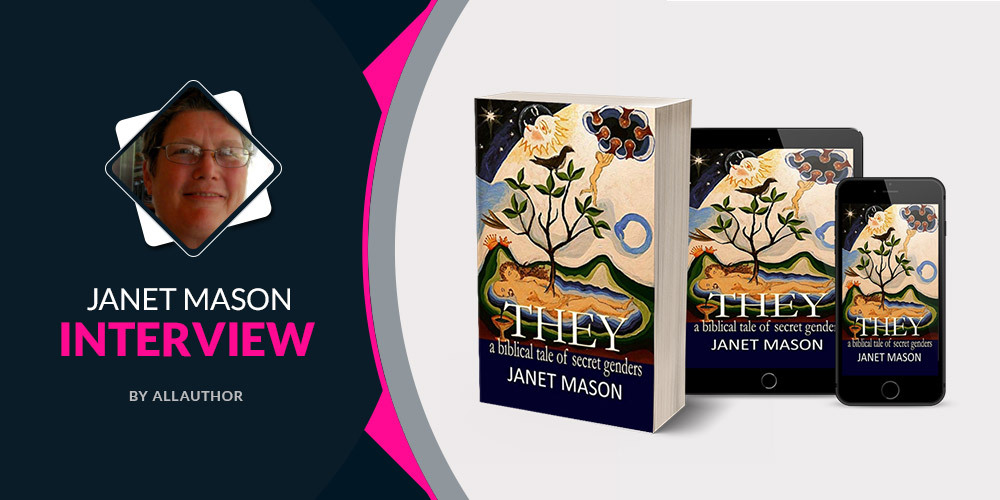 "Janet Mason's writing is clean, sharp, and inspirational. Tea Leaves, a memoir of mothers and daughters by Janet Mason, is an excellent read. She writes the most ordinary occurrences with love and compassion and gives them a unique perspective. Her aim is to help readers with their lives through her stories – real or fictional."
Where are you from? How has our childhood influenced you as an author?

I grew up in Levittown, a working-class suburb of Philadelphia in the states. The place was a bastion of sameness and it was very difficult there being different, but I did survive and became a writer. I was the first in my family to attend college and you never heard of being a writer as a career aspiration. I always wrote stories – even as a child. I also read a lot – you could call me a bookworm and was tall and loved to climb trees -- so I almost actually had my head in the clouds. I also got a very strong work ethic from my upbringing -- which came in handy.

I went to Temple University in Philadelphia – the same university where I now teach creative writing. I majored in journalism and then worked in the field and then in something called “communications” that included marketing. I worked for nonprofits – one was providing “forever” homes for legally free foster children. In another job, I worked for a nonprofit that provided services to disabled people and to elderly people. Journalism and marketing are actually good backgrounds for a creative writer because I learned how to set and meet deadlines. I also developed a sense of how important marketing is. It’s very important to get your book in front of the potential reader.

I did my own creative writing – nights, weekends, days off -- the entire time I was working.

How has been your experience of being a radio commentator?

I’ve written and recorded commentary for the internationally syndicated LGBTQ radio program called This Way Out for the past twenty years. I’ve pulled back considerably in the past year to focus more on my creative writing. Over the years I’ve learned a lot about writing for the “ear.” And, of course, it keeps me in the loop about the LGBTQ books that are being published. I’m also a lay minister for our local Unitarian Universalist church – something I’ve done for about five years. I, and some professional actors – a husband and wife -- read from THEY, a biblical tale of secret genders during the time when I was writing it. I put the excerpts on You Tube.

Which was the first book you wrote? Did you publish it or plan to?

Tea Leaves, a memoir of mothers and daughters was the first book I wrote. I found a publisher (Bella Books) in 2012 after I self-published a novel called Hitching To Nirvana. I wrote the novel after Tea Leaves. I wrote Tea Leaves after I took care of my mother when she was terminally ill. My mother was a real storyteller and had a wonderful sense of humor and that’s reflected in the book. As I recall, that humor got me through.

How do you try to grab your audience in and never let go through your books?

My aim is to help readers with their lives through my stories – real or fictional. I find that I write meaningful books – meaning that they mean something to me and my readers. After Tea Leaves was published, I received a note from a reader who told me that my mother was so much like her mother – but being from a working-class background, she had never seen her own life reflected before.

After THEY, a biblical tale of secret genders (Adelaide Books) was published, someone at a gathering on finding out who I was said, “You’re that Janet Mason?!” I loved it, of course, and was deeply honored. It turned out that this person, a trans woman, had read the book and then put it in the library of her LGBTQ center.

I actually never have had writer’s block. Maybe I’m not repressed enough. As a teacher, I would suggest doing research on topics that interest you during your daily writing time and also taking notes on what interests you and on what you may want to research.

When I get an idea for a book, it often feels like I can’t refuse the Muse. It’s kind of this intuitive cloud that descends on me and then I can’t stop writing until I’m done. I let the ideas arrive and then I begin to write them down. Sometimes, I do a rough outline – meaning that I jot my ideas down in a file. The ideas ultimately give me a structure and I break the writing down into sections and chapters. Then I begin. Other times, I just start writing. So far, I have written from the beginning to the end. I’ve heard other writers say that they write sections – maybe they’ll do the middle first and then the rest.

What challenges did you face while writing your book, ":They: A Biblical Tale of Secret Genders "?

I guess reading the Bible was a challenge. I was becoming a Unitarian and reading the bible was not mandatory, but I had always been curious about it. What I found was that there was really some beautiful writing in there but that there is also some extremely misogynist stuff too. So instead of putting it down, I began to improve on it. That’s how my novel THEY was written. If I simply had stopped reading the Bible, there wouldn’t have been a novel. It helps to be curious and open. I was also influenced by taking yoga and doing Buddhist meditation.

I realize we all have our individual paths, but I really do want to make life easier for others through my writing. I also write the book that I want or need to read – the book that hasn’t been written before.

How do you decide if an idea is feasible or not?

I don’t stop to think. That way I don’t get in my own way. If I stopped to imagine the bad things that might happen – including that people might be offended – I probably wouldn’t write. Or maybe I would write more.

Is writing your full-time job? How do you ensure that it continues to be enjoyable for you, and does not become a source of monotony or frustration?

I do consider writing my full-time occupation. Writers are always observing and wondering. I also teach creative writing part time. Currently I teach locally at an adult education school in my neighborhood in Philadelphia and also for Temple University. The teaching helps my writing. For one thing, I take my own advice! I guess writing and revising can be monotonous. But I don’t see it that way. Perhaps I’m just wired to find the excitement in finding the right word.

Which is the next book to be released? What is it about?

My novel The Unicorn, The Mystery is scheduled to be released at the end of this year by Adelaide Books (New York/Lisbon). It’s set in an abbey outside of France in the 1500s. The novel was inspired by the unicorn tapestries hanging in The Cloisters (part of the Metropolitan Museum). There are seven tapestries and they tell the story of the hunt and capture of the unicorn. To this day, the story is called an unsolved mystery. The muse descended on me in the room of the unicorn tapestries and I ended up writing a fictionalized version of the mystery. I did a fair amount of reading and research before starting the writing I did for a year – most of my other novels were written in a few months.

Looking back on your journey as an author, is there anything you regret or wish you could've done differently?

I once saw a photograph of the writer Gore Vidal sitting in a chair with a cat in his lap and the caption read, “no regrets.” That’s how I feel.

I found about you on Twitter where I spend a lot of time. I was intrigued so I researched you online and liked what I read, so here I am!

My experience with AllAuthor has been great. I’ve been told by some that they could not work with me because of my subject matter. But aside from being happy to find someone I can work with, I know I can rest assured that AllAuthor is helping readers find me.

Have brimming questions to ask author Janet Mason? Ask the author whatever you like, but keep in the appropriate zone.
** Please note, unanswered questions will not appear on the page and refrain from posting promotional messages.

The author, a good book and you. Contact Janet Mason here.
** No Spamming: Spam is an irritant to regular users or the authors. Please note that bombarding promotional mails/messages is strictly prohibited. Your IP address may be blocked if found doing so.