New York Times and USA Today bestselling author, Teresa Gabelman, writes paranormal romance and contemporary romance with a side of humor in each story. Her heroines are strong and independent keeping the sexy alpha heroes on their toes.

Being a full-time writer has allowed Teresa to connect more with readers which is what she loves most about writing. If you find the time she would love to hear from you! 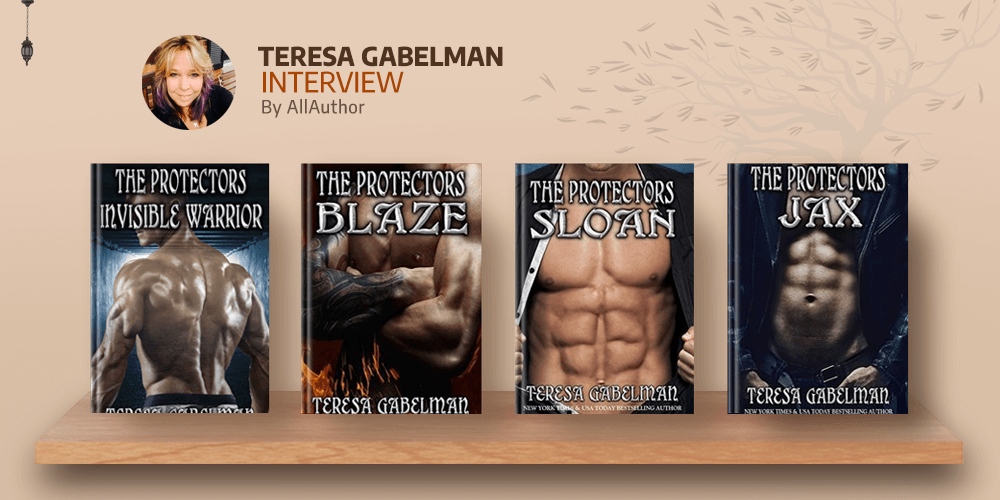 "The New York Times and USA Today bestselling author of the 'Protectors Series', Teresa Gabelman was born with a club foot so she spent a lot of time in and out of hospitals. She lives in Ohio with her husband, son, two dogs and their pet snake. Apart from reading and writing she also loves mixed martial arts, fishing and hanging with my family doing whatever. Her husband got her into fishing which she hated first. She started putting things down on paper in around 1990, but have been writing in her head for a lot longer than that. She like places with water like beach or boat on a lake with a fishing pole and something to read & write on. She is a third-degree black belt in Taekwondo and also a huge Mixed Martial Arts fan. When not writing she can be found either screaming like a crazy woman at MMA fights or reading in some quiet corner with her Kindle. She loves stories with romance, humor, sexy alpha men and the women who drive them crazy."
Allow us some insight into your childhood and what molded you into becoming the person you are today.

I was born with a club foot so I spent a lot of time in and out of hospitals. Back then they didn’t know much, like they do today. So being out of school, spending months at Shriner’s Hospital in Lexington, Kentucky which was hours away from my home I learned how to daydream. I would think of stories such as being a normal kid and going to school like my friends. As I grew older and noticed boys I would daydream of Donny Osmond, ‘yes, you read that correctly. Donny was my dude,’ rescuing me from something or another. One day I decided to put some of those daydreams on paper minus Donny Osmond….sorry Donny. My experience with having to restart school a lot helped me be a stronger person. I could have turned that experience into a poor me or did what I did, earn my 3rd degree black belt in Taekwondo as well as teach others with a school of our own and live my dream of being a author. Two things people told me would never happen.

Who got you into fishing? What are some other things you like to do for fun or to relax?

My husband. I hated it at first, I really did. But one night he fixed me up a pole and I got a bite. It was a big carp and I fought that thing before finally getting in on the bank. Of course I let it go to catch another day, but after that I absolutely fell in love with fishing. Now I find any opportunity to wet a line. I love to write while waiting for the next bite. I love reading, writing of course, spending time with my family/dogs and going to MMA events watching my husbands fight team kick some serious….you know what.

I started putting things down on paper around 1990, but I’ve been writing in my head for a lot longer than that. I published, Damon, the first in the Protectors Series in 2011. I consider daydreamers authors of the mind. I was a author of the mind at the age of around 8 years old.

Do you correspond with a lot of readers? Do you have any instances where you responded to a reader's comment or email and then later became close friends?

I always talk to my readers through Facebook messenger, email, my website, signings or doing Live’s on Facebook. That is my absolute favorite part of what I do. If I’m in a deadline it may take me a minute to respond, but they know I will as soon as possible. I hope I’ve become friends with everyone I talk to in the reader world, but honestly I was a reader first, author second so I mesh well with them. Some of my closest friends are through the book world that I have never met face to face. How freaking awesome is that?!

What gave you the idea for Damon (first book in The Protectors series)? Do you think that if there really was a large community of vampires in real life, that they would take pains to ensure the safety of humans from vampires and vice versa?

I never wrote vampires until my husband told me about self-publishing. I’ve always thought about it and felt it would be so cool to have a class of Warrior vampires who kept the peace between the two races. I wanted my vampires out in the open, not hiding in the shadows. I would hope if that ever came to pass and vampires came out of the shadows they would have some Protectors willing to do what my Warriors do.

Following the same premise, do you think that humans would ever truly be able to accept vampires for who they are and could both races coexist in harmony?

Sad to say, but in today’s world I doubt it. But I think it would be awesome if we could. Seriously, why can’t we all just get along?

When you wrote Damon, did you plan on making in a whole series of 10 books? If you were to do a crossover between two books of this series, which two would you pick and why?

Absolutely not. I was so scared when I hit the publish button for Damon. I thought yep, this is it. No way can I take this stress and pressure of throwing out what I write to the world. I was excited if I got one sale a month. I cried at my first 5-Star review. I learned from my first 1-Star review. It wasn’t until a friend of mine wanted to know about another character in Damon’s book, that I started writing Jared. About a month after that the books starting taking off. I’m not sure what you mean by crossover, but my books bring in all the characters. So Damon is in book 11 as well as Jared, Sid, Duncan, etc. The reason I do this is because my readers have their favorite character and I know they want to see what they are up to. I do my best to give them that experience for as long as the series continues.

What are some of the main differences you discovered when writing "Forbidden Hunger" as opposed to the books in the Protector Series? Do you think the werewolves and vampires in Stephanie Meyers' Twilight series influenced any of your writing?

I was not a big shifter reader. I actually agreed to write Forbidden Hunger because I was asked to be in a box set with other authors who I adored. Seriously, how could I pass that up? LOL! At first Forbidden Hunger was really difficult for me to write, but then once I realized I could do whatever I wanted in this world just like I did in the Protectors it flowed much better. I read the Twilight Series and I really don’t think my characters or hers would mesh very well…LOL! I liked the books, not the movies in that series. My vamps don’t sparkle and they curse a little more. HA! One thing I will say I do respect Stephanie Meyers because I believe she brought the paranormal genre more into the spotlight. Sherrilyn Kenyon is my all time favorite paranormal author! I know you didn’t ask me that, but I wanted to give her a shout out because she ROCKS! :)

Anything with water. Beach or boat on a lake with a fishing pole, kindle or computer and I’m a happy camper.

How do you decide which scenes to cut or edit out of a book when typing up the final draft?

Ugh, that is so hard, but I have a awesome editor who helps with those decisions. I totally trust her as well as my beta readers. If they don’t get it, then I know for a fact my readers won’t get it. I rely on them so much. My writing is my baby and I love doing it, but my readers come first. I know what I want to write, but I want to make darn sure my readers enjoy.

Name one book you could read over and over again and never get tired of.

How did you come up with the idea for "Blind Faith"? What are some ways in which you relate to the character Julie Daniels?

This book was something I wrote a very long time ago. I was asked to do a box set for charity and I pulled this out of my stack of books that I’ve never done anything with. I just had to get the word count right and spiffy it up some. I just love strong female characters who still have a soft side. She is probably one of my favorite characters other than Jill in the Protectors Series.

Was there any point in your career where writing felt more tedious than joyful? What did you do to overcome that?

Deadline time. LOL! I will not put a release date on anything until I have a good idea the book is going to flow, then I talk to my editor and then do the release date. I work great under pressure, but it’s not as much fun because I’m stressed to the max. I do a live on Facebook, talk to the readers and use their excitement for that release to get me past it. Works every single time.

Have brimming questions to ask author Teresa Gabelman? Ask the author whatever you like, but keep in the appropriate zone.
** Please note, unanswered questions will not appear on the page and refrain from posting promotional messages.

The author, a good book and you! Contact Teresa Gabelman here.
** Please refrain from spamming and don't bombard the author with promotional mails/messages. Your IP/Email address may be blocked if found doing so.