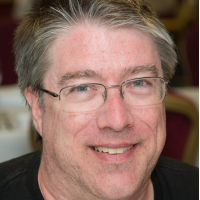 Kethric Wilcox began writing and publishing as a personal challenge to be creative in a new medium. He was attracted to the LGBT Romance genre after reading several paranormal romances where it seemed like the shape-shifters never faced dangers outside the relationship issues thrown at them by their authors. Thus was born the shifter hunting House of Beauty on the premise of a twisted fairy tale. What if Beauty and the Beast didn't end with happily ever after? Wilcox's Legend of the Silver Hunter trilogy looks at this question and then asks what happens if a member of this family falls in love with a descendant of the Beast, can they find happily ever after or are they doomed to repeat the tale. Born and raised in Massachusetts, Wilcox now lives and works in Little Rock, Arkansas in a house that he and his partner renovated. By day Wilcox is a graphic artist and exhibit designer and at night an author of paranormal romances.
Wilcox currently has two new trilogies in progress: Origin of the Vampires set in a dystopian future of the Silver Hunter world; and Legacy of the Silver Hunter which continues the story told in the Legend trilogy from the viewpoints of other couples in Kieran and Cory’s lives. He is also working on a duologue on Richard St. Martin's life as a hunter and as a vampire. 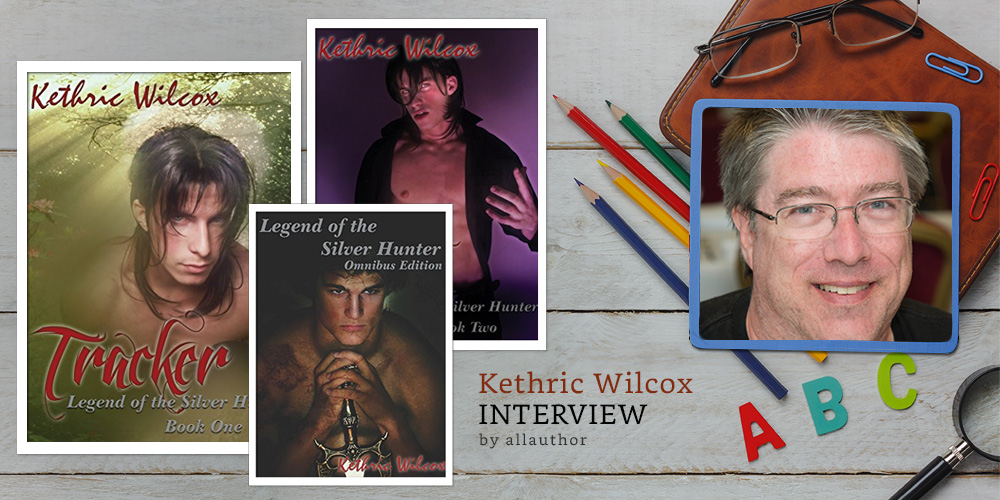 "Author Kethric Wilcox grew up on Paon Blvd in Massachusetts and has been writing off and on since high school. He was drawn to the LGBT paranormal romance genre due to a lack of danger to the main characters, wanting to add the spice of people who hunt shifters as well the hunters. As a writer, Kethric’s biggest fear is not being able to finish a story. His stories cement the fact that love is love and achievable for everyone. He is also working on incorporating more fairytales into his stories such as Goldilocks, Red Riding Hood, and Snow White."
What was the name of the street you grew up in in Massachusetts, Wilcox? Tell us a favorite childhood memory of yours.

I grew up on Paon Blvd. My favorite childhood memory is going with my grandmother to see a stage production of the Princess and the Pea, performed in theatre in the round. It was the first time I’d been to a live theatre production.

What first drew you to writing? And why were you first drawn to the LGBT paranormal romance genre?

I’ve been writing off and on since a high school where my sophomore and junior year English teachers encouraged me to enter my work into a couple of writing competitions. I didn’t win but did receive some great critical feedback. I was drawn to the LGBT paranormal romance genre by what I felt was a lack of danger to the main characters. Shifters are one of the dominant creatures in the genre, but so many of them come off as cuddly wolves. I wanted to add the spice of people who hunt shifters as well as people who hunt the hunters.

Are there any problems or cases of under representation of the LGBT community in the book industry? How do you hope to remedy that?

There’s a massive under representation of authors and people of color in the industry. I’ve seen a number of authors get hounded out of writing for offering interracial relationships and it’s sad. I have a book planned with an interracial couple (Native American and White) where I hope with enough research I can paint a convincing couple.

What is one of your biggest fears as a writer? How do you keep it from holding you back?

My biggest fear as a writer is not being able to finish a story. To keep writer’s block from holding me back, I keep several stories going and switch projects when one gets bogged down.

What would you say is the core message you want to spread through your books? What is the biggest compliment to you as a writer?

I think the core message in my books is love is love and you can find it for yourself regardless of what life throws at you.

The biggest compliment I received as a writer was when a reviewer wrote that she’d never read a paranormal romance before mine and that my book had made her a fan of the genre.

Every book is a learning process and has something to teach you. Do you agree? What did you learn while writing the Legend of the Silver Hunter series?

I agree every book is a learning experience. While writing the Legend of the Silver Hunter series, I learned the value of finding a good editor and a couple of beta readers. Beta readers find places where you mixed up some piece of the timeline or where you’ve failed to explain something important. A good editor catches all the problems like even the best editing software misses.

Who was the inspiration for Kieran Belle and Cory Cooper? Describe these two characters of yours in five words each.

In physical appearance, Kieran Belle was inspired by fashion model, Travis Smith; and a stock image model inspired Cory Cooper. Neither character was inspired by a real person, they’re both sort of amalgamations of romantic lead and action hero.

Do you think an author could write a book they couldn't relate to or weren't emotionally invested in to some extent? Which book in the Legend of the Silver Hunter series was the hardest to write for you, emotional?

Perhaps an author could write a book they’re not emotionally invested in if they’re doing a textbook or ghostwriting someone’s autobiography, but I think you have to relate to your topic or the characters in someway or the story is going to be flat. In the Legend of the Silver Hunter series, writing Witch was the hardest book for me to write because of the emotional and physical abuse I heaped on Kieran at the end of the book. I was actually choking back tears as I wrote the beginning of the climatic battle scene.

What was it about the original Beauty and the Beast story that caught your attention? What were your goals in remaking the story?

The thing that struck me when I read to original version of Beauty and the Beast was the details about Beauty’s family. Originally she had two sisters and three brothers, besides her father. In the original Beauty also returns home to be with her dying father before returning to save the Beast from his curse. I used the additional family members to spin out a lineage of secret mages that would eventually reunite with Beauty’s descendants. I wanted to get away from the Stockholm syndrome feel of the familiar version of Beauty and the Beast and create a fiercer protagonist. I was also seeking to flip the script on the normally patriarchal outcome of fairy tales.

Do you plan on writing your own versions of any other famous fairytales?

Yes, the sequel series Legacy of the Silver Hunter will actually feature three revamped versions of other famous fairytales. I’ll be working with Goldilocks, Red Riding Hood, and Snow White.

Just as Kieran and Cory struggled for their love, what are some ways in which you struggled while trying to get the first book of the series, "Tracker,” published? What did it teach you about book marketing and promoting?

Finding the time to market and promote was big lesson. I found getting to know a few other authors and joining in on multi-author parties on Facebook, was a good start. You need to develop a few fans that are willing to become your street team and post ads and links on different groups.

What was the most memorable scene you wrote in the last book "Hunter"? What are some plot twists that took place in this book that you hadn't anticipated when you first started writing the series?

I think the most memorable scene in Hunter is part of the ending where Kieran gives his father the happy ending he was denied in order for Kieran to be born. A far as plot twist go I think the discovery of how the pact between the House of Beauty and the shifter pack was maintained was one I didn’t see coming until Camille Belle (Kieran’s maternal grandmother) revealed it.

If you don't mind me asking, what is your biggest regret? If you were to turn the clock back twenty years, what would you like to say to your younger self?

It’s hard to say what my biggest regret is because I try not to regret the decisions I’ve made. I strive to learn from each mistake I’ve made. I’d have to go back more than twenty years to tell my younger self to take up the challenge of military service for at least four years, because you’re not really ready for college.

Have brimming questions to ask author Kethric Wilcox? Ask the author whatever you like, but keep in the appropriate zone.
** Please note, unanswered questions will not appear on the page and refrain from posting promotional messages.

The author, a good book and you. Contact Kethric Wilcox here.
** No Spamming: Spam is an irritant to regular users or the authors. Please note that bombarding promotional mails/messages is strictly prohibited. Your IP address may be blocked if found doing so.